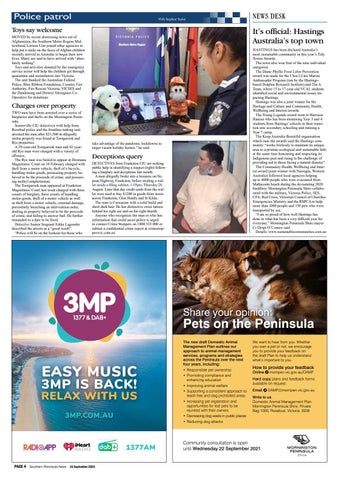 MOVED by recent distressing news out of Afghanistan, the Southern Metro Region Multicultural Liaison Unit joined other agencies to help put a smile on the faces of Afghan children recently arrived in Australia to begin their new lives. Many are said to have arrived with “absolutely nothing”. Toys and activities donated by the emergency service sector will help the children get through quarantine and assimilation into Victoria. The unit thanked the Australian Federal Police, Blue Ribbon Foundation, Country Fire Authority, Fire Rescue Victoria, VICSES and the Dandenong and District Aborigines CoOperative for donations.

HASTINGS has been declared Australia’s most sustainable community in this year’s Tidy Towns Awards. The town also won four of the nine individual categories. The Dame Phyllis Frost Litter Prevention award was made for the I Sea I Care Marine Ambassador Program (run by the Hastingsbased Dolphin Research Institute) and The A Team, where 15 to 17-year-old VCAL students identified social and environmental issues impacting Hastings. Hastings was also a joint winner for the Heritage and Culture and Community Health, Wellbeing and Interest awards. The Young Legends award went to Harrison Hansen who has been mentoring Year 3 and 4 students from Hastings’ schools in their transition into secondary schooling and running a Year 7 camp. The Keep Australia Beautiful organisation which runs the awards said the Hastings community “works tirelessly to maintain its unique area as a pristine ecological and sustainable hub, at the same time honouring and respecting its Indigenous past and rising to the challenge of providing aid to those facing a natural disaster”. The Community Health, Wellbeing and Interest award (joint winner with Narrogin, Western Australia) followed local agencies helping up to 4000 people who were evacuated from Mallacoota beach during the devastating 2020 bushfires. Mornington Peninsula Shire collaborated with the military, Victoria Police, SES, CFA, Red Cross, Victorian Council of Churches Emergencies Ministry and the RSPCA to help more than 1000 people and 150 pets who were transported by sea. “I am so proud of how well Hastings has done in what has been a very difficult year for everyone,” Mornington Peninsula Shire mayor Cr Despi O’Connor said. Details: www.sustainablecommunities.com.au

Charges over property TWO men have been arrested over a series of burglaries and thefts on the Mornington Peninsula. Somerville CIU detectives with help from Rosebud police and the frontline tasking unit arrested the men after $21,500 in allegedly stolen property was found at Tootgarook and Rye properties. A 29-year-old Tootgarook man and 42-yearold Rye man were charged with a variety of offences. The Rye man was bailed to appear at Dromana Magistrates’ Court on 10 February charged with theft from a motor vehicle, theft of a bicycle, handling stolen goods, possessing property believed to be the proceeds of crime, and possessing methyl-amphetamine. The Tootgarook man appeared at Frankston Magistrates’ Court last week charged with three counts of burglary, three counts of handling stolen goods, theft of a motor vehicle as well as theft from a motor vehicle, criminal damage, persistently breaching an intervention order, dealing in property believed to be the proceeds of crime, and failing to answer bail. He further remanded to a date to be fixed. Detective Senior Sergeant Eddie Lagonder described the arrests as a “good result”. “Police will be on the lookout for those who

take advantage of the pandemic lockdowns to target vacant holiday homes,” he said.

Deceptions query DETECTIVES from Frankston CIU are seeking public help in identifying a suspect (right) following a burglary and deceptions last month. A man allegedly broke into a business on Nepean Highway, Frankston, before stealing a wallet inside a filing cabinet, 1.45pm, Thursday 26 August. Later that day credit cards from the wallet were used to buy $1200 in goods from stores across Frankston, Glen Huntly and St Kilda. The man is Caucasian with a solid build and short dark hair. He has distinctive cross tattoos behind his right ear and on his right thumb. Anyone who recognises the man or who has information that could assist police is urged to contact Crime Stoppers on 1800 333 000 or submit a confidential crime report at crimestoppersvic.com.au

Pets on the Peninsula The new draft Domestic Animal Management Plan outlines our approach to animal management services, programs and strategies across the Peninsula over the next four years, including: • Responsible pet ownership • Promoting compliance and enhancing education • Improving animal welfare • Supporting a consistent approach to leash free and dog prohibited areas • Increasing pet registration and opportunities for lost pets to be reunited with their owners • Decreasing dog waste in public places • Reducing dog attacks.

We want to hear from you. Whether you own a pet or not, we encourage you to provide your feedback on the draft Plan to help us understand what’s important to you.

How to provide your feedback Online