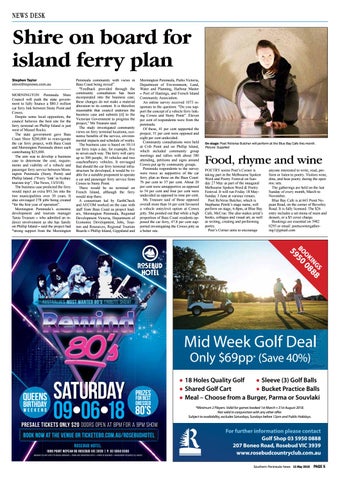 Shire on board for island ferry plan Stephen Taylor steve@mpnews.com.au MORNINGTON Peninsula Shire Council will push the state government to fully finance a $80.3 million car ferry link between Stony Point and Cowes. Despite some local opposition, the council believes the best site for the ferry terminal on Phillip Island is just west of Mussel Rocks. The state government gave Bass Coast Shire $200,000 to reinvigorate the car ferry project, with Bass Coast and Mornington Peninsula shires each contributing $25,000. The aim was to develop a business case to determine the cost, requirements and viability of a vehicle and passenger ferry service between Mornington Peninsula (Stony Point) and Phillip Island. (“Ferry ‘link’ in Sydney tourism trip”, The News, 13/3/18). The business case predicted the ferry would inject an extra $93.3m into the two municipalities over 30 years. It also envisaged 278 jobs being created “for the first year of operation”. Mornington Peninsula’s economic development and tourism manager Tania Treasure – who admitted an indirect involvement as she has family on Phillip Island – said the project had “strong support from the Mornington

Peninsula community with views in Bass Coast being mixed”. “Feedback provided through the community consultation has been incorporated into the business case; these changes do not make a material alteration to its content. It is therefore reasonable that council endorses the business case and submits [it] to the Victorian Government to progress the project,” Ms Treasure said. The study investigated community views on ferry terminal locations, economic benefits of the service, environmental impacts and schedule of works. The business case is based on 10-14 car ferry trips a day, for example, five to seven each way. The ferry will carry up to 300 people, 30 vehicles and two coaches/heavy vehicles. It envisaged that should the car ferry terminal infrastructure be developed, it would be viable for a suitable proponent to operate a car and passenger ferry service from Cowes to Stony Point. There would be no terminal on French Island, although the ferry would stop there. A consortium led by EarthCheck and AECOM worked on the case with staff from Bass Coast as project leaders, Mornington Peninsula, Regional Development Victoria, Department of Economic Development, Jobs, Tourism and Resources, Regional Tourism Boards – Phillip Island, Gippsland and

Mornington Peninsula, Parks Victoria, Department of Environment, Land, Water and Planning, Harbour Master – Port of Hastings, and French Island Community Association. An online survey received 1073 responses to the question: “Do you support the concept of a vehicle ferry linking Cowes and Stony Point”. Eleven per cent of respondents were from the peninsula. Of these, 41 per cent supported the project; 51 per cent were opposed and eight per cent undecided. Community consultations were held at Crib Point and on Phillip Island, which included community group meetings and rallies with about 580 attending, petitions and signs around Cowes put up by community groups. Peninsula respondents to the survey were twice as supportive of the car ferry plan as those on the Bass Coast: 76 per cent to 37 per cent. About 20 per cent were unsupportive as opposed to 54 per cent and four per cent were undecided as opposed to nine per cent. Ms Treasure said of those opposed overall more than 16 per cent favoured a vehicle entry/exit option at Cowes jetty. She pointed out that while a high proportion of Bass Coast residents opposed the car ferry, 47.8 per cent supported investigating the Cowes jetty as a better site.

On stage: Poet ReVerse Butcher will perform at the Blue Bay Cafe this month. Picture: Supplied

anyone interested to write, read, perform or listen to poetry. Visitors wine, dine, and hear poetry during the open mic sets. The gatherings are held on the last Sunday of every month, March to November. Blue Bay Cafe is at 665 Point Nepean Road, on the corner of Beverley Road. It is fully licensed. The $26 entry includes a set menu of main and dessert, or a $5 cover charge. Bookings are essential on 5982 0295 or email: poetscornergathering1@gmail.com