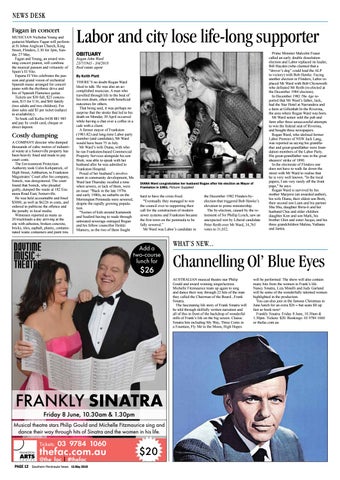 Costly dumping A COMPANY director who dumped thousands of cubic metres of industrial waste at a Somerville property has been heavily fined and made to pay court costs. The Environment Protection Authority took Colin Kirkpatrick, of High Street, Ashburton, to Frankston Magistrates’ Court after his company, Sonick, was deregistered. The court found that Sonick, who pleaded guilty, dumped the waste at 182 Eramosa Road East, Somerville. He was held accountable and fined $5000, as well as $6226 in costs, and ordered to publicise the offence and the penalty in local media. Witnesses reported as many as 20 truckloads a day arriving at the site with asbestos, broken concrete, bricks, tiles, asphalt, plastic, contaminated waste containers and paint tins.

Rogan John Ward 25/7/1943 - 3/4/2018 Real estate agent By Keith Platt THERE’S no doubt Rogan Ward liked to talk. He was also an accomplished musician. A man who travelled through life to the beat of his own drum, often with beneficial outcomes for others. That being said, it was perhaps no surprise that the stroke that led to his death on Monday 30 April occurred while having a chat over a coffee in a cafe with a client. A former mayor of Frankston (1981-82) and long-time Labor party member (and candidate), Mr Ward would have been 75 in July. Mr Ward’s wife Diana, with who he ran Frankston-based Commercial Property Services alongside his son Brett, was able to speak with her husband after he was admitted to Frankston Hospital. Proud of her husband’s involvement in community development, Ms Ward last Thursday recalled a time when sewers, or lack of them, were an issue: “Back in the late 1970s and early 1980s, no suburbs on the Mornington Peninsula were sewered, despite the rapidly growing population. “Scenes of kids around Kananook and Seaford having to wade through untreated sewerage outraged Rogan and his fellow councillor Heikki Mamers, so the two of them fought

DIANA Ward congratulates her husband Rogan after his election as Mayor of Frankston in 1981. Picture: Supplied

hard to have the crisis fixed. “Eventually they managed to win the council over to supporting their call for the construction of modern sewer systems and Frankston became the first town on the peninsula to be fully sewered.” Mr Ward was Labor’s candidate in

the December 1982 Flinders byelection that triggered Bob Hawke’s elevation to prime ministership. The by-election, caused by the retirement of Sir Phillip Lynch, saw an unexpected win by Liberal candidate Peter Reith over Mr Ward, 34,765 votes to 31,052.

Channelling Ol’ Blue Eyes AUSTRALIAN musical theatre star Philip Gould and award winning singer/actress Michelle Fitzmaurice team up again to sing and dance their way through 22 hits of the man they called the Chairman of the Board...Frank Sinatra. The fascinating life story of Frank Sinatra will be told through skilfully written narration and all of this in front of the backdrop of wonderful stills of Frank’s life on the big screen. Classic Sinatra hits including My Way, Three Coins in a Fountain, Fly Me to the Moon, High Hopes

Musical theatre stars Philip Gould and Michelle Fitzmaurice sing and dance their way through hits of Sinatra and the women in his life. Tickets:

Prime Minister Malcolm Fraser called an early double dissolution election and Labor replaced its leader, Bill Hayden (who claimed that a “drover’s dog” could lead the ALP to victory) with Bob Hawke. Facing another election in Flinders, Labor replaced Mr Ward with Bob Chynoweth who defeated Mr Reith (re-elected at the December 1984 election). In December 1982 The Age reported that Mr Ward’s father, Jack, had the Star Hotel at Narrandera and a farm at Gillenbah In the Riverina, the area where Rogan Ward was born. Mr Ward senior sold the pub and farm after three unsuccessful attempts to win the federal seat of Riverina, and bought three newspapers. Rogan Ward, who idolised former Labor Premier of NSW Jack Lang, was reported as saying his grandfather and great-grandfather were foundation members of the Labor Party. His great-grandfather was in the great shearers&#39; strike of 1890. In the electorate of Flinders one does not have to walk far down the street with Mr Ward to realise that he is very well known. &quot;In the local papers, I am very rarely off the front page,&quot; he says. Rogan Ward is survived by his mother Marjorie (an awarded author), his wife Diana, their eldest son Brett, their second son Liam and his partner Shu Shu, daughter Birra-li and her husband Chai and older children daughter Kim and son Mark, his brother Glen and sister Jacqui, and his three grandchildren Malina, Yuthana and Jantra.

will be performed. The show will also contain many hits from the women in Frank’s life. Nancy Sinatra, Liza Minelli and Judy Garland will be some of the wonderfully talented women highlighted in the production. You can also join in the famous Christmas in June lunch for an extra $26 – but seats fill up fast so book now! Frankly Sinatra. Friday 8 June, 10.30am &amp; 1.30pm. Tickets: $20. Bookings: 03 9784 1060 or thefac.com.au