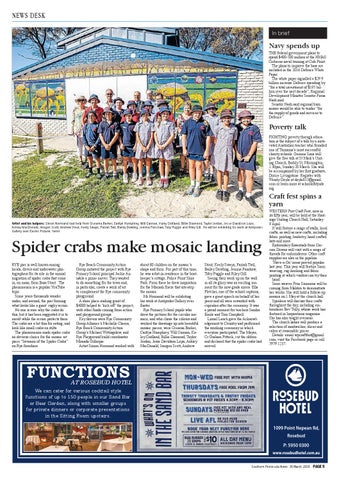 Navy spends up THE federal government plans to spend $400-500 million at the HMAS Cerberus naval training at Crib Point. The plans to improve the base are included in the 2016 Defence White Paper. The white paper signalled a $29.9 billion increase Defence spending by “for a total investment of $195 billion over the next decade”, Regional Development Minister Senator Fiona Nash said. Senator Nash said regional businesses would be able to tender “for the supply of goods and services to Defence”.

Poverty talk FIGHTING poverty through education is the subject of a talk by a motivated Australian teacher who founded one of Tanzania’s most successful charity schools. Gemma Sisia will give the free talk at St Mark’s Uniting Church, Barkly St, Mornington, 2.30pm, Sunday 20 March. She will be accompanied by her first graduate, Dorice Livingstone. Register with Wendy Doyle at doyle815@gmail. com or learn more at schoolofstjude. org

Spider crabs make mosaic landing RYE pier is well known among locals, divers and underwater photographers for its role in the annual migration of spider crabs that come in, on mass, from Bass Strait. The phenomenon is a popular YouTube topic. Some years thousands wander under, and around, the pier forming what looks like a giant rugby scrum. No one is sure why the crabs do this, but it has been suggested it is to moult while the scrum protects them. The crabs are a bit thin for eating, and look like small crabs on stilts. The phenomenon made spider crabs an obvious choice for the mosaic art piece “Invasion of the Spider Crabs” on Rye foreshore.

Rye Beach Community Action Group initiated the project with Rye Primary School principal Jackie Annable a prime mover. They wanted to do something for the town and, in particular, create a work of art to complement the Rye community playground. A shire place-making grant of $4000 helped to ‘kick off’ the project, with other funds coming from action and playground groups. Key drivers were Rye Community Group Alliance’s Mechelle Cheers, Rye Beach Community Action Group’s Michael Wittingslow, and Rye Playground build coordinator Miranda Gillespie. Artist Simon Normand worked with

about 60 children on the mosaic’s shape and form. For part of this time, he was artist-in-residence in the boatkeeper’s cottage, Police Point Shire Park. From there he drew inspiration for the Moonah frieze that sits atop the mosaic. Mr Normand will be exhibiting his work at Antipodes Gallery over Easter. Rye Primary School pupils who drew the pictures for the circular mosaics, and who chose the colours and worked the drawings up into beautiful mosaic pieces, were Ocearna Barker, Caitlyn Humphrey, Will Cannan, Kaley Cridland, Billie Diamond, Taylor Jordan, Jesse Davidson Lopo, Ashley MacDonald, Imogen Scott, Andrew

Stout, Keely Swayn, Faizah Twil, Bailey Dowling, Jemma Fanshaw, Toby Fuggle and Riley Gill. Seeing their work up on the wall in all its glory was an exciting moment for the now grade sixers. Ella Fletcher, one of the school captains, gave a great speech on behalf of her peers and all were rewarded with cupcakes after the ceremony. It was a proud moment for teachers Sandra Emile and Tom Campbell. Lionel Lauch gave the Acknowledgement to Country and performed the smoking ceremony in which everyone participated. The Mayor, Cr Graham Pittock, cut the ribbon and declared that the spider crabs had arrived.

WESTERN Port Craft Fest, now in its fifth year, will be held at the Hastings Uniting Church Hall, Saturday 9 April. It will feature a range of stalls, local crafts, as well as new crafts, including fabric printing, basketry, hand crafted hats and more. Embroidery Essentials from Carrum Downs will visit with a range of threads for embroiderers. Other craft supplies are also in the pipeline. ‘Have-a-Go’ areas proved popular last year. This year will feature Saori weaving, rug-hooking and fabric printing at which visitors can try their hand. Saori weaver Prue Simmons will be coming from Maldon to demonstrate her works. She will hold a follow-up session on 1 May at the church hall. Speakers will discuss their crafts throughout the day, including embroiderer Bev Tully, whose work has featured in Inspirations magazine. She has also taught overseas. The church ladies will produce a selection of sandwiches, slices and cakes at reasonable prices. Details: email wpcraftfest@gmail. com, visit the Facebook page or call 5979 1237.

We can cater for various cocktail style functions of up to 150 people in our Sand Bar or Beer Garden, along with smaller groups for private dinners or corporate presentations in the Sitting Room upstairs.