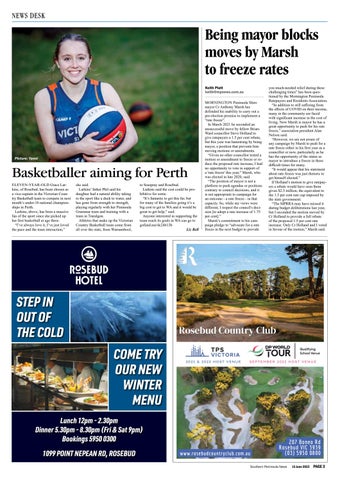 Basketballer aiming for Perth ELEVEN-YEAR-OLD Grace Larkins, of Rosebud, has been chosen as a vice-captain in the Victorian Country Basketball team to compete in next month’s under-16 national championships in Perth. Larkins, above, has been a massive fan of the sport since she picked up her first basketball at age three. “I’ve always love it, I’ve just loved the pace and the team interaction,”

she said. Larkins’ father Phil said his daughter had a natural ability taking to the sport like a duck to water, and has gone from strength to strength, playing regularly with her Peninsula Grammar team and training with a team in Traralgon. Athletes that make up the Victorian Country Basketball team come from all over the state, from Warnambool,

to Seaspray and Rosebud. Larkins said the cost could be prohibitive for some. “It’s fantastic to get this far, but for many of the families going it’s a big cost to get to WA and it would be great to get help,” said. Anyone interested in supporting the team reach its goals in WA can go to gofund.me/dc24613b Liz Bell

STEP IN OUT OF THE COLD

MORNINGTON Peninsula Shire mayor Cr Anthony Marsh has defended his inability to carry out a pre-election promise to implement a “rate freeze”. In March 2021 he seconded an unsuccessful move by fellow Briars Ward councillor Steve Holland to give ratepayers a 1.5 per cent rebate, but this year was hamstrung by being mayor, a position that prevents him moving motions or amendments. “Given no other councillor tested a motion or amendment to freeze or reduce the proposed rate increase, I had no opportunity to vote in support of a &#39;rate freeze&#39; this year,” Marsh, who was elected in late 2020, said. “The position of mayor is not a platform to push agendas or positions contrary to council decisions, and it is not appropriate to campaign for an outcome - a rate freeze - in that capacity. So, while my views were different, I respect the council&#39;s decision [to adopt a rate increase of 1.75 per cent].” Marsh’s commitment to his campaign pledge to “advocate for a rate freeze in the next budget to provide

you much-needed relief during these challenging times” has been questioned by the Mornington Peninsula Ratepayers and Residents Association. “In addition to still suffering from the effects of COVID on their income, many in the community are faced with significant increase in the cost of living. Now Marsh is mayor he has a great opportunity to push for his rate freeze,” association president Alan Nelson said. “However, we are not aware of any campaign by Marsh to push for a rate freeze either in his first year as a councillor or now, particularly as he has the opportunity of the status as mayor to introduce a freeze in these difficult times for many. “It would appear that his statement about rate freeze was just rhetoric to get himself elected.” If Holland’s motion to give ratepayers a rebate would have seen them given $2.3 million, the equivalent to the 1.5 per cent rate cap imposed by the state government. “The MPRRA may have missed it during budget deliberations last year, but I seconded the motion moved by Cr Holland to provide a full rebate of the proposed 1.5 per cent rate increase. Only Cr Holland and I voted in favour of the motion,” Marsh said.