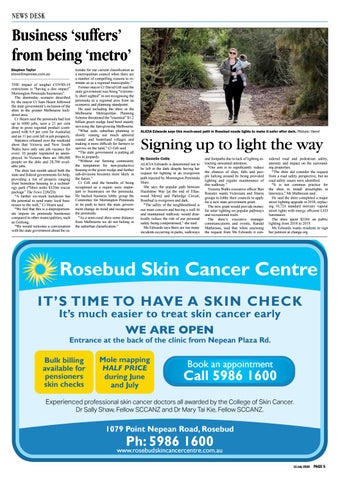 Business ‘suffers’ from being ‘metro’ Stephen Taylor steve@mpnews.com.au THE impact of tougher COVID-19 restrictions is “having a dire impact” Mornington Peninsula businesses”. The doomsday scenario described by the mayor Cr Sam Hearn followed the state government’s inclusion of the shire in the greater Melbourne lockdown area. Cr Hearn said the peninsula had lost up to 6000 jobs, seen a 21 per cent drop in gross regional product (compared with 6.9 per cent for Australia) and an 11 per cent fall in job prospects. Statistics released over the weekend show that Victoria and New South Wales have only one job vacancy for every 10 people registered as unemployed. In Victoria there are 389,000 people on the dole and 28,700 available jobs. The shire last month asked both the state and federal governments for help, providing a list of projects ranging from homeless housing to a technology park (“Shire seeks $320m rescue package” The News 22/6/20). “A further six-week lockdown has the potential to send many local businesses to the wall,” Cr Hearn said. “We feel that this is a disproportionate impost on peninsula businesses compared to other municipalities, such as Geelong. “We would welcome a conversation with the state government about the ra-

tionale for our current classification as a metropolitan council when there are a number of compelling reasons to reinstate us as a regional municipality.” Former mayor Cr David Gill said the state government was being “extremely short sighted” in not recognising the peninsula as a regional area from an economic and planning standpoint. He said including the shire in the Melbourne Metropolitan Planning Scheme threatened the “essential” $1.2 billion green wedge food bowl mainly servicing the fast-growing Melbourne. “What suits suburban planning is slowly ruining our much admired coastal and hinterland villages and making it more difficult for farmers to survive on the land,” Cr Gill said. “The state government is putting all this in jeopardy. “Without our farming community the temptation for non-productive housing in the green wedge and further sub-divisions becomes more likely in the future.” Cr Gill said the benefits of being recognised as a region were important to businesses on the peninsula. He backed business lobby group the Committee for Mornington Peninsula in its push to have the state government change its mind and recategorise the peninsula. “As a semi-rural shire some distance from Melbourne we do not belong in the suburban classification.”

Signing up to light the way By Danielle Collis ALICIA Edwards is determined not to be left in the dark despite having her request for lighting in an overgrown path rejected by Mornington Peninsula Shire. She says the popular path between Hazeldene Way [at the end of Ellaswood Mews] and Parkedge Circuit, Rosebud is overgrown and dark. “The safety of the neighbourhood is our main concern and having a well lit and maintained walkway would drastically reduce the risk of our personal safety being compromised,” she said. Ms Edwards says there are too many incidents occurring in parks, walkways

and footpaths due to lack of lighting attracting unwanted attention. “Our aim is to significantly reduce the chances of slips, falls and people lurking around by being provided lighting and regular maintenance of this walkway.” Victoria Walks executive officer Ben Rossiter wants Victorians and fitness groups to lobby their councils to apply for a new state government grant. The new grant would provide money for solar lighting on popular pathways and recreational trails. The shire’s executive manager communications and events, Randal Mathieson, said that when assessing the request from Ms Edwards it con-

sidered road and pedestrian safety, amenity and impact on the surrounding properties. “The shire did consider the request from a road safety perspective, but no road safety issues were identified. “It is not common practice for the shire to install streetlights in laneways,” Mr Mathieson said. He said the shire completed a major street lighting upgrade in 2018, replacing 10,724 standard mercury vapour street lights with energy efficient LED luminaires. The shire spent $2266 on public lighting from 2018 to 2019. Ms Edwards wants residents to sign her petition at change.org.

Rosebud Skin Cancer Centre IT’S TIME TO HAVE A SKIN CHECK It’s much easier to treat skin cancer early WE ARE OPEN Entrance at the back of the clinic from Nepean Plaza Rd.

Mole mapping HALF PRICE during June and July