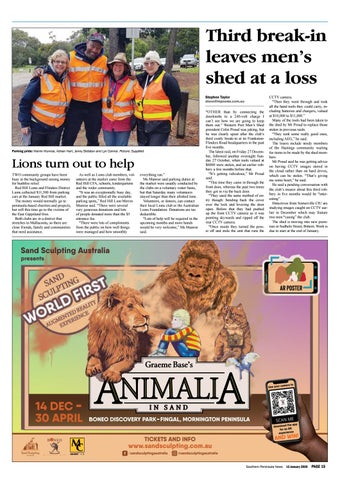 Lions turn out to help TWO community groups have been busy in the background raising money for bushfire relief. Red Hill Lions and Flinders District Lions collected $11,500 from parking cars at the January Red Hill market. The money would normally go to peninsula-based charities and projects, but will this time go to the victims of the East Gippsland fires. Both clubs are in a district that stretches to Mallacoota, so there are close friends, family and communities that need assistance.

As well as Lions club members, volunteers at the market came from the Red Hill CFA, schools, kindergartens and the wider community. “It was an exceptionally busy day, and the public filled all the available parking spots,” Red Hill Lion Merrin Munroe said. “There were several very generous donations and lots of people donated more than the $5 entrance fee. “There were lots of compliments from the public on how well things were managed and how smoothly

everything ran.” Ms Munroe said parking duties at the market were usually conducted by the clubs on a voluntary roster basis, but that Saturday many volunteers stayed longer than their allotted time. Volunteers, or donors, can contact their local Lions club or the Australian Lions Foundation. Donations are tax deductible. “Lots of help will be required in the upcoming months and more hands would be very welcome,” Ms Munroe said.

“OTHER than by connecting the doorknobs to a 240-volt charge I can’t see how we are going to keep them out.” Western Port Men’s Shed president Colin Proud was joking, but he was clearly upset after the club’s third costly break-in at its FrankstonFlinders Road headquarters in the past five months. The latest raid, on Friday 27 December, followed another overnight Sunday 27 October, when tools valued at $6000 were stolen, and an earlier robbery a few months before that. “It’s getting ridiculous,” Mr Proud said. “This time they came in through the front door, whereas the past two times they got in via the back door. “They used the same method of entry though: bending back the cover over the lock and levering the door open. Before that they had pushed up the front CCTV camera so it was pointing skywards and ripped off the rear CCTV camera. “Once inside they turned the power off and stole the unit that runs the

CCTV camera. “Then they went through and took all the hand tools they could carry, including batteries and chargers, valued at $10,000 to $11,000.” Many of the tools had been taken to the shed by Mr Proud to replace those stolen in previous raids. “They took some really good ones, including AEG,” he said. The losers include needy members of the Hastings community waiting for items to be made by the shed members. Mr Proud said he was getting advice on having CCTV images stored in the cloud rather than on hard drives, which can be stolen. “That’s giving me some heart,” he said. He said a pending conversation with the club’s insurer about this third robbery in five months would be “interesting”. Detectives from Somerville CIU are studying images caught on CCTV earlier in December which may feature two men “casing” the club. The shed is moving into new premises in Sudholz Street, Bittern. Work is due to start at the end of January.