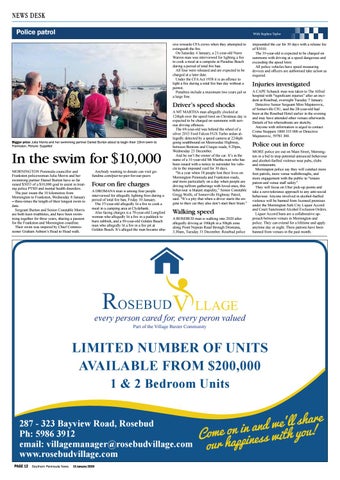 sive towards CFA crews when they attempted to extinguish the fire. On Saturday 4 January, a 21-year-old Narre Warren man was interviewed for lighting a fire to cook a meal at a campsite at Paradise Beach during a period of total fire ban. All four were released and are expected to be charged at a later date. Under the CFA Act 1958 it is an offence to light a fire during a total fire ban day without a permit. Penalties include a maximum two years jail or a large fine.

Bigger prize: Julia Morris and her swimming partner Daniel Burton about to begin their 10km swim to Frankston. Picture: Supplied

In the swim for $10,000 MORNINGTON Peninsula councillor and Frankston policewoman Julia Morris and her swimming partner Daniel Burton have so far raised $5055 of a $10,000 goal to assist in treating police PTSD and mental health disorders. The pair swam the 10 kilometres from Mornington to Frankston, Wednesday 8 January – three-times the length of their longest swim to date. Sergeant Burton and Senior Constable Morris are both keen triathletes, and have been swimming together for three years, sharing a passion for the Frankston and Mornington coastline. Their swim was inspired by Chief Commissioner Graham Ashton’s Head to Head walk.

Anybody wanting to donate can visit gofundme.com/pier-to-pier-for-our-peers

A MT MARTHA man allegedly clocked at 124kph over the speed limit on Christmas day is expected to be charged on summons with serious driving offences. The 69-year-old was behind the wheel of a silver 2015 Ford Falcon FGX Turbo sedan allegedly detected by a speed camera at 224kph going southbound on Moorooduc Highway, between Bentons and Craigie roads, 9.20pm, Wednesday 25 December. And he isn’t the owner of the car: It’s in the name of a 31-year-old Mt Martha man who has been issued with a notice to surrender his vehicle to the impound yard for 30 days. “In a year when 18 people lost their lives on Mornington Peninsula and Frankston roads, and more particularly on a day when people are driving to/from gatherings with loved ones, this behaviour is blatant stupidity,” Senior Constable Gregg Wolfe, of Somerville Highway Patrol, said. “It’s a pity that when a driver starts the engine to their car they also don’t start their brain.”

Walking speed A ROSEBUD man is walking into 2020 after allegedly driving at 106kph in a 50kph zone along Point Nepean Road through Dromana, 3.30am, Tuesday 31 December. Rosebud police

impounded the car for 30 days with a release fee of $1010. The 35-year-old is expected to be charged on summons with driving at a speed dangerous and exceeding the speed limit. All police vehicles have speed measuring devices and officers are authorised take action as required.

Injuries investigated A CAPE Schanck man was taken to The Alfred hospital with “significant injuries” after an incident at Rosebud, overnight Tuesday 7 January. Detective Senior Sergeant Miro Majstorovic, of Somerville CIU, said the 28-year-old had been at the Rosebud Hotel earlier in the evening and may have attended other venues afterwards. Details of his whereabouts are sketchy. Anyone with information is urged to contact Crime Stoppers 1800 333 000 or Detective Majstorovic, 59781 300.

Police out in force MORE police are out on Main Street, Mornington in a bid to stop potential antisocial behaviour and alcohol-fuelled violence near pubs, clubs and restaurants. Mornington police say they will conduct more foot patrols, more venue walkthroughs, and more engagement with the public to “ensure patron and venue staff safety”. They will focus on Uber pick-up points and take a zero-tolerance approach to any anti-social behaviour. Anyone involved in alcohol-fuelled violence will be banned from licensed premises under the Mornington Safe City Liquor Accord and Court Sanctioned Alcohol Exclusion Orders. Liquor Accord bans are a collaborative approach between venues in Mornington and police. They can extend for a lifetime and apply anytime day or night. Three patrons have been banned from venues in the past month.