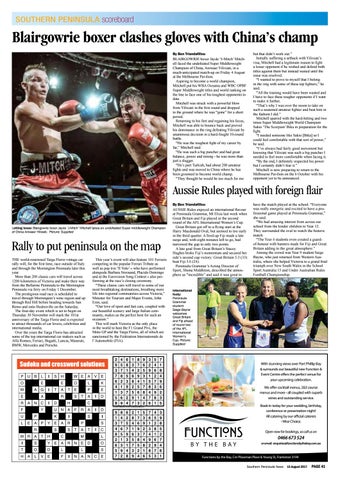 Blairgowrie boxer clashes gloves with China’s champ but that didn’t work out.” Initially suffering a setback with Yilixiati’s visa, Mitchell had a legitimate reason to fight a lesser opponent if he wished and defend both titles against them but instead waited until the issue was resolved. “I wanted to prove to myself that I belong in the ring with some of these top fighters,” he said. “All the training would have been wasted and I have to face these tougher opponents if I want to make it further. “That’s why I was over the moon to take on such a seasoned amateur fighter and beat him in the fashion I did.” Mitchell sparred with the hard-hitting and two times Super Middleweight World Champion Sakio ‘The Scorpion’ Bika in preparation for the fight. “I needed someone like Sakio [Bika] so I could feel comfortable with that sort of power,” he said. “I’ve always had fairly good movement but knowing that Yilixiati was such a big puncher I needed to feel more comfortable when facing it. “By the end, I definitely respected his power but I certainly didn’t fear it.” Mitchell is now preparing to return to the Melbourne Pavilion on the 6 October with his opponent yet to be announced.

By Ben Triandafillou BLAIRGOWRIE boxer Jayde ‘J-Mitch’ Mitchell faced the undefeated Super Middleweight Champion of China, Aniwaer Yilixiati, in a much-anticipated match-up on Friday 4 August at the Melbourne Pavilion. Aspiring to become a world champion, Mitchell put his WBA Oceania and WBC OPBF Super Middleweight titles and world ranking on the line to face one of his toughest opponents to date. Mitchell was struck with a powerful blow from Yilixiati in the first round and dropped to the ground where he was “gone” for a short period. Returning to his feet and regaining his focus, Mitchell was able to bounce back and proved his dominance in the ring defeating Yilixiati by unanimous decision in a hard-fought 10-round battle. “He was the toughest fight of my career by far,” Mitchell said. “He was such a big puncher and had great balance, power and timing - he was more than just a slugger. “He’s part Turkish, had about 200 amateur fights and was moved to China where he has been groomed to become world champ. “They thought he would be too much for me

Rally to put peninsula on the map THE world-renowned Targa Florio vintage car rally will, for the first time, race outside of Italy and through the Mornington Peninsula later this year. More than 200 classic cars will travel across 1200 kilometres of Victoria and make their way from the Bellarine Peninsula to the Mornington Peninsula via ferry on Friday 1 December. The prestigious road race is scheduled to travel through Mornington’s wine region and up through Red Hill before heading towards San Remo and onto Healesville on the Saturday. The four-day event which is set to begin on Thursday 30 November will mark the 101st anniversary of the Targa Florio and is expected to attract thousands of car lovers, celebrities and international media. Over the years the Targa Florio has attracted some of the top international car makers such as Alfa Romeo, Ferrari, Bugatti, Lancia, Maserati, BMW, Mercedes and Porsche.

This year’s event will also feature 101 Ferraris competing in the popular Ferrari Tribute as well as pop trio ‘Il Volo’ – who have performed alongside Barbara Streisand, Placido Domingo and at the Eurovision Song Contest – also performing at the race’s closing ceremony. “These classic cars will travel to some of our most breathtaking destinations, breathing more life into regional communities across Victoria,” Minister for Tourism and Major Events, John Eren, said. “Our love of sport and fast cars, coupled with our beautiful scenery and large Italian community, makes us the perfect host for such an occasion.” This will mark Victoria as the only place in the world to host the F1 Grand Prix, the Moto GP and the Targa Florio, all of which are sanctioned by the Fédération Internationale de l’Automobile (FIA).

By Ben Triandafillou AUSSIE Rules enjoyed an international flavour at Peninsula Grammar, Mt Eliza last week when Great Britain and Fiji played in the second round of the AFL International Women’s Cup. Great Britain got off to a flying start at the Harry Macdonald Oval, but seemed to tire early in the third quarter. A fired-up Fiji made a late surge and, with eight minutes left to go, had narrowed the gap to only two points. A late goal from Great Britain’s Stacey Hughes broke Fiji’s momentum and secured her side’s second cup victory: Great Britain 5.3 (33) beat Fiji 3.6 (24). Peninsula Grammar’s Acting Director of Sport, Shona Middleton, described the atmosphere as “incredible” and said it was great to

have the match played at the school. “Everyone was really energetic and excited to have a professional game played at Peninsula Grammar,” she said. “We had amazing interest from across our school from the kinder children to Year 12. They surrounded the oval to watch the historic match. “The Year 4 students even created a guardof-honour with banners made for Fiji and Great Britain adding to the great atmosphere.” Among the crowd was Year 9 student Saige Bayne, who just returned from Western Australia, where she helped Victoria to a grand final triumph over New South Wales in the School Sport Australia 15 and Under Australian Rules Football Championship.