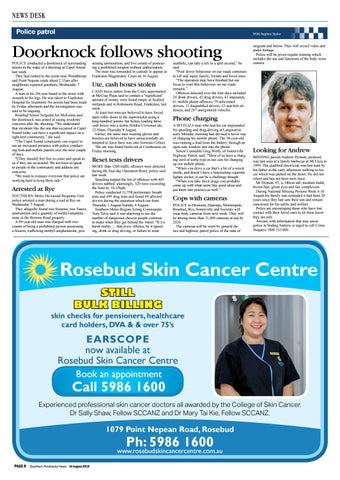 POLICE conducted a doorknock of surrounding streets in the wake of a shooting at Capel Sound last week. They had rushed to the scene near Woodthorpe and Point Nepean roads about 2.55am after neighbours reported gunshots, Wednesday 7 August. A man in his 20s was found in the street with wounds to his legs. He was taken to Frankston Hospital for treatment. No arrests had been made by Friday afternoon and the investigation was said to be ongoing. Rosebud Senior Sergeant Jen McKenna said the doorknock was aimed at easing residents’ concerns after the shooting. “We understand that incidents like the one that occurred in Capel Sound today can have a significant impact on a tight-knit community,” she said. “The Capel Sound community can expect to see an increased presence with police conducting foot-and-mobile patrols over the next couple of days. “[They should] feel free to come and speak to us if they see us around. We are keen to speak to people in the community and address any concerns. “We want to reassure everyone that police are working hard to keep them safe.”

Arrested at Rye SOUTHERN Metro Divisional Response Unit police arrested a man during a raid at Rye on Wednesday 7 August. They allegedly found two firearms, two Tasers, ammunition and a quantity of methyl-amphetamine at the Browns Road property. A 49-year-old man was charged with two counts of being a prohibited person possessing a firearm, trafficking methyl-amphetamine, pos-

sessing ammunition, and five counts of possessing a prohibited weapon without authorisation. The man was remanded in custody to appear at Frankston Magistrates’ Court on 16 August.

Ute, cash boxes stolen CASH boxes stolen from the Coles supermarket at McCrae Plaza said to contain a “significant” amount of money were found empty at Seaford wetlands and in Robinsons Road, Frankston, last week. At least two men are believed to have forced open roller doors to the supermarket using a long-handled jemmy bar before loading three cash boxes into a stolen Holden Crewman ute, 12.30am, Thursday 8 August. Earlier, the same men wearing gloves and hoodies are believed to have unsuccessfully attempted to force their way into Sorrento Cellars. The ute was found burnt-out at Cranbourne on Friday morning.

Reset tests drivers MORE than 1200 traffic offences were detected during the four-day Operation Reset, police said last week. Speeding topped the list of offences with 405 drivers nabbed: alarmingly, 320 were exceeding the limit by 10-25kph. Police conducted 11,758 preliminary breath tests and 499 drug tests and found 69 affected drivers during the operation which ran from Thursday 1 August-Sunday 4 August. Southern Metro Region Acting Commander Tony Silva said it was alarming to see the number of dangerous choices people continue to make when they get behind the wheel. “It’s a harsh reality … that every offence, be it speeding, drink or drug driving, or failure to wear

seatbelts, can take a life in a split second,” he said. “Poor driver behaviour on our roads continues to kill and injure family, friends and loved ones. “The operation may have finished but our focus to reset this behaviour on our roads remains.” Offences detected over the four days included 24 drink drivers, 45 drug drivers, 43 impounds, 61 mobile phone offences, 79 unlicensed drivers, 12 disqualified drivers, 12 seat belt offences, and 207 unregistered vehicles.

sergeant and below. They will record video and audio footage. Police will be given regular training which includes the use and functions of the body worn camera.

Phone charging A MT ELIZA man who had his car impounded for speeding and drug-driving at Langwarrin early Monday morning had devised a novel way of charging his mobile phone. The 38-year-old was running a lead from the battery, through an open side window and into the phone. Senior Constable Greg Wolfe, of Somerville Highway Patrol, said: “Most of us have a charging cord of some type in our cars for charging up our mobile phone. “When you drive a car that’s a bit of a wreck inside, and doesn’t have a functioning cigarette lighter socket, it can be a challenge though. “When you take illicit drugs you probably come up with what seem like good ideas and put them into practice as well.”

Cops with cameras POLICE at Dromana, Hastings, Mornington, Rosebud, Rye, Somerville and Sorrento will wear body cameras from next week. They will be among more than 11,000 cameras in use by 2020. The cameras will be worn by general duties and highway patrol police of the rank of

Looking for Andrew MISSING person Andrew Dymott, pictured, was last seen at a family barbecue at Mt Eliza in 1999. The qualified electrician was last seen by his father in the early afternoon walking to his car which was parked on the street. He did not return and has not been seen since. Mr Dymott, 47, is 180cm tall, medium build, brown hair, green eyes and fair complexion. During National Missing Persons Week 4-10 August his family was reminded it had been 20 years since they last saw their son and remain concerned for his safety and welfare. Police are encouraging those who have lost contact with their loved ones to let them know they are safe. Anyone with information that may assist police in finding Andrew is urged to call Crime Stoppers 1800 333 000.