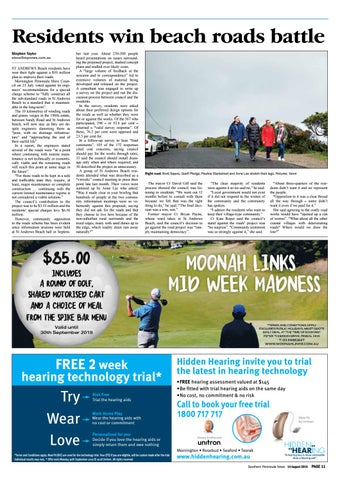 Residents win beach roads battle Stephen Taylor steve@mpnews.com.au ST ANDREWS Beach residents have won their fight against a $10 million plan to improve their roads. Mornington Peninsula Shire Council on 23 July voted against its engineers’ recommendation for a special charge scheme to “fully construct all the sub-standard roads in St Andrews Beach to a standard that is maintainable in the long-term”. The 10 kilometres of winding roads and grassy verges in the 1960s estate, between Sandy Road and St Andrews beach, will now stay as they are despite engineers slamming them as “poor, with no drainage infrastructure” and “approaching the end of their useful life”. In a report, the engineers stated several of the roads were “at a point where continuing with routine maintenance is not technically or economically viable and the remaining roads will reach this point at some stage in the future”. “For these roads to be kept in a safe and trafficable state they require, at least, major maintenance or complete construction … continuing with the current limited maintenance regime is not considered a viable solution.” The council’s contribution to the project was to be $3.53 million and the residents’ special charges levy $6.56 million. However, community opposition to the roads scheme has been evident since information sessions were held at St Andrews Beach hall in Septem-

ber last year. About 250-300 people heard presentations on issues surrounding the proposed project, studied concept plans and mulled over likely costs. A “large volume of feedback at the sessions and in correspondence” led to extensive volumes of material being developed and released on the project. A consultant was engaged to write up a survey on the project and run the discussion process between council and the residents. In the survey, residents were asked about their preferred design options for the roads as well as whether they were for or against the works. Of the 567 who participated, 298 – or 52.6 per cent – returned a “valid survey response”. Of these, 76.5 per cent were opposed and 23.5 per cent for. In a follow-up survey to hear “final comments”, 105 of the 172 responses cited cost concerns, saying council should pay for the works through rates; 35 said the council should install drainage only when and where required; and 30 described the project as unnecessary. A group of St Andrews Beach residents attended what was described as a “vitriolic” council meeting to press their point late last month. Their views were summed up by Anne Lee who asked: “Was it made clear in your briefing that hundreds of people at the two community information meetings were so vehemently against this proposal, saying they did not ask for the roads and that they choose to live here because of the non-suburban rural surrounds and the treed edges, many with sand dunes up to the edge, which readily drain rain away naturally?”

The mayor Cr David Gill said the process showed the council was listening to residents. “We went out 12 months before to consult with them because we felt that was the right thing to do,” he said. “The final decision was a win, win.” Former mayor Cr Bryan Payne, whose ward takes in St Andrews Beach, said the council’s decision to go against the road project was “simply maintaining democracy”.

“The clear majority of residents were against it so we said no,” he said. “Local government would not exist if it did not respond to the wishes of the community and the community has spoken. “I admire the residents who want to keep their village-type community.” Cr Kate Roper said the council’s stand against the roads’ project was “no surprise”. “Community sentiment was so strongly against it,” she said.

*Terms and Conditions apply. Moxi Fit (RIC) are used for the technology trial. Your (ITE) if you are eligible, will be custom made after the trial. Individual results may vary. ^ Offer ends Monday 30th September 2019 © 2018 Unitron. All rights reserved

“About three-quarters of the residents didn’t want it and we represent the people. “Opposition to it was a clear thread all the way through – some didn’t want it even if we paid for it.” She said agreeing to the costly road works would have “opened up a can of worms”. “What about all the other coastal villages with deteriorating roads? Where would we draw the line?”