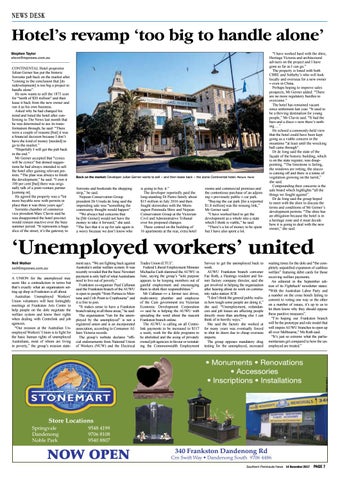 Hotel’s revamp ‘too big to handle alone’ Stephen Taylor steve@mpnews.com.au CONTINENTAL Hotel proprietor Julian Gerner has put the historic Sorrento pub back on the market after “coming to the conclusion that [its redevelopment] is too big a project to handle alone”. He now wants to sell the 1875 icon for “north of $20 million” and then lease it back from the new owner and run it as his own business. Asked why he had changed his mind and listed the hotel after confirming to The News last month that he was determined to see its transformation through, he said: “There were a couple of reasons [but] it was a financial decision because I don’t have the kind of money [needed] to go to the market.” “Hopefully I will get the pub back in the end.” Mr Gerner accepted that “cynics will be cynics” but denied suggestions he had always intended to sell the hotel after gaining relevant permits. “The plan was always to finish the development,” he said. “I own it 100 per cent [but] there was originally talk of a joint-venture partner [coming in]. He agreed the property was a “lot more buyable now with permits in place than it was three years ago”. Sorrento chamber of commerce vice president Marc Clavin said he was disappointed the hotel precinct would remain inactive over the busy summer period. “It represents a huge slice of the street; it’s the gateway to

Back on the market: Developer Julian Gerner wants to sell – and then lease back – the iconic Continental hotel. Picture: Yanni

Sorrento and bookends the shopping strip,” he said. Nepean Conservation Group president Dr Ursula de Jong said the impending sale was “something the community thought would happen”. “We always had concerns that he [Mr Gerner] would not have the money to take it forward,” she said. “The fact that it is up for sale again is a worry because we don’t know who

is going to buy it.” The developer reportedly paid the long-standing Di Pietro family about $15 million in July 2016 and then fought skirmishes with the Mornington Peninsula Shire and Nepean Conservation Group at the Victorian Civil and Administrative Tribunal over his proposed changes. These centred on the building of 16 apartments at the rear, extra hotel

rooms and commercial premises and the contentious purchase of an adjoining – previously public – car park. “Buying the car park [for a reported $1.8 million] was the missing link,” Mr Gerner said. “I have worked hard to get the development as a whole into a state which I think is viable,” he said. “There’s a lot of money to be spent but I have also spent a lot.

“I have worked hard with the shire, Heritage Victoria and architectural advisers on the project and I have gone as far as I can go.” The property is listed with both CBRE and Sotheby’s who will look locally and overseas for a new owner – even in China. Perhaps hoping to improve sales prospects, Mr Gerner added: “There are no more regulatory hurdles to overcome.” The hotel has remained vacant since settlement last year. “It used to be a thriving destination for young people,” Mr Clavin said. “It had the bars and a disco – now there’s nothing …” He echoed a commonly-held view that the hotel could have been kept going as a viable concern in the meantime “at least until the wrecking ball came through”. Dr de Jong said the state of the façade of the historic building, which is on the state register, was disappointing. “The limestone is failing, the windows are rotting, the stucco is coming off and there is a tonne of vegetation growing on the turret,” she said. Compounding their concerns is the sale board which highlights “all the things we fought against”. Dr de Jong said the group hoped to meet with the shire to discuss the terms and conditions of Mr Gerner’s development permits. “The shire has an obligation because the hotel is in a heritage zone and it must decide how it is going to deal with the new owner,” she said.

‘Unemployed workers’ united Neil Walker neil@mpnews.com.au A UNION for the unemployed may seem like a contradiction in terms but that’s exactly what an organisation setting up shop in Frankston is all about. Australian Unemployed Workers’ Union volunteers will host fortnightly meetings at Frankston Arts Centre to help people on the dole negotiate the welfare system and know their rights when dealing with Centrelink and job agencies. “Our mission at the Australian Unemployed Workers’ Union is to fight for the basic human rights of unemployed Australians, most of whom are living in poverty,” the group’s mission state-

ment says. “We are fighting back against Australia’s unfair welfare system. It was recently revealed that the basic Newstart payment is only half of what Australians need to live out of poverty.” Frankston co-organiser Paul Callanan said the Frankston branch of the AUWU is open to people “from Portsea to Mentone and Crib Point to Cranbourne” and it is free to join. “It makes sense to have a Frankston branch taking in all those areas,” he said. The organisation “run for the unemployed by the unemployed” is not a registered union and is an incorporated association, according to Consumer Affairs Victoria records. The group’s website declares “official endorsements from National Union of Workers (NUW) and the Electrical

Trades Union (ETU)”. Federal Liberal Employment Minister Michaelia Cash slammed the AUWU in June, saying the group’s “sole purpose appears to be keeping members out of gainful employment and encouraging them to shirk their responsibilities.” Mr Callanan — a former taxi driver, multi-storey plumber and employee of the Cain government era Victorian Economic Development Corporation — said he is helping the AUWU with spreading the word about the nascent Frankston branch online. The AUWU is calling on all Centrelink payments to be increased to $517 a week; work for the dole programs to be abolished and the axing of privately owned job agencies in favour or reinstating the Commonwealth Employment

Service to get the unemployed back to work. AUWU Frankston branch convener Fae Roth, a Hastings resident and former factory company director, said she got involved in helping the organisation after hearing about its work on community radio station 3CR. “I don’t think the general public realises how tough some people are doing it,” she said. “Unemployment, redundancies and job losses are affecting people directly more than anything else I can think of in horrific ways.” She said the factory she worked at for many years was eventually forced to shut its doors due to cheap overseas imports. The group opposes mandatory drug testing for the unemployed, increased

waiting times for the dole and “the completely unjustified expansion of cashless welfare” featuring debit cards for those receiving welfare payments. An editorial in the September edition of its Fightback! newsletter states: “With the Australian Labor Party and a number on the cross bench failing to commit to voting one way or the other on a number of issues, it’s up to us to let them know why they should oppose these punitive measures”. “I’m hoping our Frankston branch will be the prototype and role model that will inspire AUWU branches to open up all over Melbourne,” Ms Roth said. “It’s just so extreme what the parliamentarians get compared to how the unemployed are treated.”