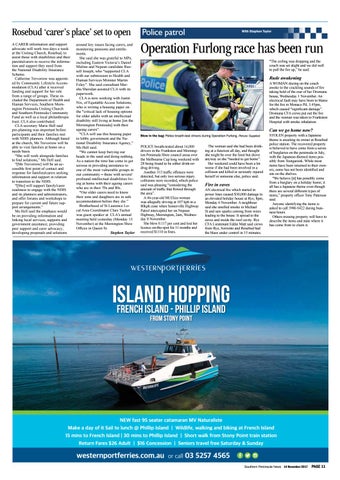 Rosebud ‘carer’s place’ set to open A CARER information and support advocate will work two days a week at the Uniting Church, Rosebud, to assist those with disabilities and their parents/carers to receive the information and support they need from the National Disability Insurance Scheme. Catherine Trevorrow was appointed by Community Lifestyle Accommodation (CLA) after it received funding and support for her role from a range of groups. These included the Department of Health and Human Services, Southern Mornington Peninsula Uniting Church and Southern Peninsula Community Fund as well as a local philanthropic trust. CLA also contributed. CLA secretary Marie Hell said pre-planning was important before participants and their families met with NDIS planners. Although based at the church, Ms Trevorrow will be able to visit families at home on a needs basis. “She will work alongside families to find solutions,” Ms Hell said. “[Ms Trevorrow] will be an accessible first point of contact and response for families/carers seeking information and support in relation to transition to the NDIS. “[She] will support family/carer readiness to engage with the NDIS and its planners and administrators, and offer forums and workshops to prepare for current and future support arrangements.” Ms Hell said the emphasis would be on providing information and linking local services, supports and government assistance; providing peer support and carer advocacy; developing proposals and solutions

around key issues facing carers, and monitoring pensions and entitlements. She said she was grateful to MPs, including Eastern Victoria’s Daniel Mulino and Nepean candidate Russell Joseph, who “supported CLA with our submission to Health and Human Services Minister Martin Foley”. She said consultant Marsha Sheridan assisted CLA with its paperwork. CLA is now working with Justin Nix, of Equitable Access Solutions, who is writing a housing paper on the “critical lack of housing options for older adults with an intellectual disability still living at home [on the Mornington Peninsula] with their ageing carers”. “CLA will use this housing paper to lobby government and the National Disability Insurance Agency,” Ms Hell said. “We cannot keep burying our heads in the sand and doing nothing. As a nation the time has come to get serious in providing assistance to one of the most vulnerable groups in our community – those with severe/ profound intellectual disabilities living at home with their ageing carers who are in their 70s and 80s. “Our older carers need to know their sons and daughters are in safe accommodation before they die.” Brotherhood of St Laurence Local Area Coordinator Clare Tucker was guest speaker at CLA’s annual meeting held yesterday (Monday 13 November) at the Mornington Shire Offices in Queen St. Stephen Taylor

Operation Furlong race has been run “The ceiling was dropping and the couch was set alight and we did well to pull the fire up,” he said.

A WOMAN dozing on the couch awoke to the crackling sounds of fire taking hold of the rear of her Dromana house, Wednesday 1 November. An electrical fault may have been to blame for the fire in Monaco Pd, 3.45pm, which caused “significant damage”. Dromana CFA crews put out the fire and the woman was taken to Frankston Hospital with smoke inhalation.

POLICE breath-tested about 14,000 drivers in the Frankston and Mornington Peninsula Shire council areas over the Melbourne Cup long weekend with 28 being found to be either drink-ordrug driving. Another 315 traffic offences were detected, but only two serious injury collisions were recorded, which police said was pleasing “considering the amount of traffic that flowed through the area”. A 46-year-old Mt Eliza woman was allegedly driving at 107 kph in a 80kph zone when Somerville Highway Patrol intercepted her on Nepean Highway, Mornington, 2am, Wednesday 8 November. She blew 0.117 per cent and lost her licence on-the-spot for 11 months and received $1110 in fines.

The woman said she had been drinking at a function all day, and thought she might be over the limit but drove anyway as she “needed to get home”. Her weekend could have been a lot worse if she had been involved in a collision and killed or seriously injured herself or someone else, police said.

AN electrical fire which started in power lines caused $30,000 damage to an elevated holiday house at Rye, 8pm, Monday 6 November. A neighbour said she smelled smoke in Michael St and saw sparks coming from wires leading to the house. It spread to the eaves and inside the roof cavity. Rye CFA Lieutenant Eddie Matt said crews from Rye, Sorrento and Rosebud had the blaze under control in 15 minutes.

STOLEN property with a Japanese theme is awaiting its owner at Rosebud police station. The recovered property is believed to have come from a series of burglaries on the peninsula in July, with the Japanese-themed items possibly from Tootgarook. While most items have been returned to their owners, some has not been identified and sits on the shelves. “We believe [it] has possibly come from a burglary on a holiday home; it all has a Japanese theme even though there are several different types of items,” property officer Tony Paterson said. Anyone identifying the items is asked to call 5986 0422 during business hours. Others missing property will have to describe the items and state where it has come from to claim it.