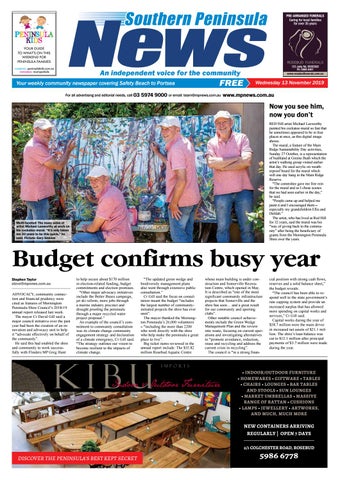 Now you see him, now you don’t RED Hill artist Michael Leeworthy painted his cockatoo mural so fast that he sometimes appeared to be in four places at once, as this digital image shows. The mural, a feature of the Main Ridge Sustainability Day activities, Sunday 27 October, is a representation of bushland at Greens Bush which the artist’s walking group visited earlier that day. He used acrylic on weatherproof board for the mural which will one day hang in the Main Ridge Reserve. “The committee gave me free rein for the mural and so I chose scenes that we had seen earlier in the day,” he said. “People came up and helped me paint it and I encouraged them – especially my grandchildren Ellis and Delilah.” The artist, who has lived at Red Hill for 32 years, said the mural was his “way of giving back to the community” after being the beneficiary of grants from the Mornington Peninsula Shire over the years.

Multi-faceted: The many sides of artist Michael Leeworthy at work on his cockatoo mural. “It’s only taken me 30 years to be this quick,” he said. Picture: Gary Sissons

Budget confirms busy year Stephen Taylor steve@mpnews.com.au ADVOCACY, community connection and financial prudency were cited as features of Mornington Peninsula Shire Council’s 2018-19 annual report released last week. The mayor Cr David Gill said a major council initiative over the past year had been the creation of an innovation and advocacy unit to help it “advocate effectively on behalf of the community”. He said this had enabled the shire and community to work successfully with Flinders MP Greg Hunt

to help secure about $170 million in election-related funding, budget commitments and election promises. “Other major advocacy initiatives include the Better Buses campaign, jet ski reform, more jobs through a marine industry precinct and drought proofing the peninsula through a major recycled water project proposal.” An example of the council’s commitment to community consultation was its climate change community engagement strategy and declaration of a climate emergency, Cr Gill said. “The strategy outlines our vision to become resilient to the impacts of climate change.

“The updated green wedge and biodiversity management plans also went through extensive public consultation.” Cr Gill said the focus on consultation meant the budget “includes the largest number of communityinitiated projects the shire has ever seen”. The mayor thanked the Mornington Peninsula’s 26,000 volunteers – “including the more than 2200 who work directly with the shire who help make the peninsula a great place to live”. Big ticket items reviewed in the annual report include: The $35.82 million Rosebud Aquatic Centre

whose main building is under construction and Somerville Recreation Centre, which opened in May. It is described as “one of the most significant community infrastructure projects that Somerville and the shire has seen… and a great result for our community and sporting clubs”. Other notable council achievements include the Green Wedge Management Plan and the review into waste, focusing on current operations and investigating alternatives to “promote avoidance, reduction, reuse and recycling and address the current crisis in recycling”. The council is “in a strong finan-

cial position with strong cash flows, reserves and a solid balance sheet,” the budget reveals. “The council has been able to respond well to the state government’s rate capping system and provide an increased surplus that has allowed more spending on capital works and services,” Cr Gill said. Capital works during the year of $58.7 million were the main driver in increased net assets of $21.1 million. The shire’s loan balance was cut to $12.1 million after principal payments of $3.7 million were made during the year.