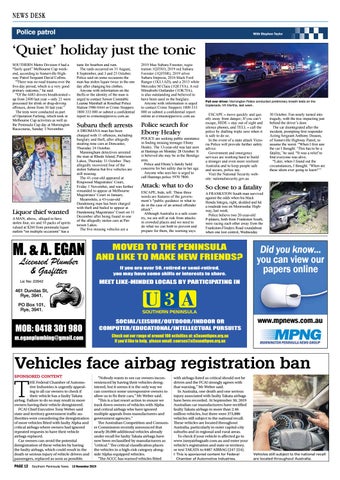 ‘Quiet’ holiday just the tonic SOUTHERN Metro Division 4 had a “fairly quiet” Melbourne Cup weekend, according to Somerville Highway Patrol Sergeant David Collins. “There was no road trauma over the five-day period, which is a very good primary outcome,” he said. “Of the 4483 drivers breath-tested – up from 2400 last year – only 21 were processed for drink or drug-driving offences, down from 30 last year.” The tests were conducted as part of Operation Furlong, which took in Melbourne Cup activities as well as the Peninsula Cup day at Mornington Racecourse, Sunday 3 November.

Liquor thief wanted A MAN, above, alleged to have stolen four, six and 10 packs of spirits valued at $260 from peninsula liquor outlets “on multiple occasions” has a

taste for bourbon and rum. The raids occurred on 31 August, 8 September, and 3 and 25 October. Police said on some occasions the man has stolen liquor twice in the one day after changing his clothes. Anyone with information on the thefts or the identity of the man is urged to contact Senior Constable Leanne Marshall at Rosebud Police Station 5986 0444 or Crime Stoppers 1800 333 000 or submit a confidential report to crimestoppersvic.com.au

A DROMANA man has been charged with 11 offences, including burglary and theft, after allegedly stealing nine cars at Doncaster, Thursday 24 October. Manningham detectives arrested the man at Rhode Island, Patterson Lakes, Thursday 31 October. They allegedly recovered four of the stolen Subarus but five vehicles are still missing. The 41-year-old appeared at Ringwood Magistrates’ Court, Friday 1 November, and was further remanded to appear at Melbourne Magistrates’ Court in January. Meanwhile, a 43-year-old Dandenong man has been charged with theft and bailed to appear at Dandenong Magistrates’ Court on 11 December after being found in one of the allegedly stolen cars at Patterson Lakes. The five missing vehicles are a

POLICE are seeking public assistance in finding missing teenager Ebony Healey. The 13-year-old was last seen at Hastings on Monday 28 October. It is believed she may be in the Bendigo area. Police and Ebony’s family hold concerns for her safety due to her age. Anyone who sees her is urged to call Hastings police 5970 7800.

ESCAPE – move quickly and quietly away from danger; If you can’t escape, HIDE – stay out of sight and silence phones, and TELL – call the police by dialling triple zero when it is safe to do so. In the event of a state attack Victoria Police will provide further safety advice. Government and emergency services are working hard to build a stronger and even more resilient Australia and to keep people safe and secure, police say. Visit the National Security website: nationalsecurity.gov.au

Attack: what to do

So close to a fatality

ESCAPE, hide, tell: These three words are features of the government’s “public guidance in what to do in the case of an armed offender attack”. Although Australia is a safe country, we are still at risk from attacks in crowded places and we need to do what we can both to prevent and prepare for them, the warning says.

30 October. Fun nearly turned into tragedy, with the tree impacting just behind the driver’s door. The car disintegrated after the incident, prompting first responder Acting Sergeant Anthony Deason, of Somerville Highway Patrol, to assume the worst. “When I first saw the car I thought: ‘This has to be a fatality,’ he said. “It was a relief to find everyone was alive. “Later, when I found out the circumstances, I thought: ‘When are these idiots ever going to learn?’”

A FRANKSTON South man survived against the odds when his black Honda Integra, right, skidded and hit a roadside tree on Moorooduc Highway, last week. Police believe two 20-year-old P-platers, both from Frankston South, were racing each other away from the Frankston-Flinders Road roundabout when one lost control, Wednesday

MOVED TO THE PENINSULA AND LIKE TO MAKE NEW FRIENDS? If you are over 50, retired or semi-retired, you may have some skills or interests to share.

MEET LIKE-MINDED LOCALS BY PARTICIPATING IN

Vehicles face airbag registration ban SPONSORED CONTENT HE Federal Chamber of Automotive Industries is urgently appealing to all car owners to check if their vehicle has a faulty Takata airbag. Failure to do so may result in more owners having their vehicle deregistered. FCAI Chief Executive Tony Weber said state and territory government traffic authorities were considering the deregistration of more vehicles fitted with faulty Alpha and critical airbags where owners had ignored repeated requests to have their vehicle airbags replaced. Car owners can avoid the potential deregistration of these vehicles by having the faulty airbags, which could result in the death or serious injury of vehicle drivers and passengers, replaced as soon as possible.

"Nobody wants to see car owners inconvenienced by having their vehicles deregistered, but it seems it is the only way we can convince some unresponsive owners to allow us to fix their cars," Mr Weber said. "This is a last resort action to ensure we track down owners of vehicles with Alpha and critical airbags who have ignored multiple appeals from manufacturers and government agencies." The Australian Competition and Consumer Commission recently announced that nearly 20,000 additional vehicles already under recall for faulty Takata airbags have now been reclassified by manufacturers as "critical." The critical classification places the vehicles in a high-risk category alongside Alpha-equipped vehicles. "The ACCC has warned vehicles fitted

with airbags listed as critical should not be driven and the FCAI strongly agrees with that warning," Mr Weber said. In Australia, one death and one serious injury associated with faulty Takata airbags have been recorded. At September 30, 2019 Australian car manufacturers have rectified faulty Takata airbags in more than 2.46 million vehicles, but there were 373,886 vehicles still subject to the national recall. These vehicles are located throughout Australia, particularly in outer capital-city suburbs and in regional and rural areas. To check if your vehicle is affected go to www.ismyairbagsafe.com.au and enter your vehicle's registration and state or territory, or text TAKATA to 0487 AIRBAG (247 224). ■ This is sponsored content for Federal Chamber of Automotive Industries.

Vehicles still subject to the national recall are located throughout Australia.