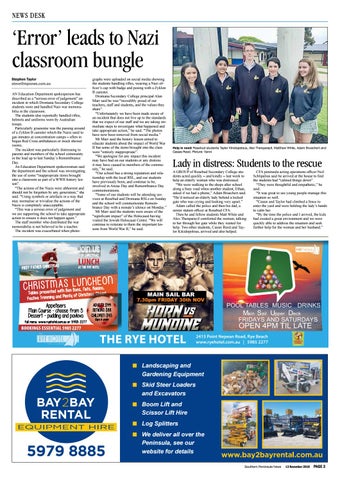 ‘Error’ leads to Nazi classroom bungle Stephen Taylor steve@mpnews.com.au AN Education Department spokesperson has described as a “serious error of judgement” an incident in which Dromana Secondary College students wore and handled Nazi war memorabilia in the classroom. The students also reportedly handled rifles, helmets and uniforms worn by Australian troops. Particularly gruesome was the passing around of a Zyklon B canister which the Nazis used to gas inmates at concentration camps – often in bogus Red Cross ambulances or mock shower rooms. The incident was particularly distressing to parents and members of the school community in the lead up to last Sunday’s Remembrance Day. An Education Department spokeswoman said the department and the school was investigating the use of some “inappropriate items brought into a classroom as part of a WWII history lesson”. “The actions of the Nazis were abhorrent and should not be forgotten by any generation,” she said. “Using symbols or artefacts in a way that may normalise or trivialise the actions of the Nazis is completely unacceptable. “This was a serious error of judgement and we are supporting the school to take appropriate action to ensure it does not happen again.” The staff member who distributed the war memorabilia is not believed to be a teacher. The incident was exacerbated when photo-

graphs were uploaded on social media showing the students handling rifles, wearing a Nazi officer’s cap with badge and posing with a Zyklon B canister. Dromana Secondary College principal Alan Marr said he was “incredibly proud of our teachers, staff and students, and the values they share”. “Unfortunately we have been made aware of an incident that does not live up to the standards that we expect of our staff and we are taking immediate steps to investigate what happened and take appropriate action,” he said. “The photos have now been removed from social media.” Mr Marr said the history lesson aimed to educate students about the impact of World War II but some of the items brought into the class were “entirely inappropriate”. “We apologise for any impact this incident may have had on our students or any distress it may have caused to members of the community,” he said. “Our school has a strong reputation and relationship with the local RSL, and our students have previously been, and continue to be, involved in Anzac Day and Remembrance Day commemorations. “Some of our students will be attending services at Rosebud and Dromana RSLs on Sunday and the school will commemorate Remembrance Day with a minute’s silence on Monday.” Mr Marr said the students were aware of the “significant impact” of the Holocaust having visited the Jewish Holocaust Centre. “We will continue to reiterate to them the important lessons from World War II,” he said.

Lady in distress: Students to the rescue

A GROUP of Rosebud Secondary College students acted quickly – and kindly – last week to help an elderly woman who was distressed. “We were walking to the shops after school along a busy road when another student, Ethan, asked if we had a phone,” Adam Bruechert said. “He’d noticed an elderly lady behind a locked gate who was crying and looking very upset.” Adam called the police and then his dad, a senior station officer at Rosebud CFA. Then he and fellow students Matt White and Alex Thenparayil comforted the woman, talking to her through her gate while they waited for help. Two other students, Cassie Reed and Taylor Kikidopolous, arrived and also helped.

CFA peninsula acting operations officer Neil Schlipalius said he arrived at the house to find the students had “calmed things down”. “They were thoughtful and empathetic,” he said. “It was great to see young people manage this situation so well. “Cassie and Taylor had climbed a fence to enter the yard and were holding the lady’s hands to calm her. “By the time the police and I arrived, the kids had created a great environment and we were quickly able to address the situation and seek further help for the woman and her husband.”