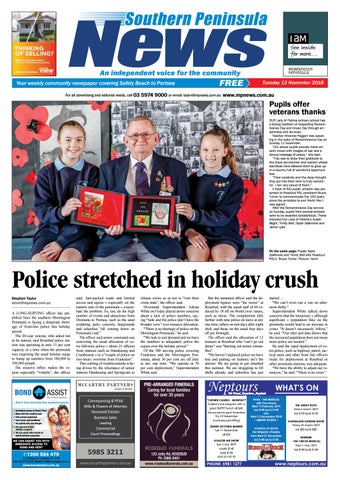 Southern Peninsula Speak to your agent about listing on realestateview.com.au.

Pupils offer veterans thanks OUR Lady of Fatima primary school has a strong tradition of respecting Remembrance Day and Anzac Day through art activities and services. Teacher Amanda Heggen was speaking in the wake of Remembrance Day on Sunday 11 November. “Our senior pupils proudly made art work mixed with images of war and a strong message of peace,” she said. “This was to show their gratitude to the brave servicemen and women whose sacrifices have allowed them to grow up in a country full of wonderful opportunities. “Their creativity and the deep thought they put into their work is truly wonderful. I am very proud of them.” A book of the pupils’ artwork was presented to Rosebud RSL president Bruce Turner to commemorate the 100 years since the armistice to end World War I was signed. After the Remembrance Day service on Sunday, pupils from several schools were to be awarded scholarships. These included Our Lady of Fatima’s Austin Blight, Trinity Bell, Taylor Gallimore and Jamie Lyall.

Police stretched in holiday crush Stephen Taylor steve@mpnews.com.au A LONG-SERVING officer has amplified fears the southern Mornington Peninsula is facing a desperate shortage of front-line police this holiday period. The 20-year veteran, who asked not to be named, said Rosebud police station was operating at only 31 per cent capacity at a time when the peninsula was expecting the usual holiday surge to bump up numbers from 180,000 to 500,000 people. The massive influx makes the region especially “volatile”, the officer

said. Jam-packed roads and limited access and egress – especially on the eastern side of the peninsula – exacerbate the problem. So, too, do the high number of events and attractions from Dromana to Portsea, such as the sand sculpting, polo, concerts, fairgrounds and schoolies “all coming down on Peninsula Link”. The officer said senior command was restricting the usual allocation of extra full-time police – about 25 officers from stations such as Dandenong and Cranbourne – to a “couple of police on two hours’ overtime from Frankston”. This curbing of reinforcements is being driven by the reluctance of senior stations Dandenong and Springvale to

But the unnamed officer said the deployment figures were “far worse” at Rosebud, with the usual staff of 60 reduced by 18 off on WorkCover issues, such as stress. The complement falls further with nine police on leave at any one time, others on rest days after night shift, and those on the usual four days off per fortnight. The officer said the allocation of 12 trainees at Rosebud who “can’t go out alone” was “burning out senior constables”. “We haven’t replaced police we have lost and putting on trainees isn’t the answer. We are going to get smashed this summer. We are struggling to fill shifts already and schoolies has just

*CROWN CASINO - MONTHLY* Casino’s bus program with a great BUFFET lunch all $40. Only p/p over the age of 18 permitted.

started … “We can’t even run a van on afternoon shifts.” Superintendent White talked down concerns that the temporary – although significant – population hike on the peninsula would lead to an increase in crime. “It doesn’t necessarily follow,” he said. “Our intel and data shows that the increased population does not mean more police are needed.” He said the rapid deployment of extra police, such as highway patrol, tactical units and other front line officers ready for deployment at Rosebud or other peninsula stations, was adequate. “We have the ability to adjust our resources,” he said. “There is no crisis.”

release crews so as not to “ruin their crime stats”, the officer said. Divisional Superintendent Adrian White on Friday played down concerns about a lack of police numbers, saying “rank and file police don’t have the broader view” over resource allocation. “There is no shortage of police on the Mornington Peninsula,” he said. “We task to suit demand and we have the numbers to adequately police the region over the holiday period.” Of the 580 serving police covering Frankston and the Mornington Peninsula, about 30 per cent are off duty at any one time. “We operate at 70 per cent deployment,” Superintendent White said.