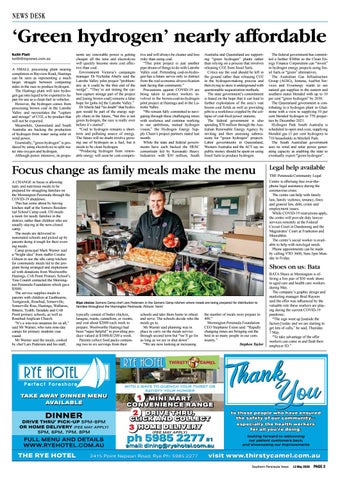 ‘Green hydrogen’ nearly affordable Keith Platt keith@mpnews.com.au A SMALL processing plant nearing completion in Bayview Road, Hastings can be seen as representing a much larger struggle between competing sides in the race to produce hydrogen. The Hastings plant will turn hydrogen gas into liquid to be exported to Japan for use as a clean fuel in vehicles. However, the hydrogen comes from processing brown coal in the Latrobe Valley and necessitates the “capture and storage” of CO2, a by-product that will not be exported. Meanwhile, Queensland and South Australia are backing the production of hydrogen from water using solar or wind power. Essentially, “green hydrogen” is produced by using electrolysis to split water into oxygen and hydrogen. Although power intensive, its propo-

nents say renewable power is getting cheaper all the time and electrolysis will quickly become more cost effective than coal. Environment Victoria’s campaigns manager Dr Nicholas Aberle said the Latrobe Valley pilot project “problematic as it could be the thin end of the wedge”. “They’re not testing the carbon capture storage part of the project and [using brown coal] remains a false hope for [jobs in] the Latrobe Valley.” Dr Aberle had “no doubt” that hydrogen would be part of the energy supply chain in the future, “but this is not green hydrogen, the race is really over before it’s started”. “Coal to hydrogen remains a shortterm and polluting source of energy. The future will no doubt involve growing use of hydrogen as a fuel, but it needs to be clean hydrogen. “Producing hydrogen from renewable energy will soon be cost-competi-

tive and will always be cleaner and less risky than using coal. “This pilot project is just another pipe dream of things to do with Latrobe Valley coal. Pretending coal-to-hydrogen has a future serves only to distract from the real economic diversi-fication task facing that community.” Precautions against COVID-19 are being taken to protect workers involved in the brown-coal-to-hydrogen pilot project at Hastings and in the Latrobe Valley. “We remain fully committed to navigating through these challenging times with resilience and continue working to our ambitious, mutual hydrogen vision,” the Hydrogen Energy Supply Chain’s project partners stated last month. While the state and federal governments have each backed the HESC consortium led by Kawasaki Heavy Industries with $50 million, South

Australia and Queensland are supporting “green hydrogen” plants rather than relying on a process that involves releasing CO2 from fossil fuels. Critics say the coal should be left in the ground rather than releasing CO2 in the hydrogen-making process and then trying to store it underground with questionable sequestration methods. The state government’s commitment is based on the hope that it can lead to further exploitation of the area’s vast brown coal fields as well as providing jobs to a workforce crippled by the collapse of coal-fired power stations. The federal government is also spending $70 million through the Australian Renewable Energy Agency by inviting and then assessing submissions for “green hydrogen” projects. Labor governments in Queensland, Western Australia and the ACT say no public money should be spent on using fossil fuels to produce hydrogen.

The federal government has committed a further $300m so the Clean Energy Finance Corporation can “invest” in hydrogen energy projects using fossil fuels or “green” alternatives. The Australian Gas Infrastructure Group (AGIG), Jemena, AusNet Services and Evoenergy wants to see natural gas supplies in the eastern and southern states blended with up to 10 per cent “green hydrogen” by 2030. The Queensland government is contributing to a hydrogen plant in Gladstone with a view to supplying 10 per cent blended hydrogen to 770 properties by December 2021. Hydrogen Park South Australia is scheduled to open mid-year, supplying blended gas (5 per cent hydrogen) to 710 households in Mitchell Park. The South Australian government sees its wind and solar power generating capacity as enabling the state to eventually export “green hydrogen”.

A CHANGE in focus is allowing tasty and nutritious meals to be prepared for struggling families on the Mornington Peninsula through the COVID-19 shutdown. This has come about by having kitchen staff at the Somers Residential School Camp cook 350 meals a week for needy families in the district, rather than children who are usually staying at the now-closed camp. The meals are delivered to nominated schools and picked up by parents doing it tough for their evening meals. Camp principal Mark Warner said a “bright idea” from staffer Coralie Gibson to use the idle camp kitchen for community meals led to the program being arranged and implemented with donations from Woolworths Hastings. Crib Point Primary School’s Tina Coumb contacted the Mornington Peninsula Foundation which gave $5000. The service supplies meals to parents with children at Eastbourne, Tootgarook, Rosebud, Somerville, Somerville Rise, Hastings, Wallaroo, Bittern, Tyabb, Taradale and Crib Point primary schools, as well as Rosebud Anglican Church. “It’s a win-win situation for us all,” said Mr Warner, who runs nine-day camps for primary students year round. Mr Warner said the meals, cooked by chef Lars Pedersen and his staff,

Centre is offeriung free over-thephone legal assistance during the coronavirus crisis. The centre can help with family law, family violence, tenancy, fines and general law, debt, crime and employment issues. While COVID-19 restrictions apply, the centre will provide duty lawyer services remotely at the Federal Circuit Court in Dandenong and the Magistrates’ Court at Frankston and Moorabbin. The centre’s social worker is available to help with non-legal needs. Phone appointments can be made by calling 9783 3600, 9am-5pm Monday to Friday.

Shoes on us: Bata

Ripe choice: Somers Camp chef Lars Pedersen in the Somers Camp kitchen where meals are being prepared for distribution to families throughout the Mornington Peninsula. Picture: Yanni

typically consist of butter chicken, lasagne, roasts, cannelloni, or risotto, and cost about $2000 each week to prepare. Woolworths Hastings had been “super helpful” in providing produce valued at $1000-$1200 a week. Parents collect food packs containing two to six servings from their

schools and take them home to reheat and serve. The schools decide who the meals go to. Mr Warner said planning was in place to carry on the meals service through second term but “we’ll go for as long as we are in shut down”. “We are now looking at increasing

the number of meals were prepare to 400.” Mornington Peninsula Foundation CEO Stephanie Exton said: “Rapidly changing times are bringing out the best in so many people in our community.” Stephen Taylor

WITH 3 WAYS TO QUENCH YOUR THIRST OR SATISFY YOUR HUNGER

BATA Shoes in Mornington is offering a free pair of $50 work shoes to aged care and health care workers during May. The company’s graphic design and marketing manager Brad Rayson said the offer was influenced by the valuable role these workers are playing during the current COVID-19 pandemic. “The sign went up [outside the factory] today and we are starting to get lots of calls,” he said, Thursday 7 May. “To take advantage of the offer workers can come in and flash their employer ID.”

to those people who have ensured the safety of our community... especially the health workers for all you’re doing. looking forward to welcoming our patient customers back, and showcasing our improvements