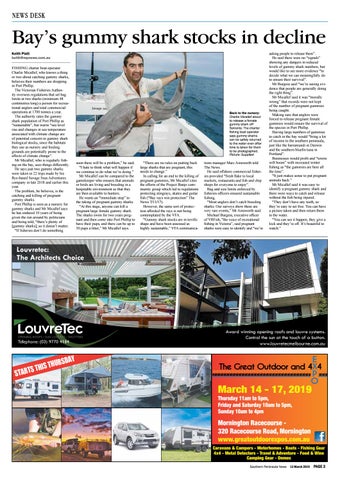 Bay’s gummy shark stocks in decline Keith Platt keith@mpnews.com.au FISHING charter boat operator Charlie Micallef, who knows a thing or two about catching gummy sharks, believes their numbers are dropping in Port Phillip. The Victorian Fisheries Authority oversees regulations that set bag limits at two sharks (minimum 48 centimetres long) a person for recreational anglers and total commercial operations at 1700 tonnes a year. The authority rates the gummy shark population of Port Phillip as “sustainable”, but warns “sea level rise and changes in sea temperature associated with climate change are of potential concern to gummy shark biological stocks, since the habitats they use as nursery and feeding grounds are potentially prone to the effects of climate change”. Mr Micallef, who is regularly fishing on the bay, sees things differently. He says just two gummy sharks were taken in 22 trips made by his Rye-based Savage Seas Adventures company in late 2018 and earlier this year. The problem, he believes, is the catching and killing of pregnant gummy sharks. Port Phillip is seen as a nursery for gummy sharks and Mr Micallef says he has endured 10 years of being given the run around by politicians and being told, “there’s plenty of [gummy sharks], so it doesn’t matter. “If fisheries don’t do something

Back to the nursery: Charlie Micallef about to release a female gummy shark off Sorrento. The charter fishing boat operator says gummy sharks can be safely returned to the water even after time is taken for them to be photographed. Picture: Supplied

soon there will be a problem,” he said. “I hate to think what will happen if we continue to do what we’re doing.” Mr Micallef can be compared to the gamekeeper who ensures that animals or birds are living and breeding in a hospitable environment so that they are then available to hunters. He wants an “immediate stop” to the taking of pregnant gummy sharks. “At this stage, anyone can kill a pregnant large female gummy shark. The sharks swim for two years pregnant and then come into Port Phillip to have their pups, and there can be up to 50 pups a litter,” Mr Micallef says.

“There are no rules on putting back large sharks that are pregnant, this needs to change.” In calling for an end to the killing of pregnant gummies, Mr Micallef cites the efforts of the Project Banjo community group which led to regulations protecting stingrays, skates and guitar fish (“Bay rays win protection” The News 7/11/17). However, the same sort of protection afforded the rays is not being contemplated by the VFA. “Gummy shark stocks are in terrific shape and have been assessed as highly sustainable,” VFA communica-

asking people to release them”. He said there were no “signals” showing any dangers in reduced levels of gummy shark numbers, but would like to see more evidence “to decide what we can meaningfully do to ensure their survival”. Mr Burgess said “we’re seeing evidence that people are generally doing the right thing”. Mr Micallef said it was “morally wrong” that records were not kept of the number of pregnant gummies being caught. Making sure that anglers were forced to release pregnant female gummies would ensure the survival of the species in Port Phillip. Having large numbers of gummies to catch in the bay would “bring a lot of income to the southern peninsula, just like the barramundi in Darwin and the southern bluefin tuna in Portland”. Businesses would profit and “towns will boom” with increased winter fishing as “the gummies are here all the time”. “It just makes sense to put pregnant animals back.” Mr Micallef said it was easy to identify a pregnant gummy shark and there were ways to catch and release without the fish being injured. “They don’t have any teeth, so they’re easy to set free. You can have a picture taken and then return them to the water. “You can see it happen, they give a kick and they’re off. It’s beautiful to watch.”

Award winning opening roofs and louvre systems. Control the sun at the touch of a button. www.louvretecmelbourne.com.au