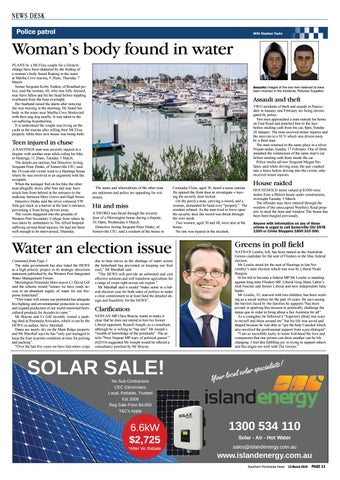 Woman’s body found in water PLANS by a Mt Eliza couple for a lifestyle change have been shattered by the finding of a woman’s body found floating in the water at Martha Cove marina, 9.30am, Thursday 7 March. Senior Sergeant Kirby Tonkin, of Rosebud police, said the woman, 60, who was fully dressed, may have fallen and hit her head before toppling overboard from the boat overnight. Her husband raised the alarm after noticing she was missing in the morning. He found her body in the water near Martha Cove Boulevard with their pug dog nearby. It was taken to the vet suffering hypothermia. It is understood the couple was living on the yacht at the marina after selling their Mt Eliza property while their new house was being built.

Assaults: Images of the two men believed to have been involved in the incidents. Pictures: Supplied.

Assault and theft TWO incidents of theft and assault in Pearcedale in January and February are being investigated by police. Two men approached a man outside his home on East Road and punched him to the face before stealing cash from his car, 8pm, Sunday 20 January. The man received minor injuries and the men ran to a SUV which was driven away by a third man. The men returned to the same place in a silver Nissan sedan, Sunday 17 February. One of them smashed the windscreen of the same man’s car before stealing cash from inside the car. Police media advisor Sergeant Megan Stefanec said while driving away the pair crashed into a fence before driving into the victim, who received minor injuries.

Teen injured in chase A HASTINGS man was severely injured in a dispute with another man while riding his bike in Hastings, 11.20am, Tuesday 5 March. The details are unclear, but Detective Acting Sergeant Peter Drake, of Somerville CIU, said the 19-year-old victim went to a Hastings house where he was involved in an argument with the occupant. When the teenager fled on his bike the other man allegedly drove after him and may have struck him from behind at the entrance to the walkway between Mary Grove and High Street. Detective Drake said the silver coloured VW Jetta got stuck in a barrier at the lane’s entrance, preventing it from being driven away. The victim staggered into the grounds of Western Port Secondary College from where he was taken by ambulance to The Alfred hospital suffering serious head injuries. He had not been well enough to be interviewed, Thursday.

The name and whereabouts of the other man are unknown and police are appealing for witnesses.

Hit and miss A SWORD was thrust through the security door of a Mornington house during a dispute, 10.10pm, Wednesday 6 March. Detective Acting Sergeant Peter Drake, of Somerville CIU, said a resident of the house in

Coimadai Close, aged 30, heard a noise outside. He opened the front door to investigate – leaving the security door locked. On the porch a man, carrying a sword, and a woman, demanded he hand over “property”. The resident refused. As the man tried to force open the security door the sword was thrust through the wire mesh. Two women, aged 30 and 48, were also at the house. No one was injured in the incident.

Water an election issue Continued from Page 1 The state government has also listed the HEWS as a high priority project in its strategic directions statement published by the Western Port Integrated Water Management Forum. Mornington Peninsula Shire mayor Cr David Gill said the scheme would “ensure we have ready access to an abundant supply of water for our fireprone hinterland”. “This water will ensure our peninsula has adequate fire-fighting and environmental protection to secure and expand production of our world renowned horticultural products for decades to come.” Mr Brayne and Cr Gill recently visited a packing shed at Peninsula Avocados, which is run by the HEWS co-author, Steve Marshall. Dams are nearly dry on the Main Ridge property and Mr Marshall says he has “only just managed to keep the fruit in prime condition in time for picking and packing”. “Over the last few years we have lost entire crops

NEPEAN MP Chris Brayne wants to make it clear that he does not intend to hire his former Liberal opponent, Russell Joseph, as a consultant, although he is willing to “tap into” Mr Joseph’s “wealth of knowledge of the peninsula”. The article “New Nepean MP wary of political games’” (6/2/19) suggested Mr Joseph would be offered a consultancy position by Mr Brayne.

NATHAN Lesslie, left, has been named as the Australian Greens candidate for the seat of Flinders in the May federal election. Mr Lesslie stood for the seat of Hastings in last November’s state election which was won by Liberal Neale Burgess. In his bid to become a federal MP Mr Lesslie is standing against long time Flinders MP, Liberal Greg Hunt, Labor’s Josh Sinclair and former Liberal and now independent Julia banks. Mr Lesslie, 32, married with two children, has been working as a social worker for the past 10 years. He says seeing the barriers faced by the families he supports “has been pivotal in sparking this mission to politically challenge the status quo in order to bring about a fair Australia for all”. As a youngster, he followed a “trajectory [that] was scary to myself and those around me” but his life was saved and shaped because he was able to “get the help I needed which also involved the professional support from a psychologist”. “I am so incredibly lucky to know first-hand the love and compassion that one person can show another can be life changing. I feel this fulfilling joy in trying to support others and this aligns me well with The Greens.”

HOUSEHOLD items valued at $1000 were stolen from a Bittern house under construction, overnight Tuesday 5 March. The offender may have entered through the window of the unoccupied Woolleys Road property to steal the door and window. The house has been been burgled previously.

due to heat waves as the shortage of water across the hinterland has prevented us keeping our fruit cool,” Mr Marshall said. “The HEWS will provide an unlimited and cost effective solution and will transform agriculture for a range of crops right across our region.” Mr Marshall said it would “make sense in a federal election year for both sides of politics to make a clear commitment to at least fund the detailed design and feasibility for the HEWS”.