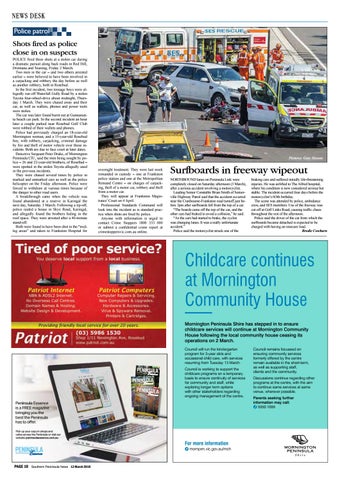 Shots fired as police close in on suspects POLICE fired three shots at a stolen car during a dramatic pursuit along back roads in Red Hill, Dromana and Teurong, Friday 2 March. Two men in the car – and two others arrested earlier – were believed to have been involved in a carjacking and robbery the day before as well as another robbery, both in Rosebud. In the first incident, two teenage boys were allegedly run off Waterfall Gully Road by a stolen Toyota four-wheel-drive about midnight, Thursday 1 March. They were chased away and their car, as well as wallets, phones and power tools were stolen. The car was later found burnt out at Gunnamatta beach car park. In the second incident an hour later a couple parked near Rosebud Golf Club were robbed of their wallets and phones. Police had previously charged an 18-year-old Mornington woman, and a 15-year-old Rosebud boy, with robbery, carjacking, criminal damage by fire and theft of motor vehicle over those incidents. Both are due to face court at later dates. Detective Sergeant Peter Drake, of Mornington Peninsula CIU, said the men being sought by police – 26 and 22-year-old brothers, of Rosebud – were spotted in the stolen Toyota allegedly used in the previous incidents. They were chased several times by police in marked and unmarked cars as well as the police helicopter on the Friday afternoon. Police were forced to withdraw at various times because of the danger to other road users. A breakthrough came when the vehicle was found abandoned at a reserve in Karingal the next day, Saturday 3 March. Following a tip-off, police raided a house in Skye Road, Karingal, and allegedly found the brothers hiding in the roof space. They were arrested after a 40-minute stand-off. Both were found to have been shot in the “midleg areas” and taken to Frankston Hospital for

Pictures: Gary Sissons overnight treatment. They were last week remanded in custody – one at Frankston police station and one at the Metropolitan Remand Centre – on charges of carjacking, theft of a motor car, robbery and theft from a motor car. They will appear at Frankston Magistrates’ Court on 4 April. Professional Standards Command will look into the incident as is standard practice when shots are fired by police. Anyone with information is urged to contact Crime Stoppers 1800 333 000 or submit a confidential crime report at crimestoppersvic.com.au online.

Surfboards in freeway wipeout NORTHBOUND lanes on Peninsula Link were completely closed on Saturday afternoon (3 March), after a serious accident involving a motorcyclist. Leading Senior Constable Brian Smith of Somerville Highway Patrol said that the accident occurred near the Cranbourne-Frankston road turnoff just before 3pm after surfboards fell from the top of a car. “The boards came off the top of the car, and the other cars had braked to avoid a collision,” he said. “As the cars had started to brake, the cyclist was changing lanes. It was a really unfortunate accident.” Police said the motorcyclist struck one of the

braking cars and suffered initially life-threatening injuries. He was airlifted to The Alfred hospital, where his condition is now considered serious but stable. The incident occurred four days before the motorcyclist’s 6Oth birthday. The scene was attended by police, ambulance crew, and SES members. Use of the freeway was cut off at Golf Links Road, causing traffic chaos throughout the rest of the afternoon. Police said the driver of the car from which the surfboards became detached is expected to be charged with having an insecure load. Brodie Cowburn

Council is working to support the childcare programs on a temporary basis to ensure continuity of services for community and staff, while exploring longer term options with other stakeholders regarding ongoing management of the centre.

Council remains focussed on ensuring community services formerly offered by the centre remain available in the short-term, as well as supporting staff, clients and the community. Discussions continue regarding other programs at the centre, with the aim to continue same services at same venue, wherever possible. Parents seeking further information may call: 5950 1099