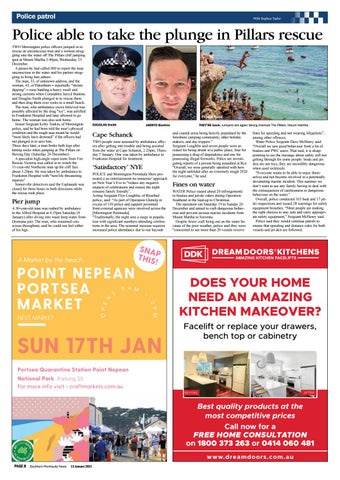 Police able to take the plunge in Pillars rescue TWO Mornington police officers jumped in to rescue an unconscious man and a woman struggling into the water off The Pillars cliff jumping spot at Mount Martha 3.40pm, Wednesday 23 December. A passer-by had called 000 to report the man unconscious in the water and his partner struggling to bring him ashore. The man, 33, of unknown address, and the woman, 43, of Pakenham – reportedly “skinny dipping” – were battling a heavy swell and strong currents when Constables Jarryd Buntine and Douglas Smith plunged in to rescue them and then drag them over rocks to a small beach. The man, who ambulance crews believed was possibly affected by the drug “ice”, was airlifted to Frankston Hospital and later allowed to go home. The woman was also sent home. Senior Sergeant Kirby Tonkin, of Mornington police, said he had been told the man’s physical condition and the rough seas meant he would “most likely have drowned” if the officers had not plunged in to save him. Three days later, a man broke both legs after hitting rocks when jumping at The Pillars on Boxing Day (Saturday 26 December). A specialist high-angle ropes team from Fire Rescue Victoria was called in to winch the 31-year-old Northcote man up the cliff face about 5.20pm. He was taken by ambulance to Frankston Hospital with “non-life threatening injuries”. Somerville detectives said the Esplanade was closed for three hours in both directions while the rescue took place.

Pier jump A 30-year-old man was rushed by ambulance to the Alfred Hospital at 4.35pm Saturday (9 January) after diving into waist deep water from Dromana pier. The man, who remained conscious throughout, said he could not feel either of his legs.

Cape Schanck TWO people were assessed by ambulance officers after getting into trouble and being assisted from the water at Cape Schanck, 2.20pm, Thursday 7 January. One was taken by ambulance to Frankston Hospital for treatment.

‘Satisfactory’ NYE POLICE and Mornington Peninsula Shire promoted a no entertainment-no nonsense’ approach on New Year’s Eve to “reduce any negative impacts of celebrations and ensure the night remains family friendly”. Acting Sergeant Flyn Loughlin, of Rosebud police, said: “As part of Operation Glenelg in excess of 150 police and support personnel from external agencies were involved across the [Mornington Peninsula]. “Traditionally, the night sees a surge in population with significant numbers attending celebrations in the area. The seasonal increase requires increased police attendance due to our bayside

and coastal areas being heavily populated by the foreshore camping community, other holiday makers, and day trippers.” Sergeant Loughlin said seven people were arrested for being drunk in a public place; four for possessing a drug of dependence and one for possessing illegal fireworks. Police are investigating reports of a person being assaulted at Rye. “Overall, we were generally satisfied with how the night unfolded after an extremely tough 2020 for everyone,” he said.

Fines on water WATER Police issued about 20 infringements to boaties and jet-ski riders during Operation Southend in the lead-up to Christmas. The operation ran Saturday 19 to Sunday 20 December and aimed to curb dangerous behaviour and prevent serious marine incidents from Mount Martha to Sorrento. Despite fewer craft being out on the water because of the poor weather, police said they were “concerned to see more than 20 vessels receive

fines for speeding and not wearing lifejackets”, among other offences. Water Police Sergeant Dave McHenry said: “Overall we saw good behaviour from a lot of boaties and PWC users. That said, it is disappointing to see the message about safety still not getting through for some people: boats and jetskis are not toys, they are incredibly dangerous when used recklessly. “Everyone wants to be able to enjoy themselves and not become involved in a potentially devastating marine incident. This summer we don’t want to see any family having to deal with the consequences of carelessness or dangerous behaviour on the water.” Overall, police conducted 165 boat and 17 jetski inspections and issued 28 warnings for safety equipment breaches. “Most people are making the right choices to stay safe and carry appropriate safety equipment,” Sergeant McHenry said. Police said they would continue patrols to ensure that speeding and distance rules for both vessels and jet-skis are followed.

DOES YOUR HOME NEED AN AMAZING KITCHEN MAKEOVER? Facelift or replace your drawers, bench top or cabinetry