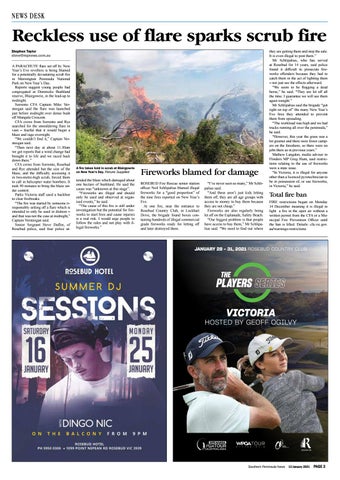 Reckless use of flare sparks scrub fire Stephen Taylor steve@mpnews.com.au A PARACHUTE flare set off by New Year’s Eve revellers is being blamed for a potentially devastating scrub fire in Mornington Peninsula National Park on New Year’s Day. Reports suggest young people had congregated at Dimmicks Bushland reserve, Blairgowrie, in the lead-up to midnight. Sorrento CFA Captain Mike Versteegan said the flare was launched just before midnight over dense bush off Mungala Crescent. CFA crews from Sorrento and Rye searched for the smouldering flare in vain – fearful that it would begin a blaze and rage overnight. “We couldn’t find it,” Captain Versteegan said. “Then next day at about 11.30am we got reports that a wind change had brought it to life and we raced back down there.” CFA crews from Sorrento, Rosebud and Rye attended but the size of the blaze, and the difficulty accessing it in two-metre-high scrub, forced them to call in helicopter water bombers. It took 90 minutes to bring the blaze under control. Parks Victoria staff used a backhoe to clear firebreaks. “The fire was started by someone irresponsibly setting off a flare which is intended to only be used in distress – and that was not the case at midnight,” Captain Versteegan said. Senior Sergeant Steve Duffee, of Rosebud police, said four police at-

tended the blaze which damaged about one hectare of bushland. He said the cause was “unknown at this stage”. “Fireworks are illegal and should only be used and observed at organised events,” he said. “The cause of this fire is still under investigation but the potential for fireworks to start fires and cause injuries is a real risk. I would urge people to follow the rules and not play with illegal fireworks.”

Fireworks blamed for damage ROSEBUD Fire Rescue senior station officer Neil Schlipalius blamed illegal fireworks for a “good proportion” of the nine fires reported on New Year’s Eve. At one fire, near the entrance to Rosebud Country Club, in Lockhart Drive, the brigade found boxes containing hundreds of illegal commercial grade fireworks ready for letting off and later destroyed them.

they are getting them and stop the sale. It is even illegal to post them.” Mr Schlipalius, who has served at Rosebud for 14 years, said police found it difficult to prosecute fireworks offenders because they had to catch them in the act of lighting them – not just see the effects afterward. “We seem to be flogging a dead horse,” he said. “They are let off all the time. I guarantee we will see them again tonight.” Mr Schlipalius said the brigade “got right on top of” the many New Year’s Eve fires they attended to prevent them from spreading. “The workload was high and we had trucks running all over the peninsula,” he said. “However, this year the grass was a lot greener and there were fewer campers on the foreshore; so there were no jobs there as in previous years.” Mathew Langdon, media adviser to Flinders MP Greg Hunt, said restrictions relating to the use of fireworks were a state issue. “In Victoria, it is illegal for anyone other than a licenced pyrotechnician to be in possession of, or use fireworks, in Victoria,” he said.

Total fire ban FIRE restrictions began on Monday 14 December meaning it is illegal to light a fire in the open air without a written permit from the CFA or a Municipal Fire Prevention Officer until the ban is lifted. Details: cfa.vic.gov. au/warnings-restrictions