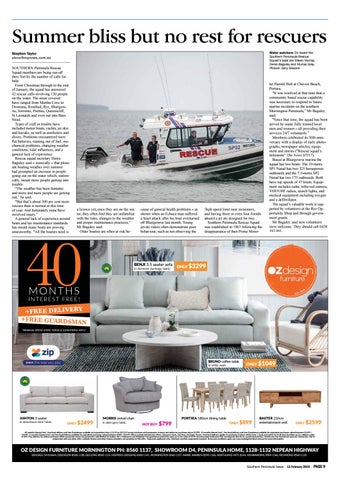 Stephen Taylor steve@mpnews.com.au SOUTHERN Peninsula Rescue Squad members are being run off their feet by the number of calls for help. From Christmas through to the end of January, the squad has answered 42 rescue calls involving 150 people on the water. The areas covered have ranged from Martha Cove to Dromana, Rosebud, Rye, Blairgowrie, Sorrento, Portsea, Queenscliff, St Leonards and even out into Bass Strait. Types of craft in trouble have included motor boats, yachts, jet skis and kayaks, as well as snorkelers and divers. Problems encountered were flat batteries, running out of fuel, mechanical problems, changing weather conditions, tidal influences, and a general lack of experience. Rescue squad secretary Denis Baguley said – ironically – that pleasant boating weather over summer had prompted an increase in people going out on the water which, statistically, meant more people getting into trouble. “The weather has been fantastic and more and more people are getting out,” he said. “But that’s about 300 per cent more rescues than is normal at this time of year. And fortunately none have involved injury.” A general lack of experience around boats and lax maintenance standards has meant many boats are proving unseaworthy. “All the boaties need is

a licence yet, once they are on the water, they often find they are unfamiliar with the tides, changes to the weather and proper maintenance practices,” Mr Baguley said. Older boaties are often at risk be-

cause of general health problems – as shown when an Echuca man suffered a heart attack after his boat overturned off Blairgowrie last month. Young jet-ski riders often demonstrate poor behaviour, such as not observing the

5kph speed limit near swimmers, and having three or even four friends aboard a jet ski designed for two. Southern Peninsula Rescue Squad was established in 1967 following the disappearance of then Prime Minis-

ter Harold Holt at Cheviot Beach, Portsea. “It was resolved at that time that a community based rescue capability was necessary to respond to future marine incidents on the southern Mornington Peninsula,” Mr Baguley said. “Since that time, the squad has been served by many fully trained local men and women – all providing their services 24/7 voluntarily.” Members celebrated its 50th anniversary with a display of early photographs, newspaper articles, equipment and stories (“Rescue squad’s milestone” The News 3/7/17). Based at Blairgowrie marina the squad has two boats: The 10-metre SP1 Naiad has two 325 horsepower outboards and the 7.5-metre SP2 Naiad has two 175 outboards. Both have top speeds of 47 knots. Equipment includes radar, infra-red camera, VHF/UHF radios, search lights, and medical equipment including oxygen and a defibrillator. The squad’s valuable work is supported by volunteers at the Rye Opportunity Shop and through government grants. Mr Baguley said new volunteers were welcome. They should call 0458 143 041.

40 months interest free*, free local delivery and free Guardsman available on transactions from 1/2/19 to 25/2/19 across furniture and homewares, in-store and online for purchases above $1999. 24 months interest free*, free local delivery and free Guardsman available for equivalent purchases valued between $1499 $1999. 12 months interest free* and free local delivery available for equivalent purchases valued between $999 - $1499. Offers exclude Introductory offers, Clearance stock, Hot Buys and Super Savers. Free local delivery applies to purchases in-store within Zone 1, local, and metro for of all store locations up to a delivery value of $99. Free delivery for online purchases within associated metro city parameters only (limited to Sydney, ACT, Melbourne and Brisbane). Free guardsman protection pack up to the value of $249 recommended retail price that corresponds directly to a purchased product. Strictly one free Guardsman pack per transaction. Not in conjunction with any other offer. Latitude finance and other finance providers not accepted on this offer. *Approved applicants only. Minimum monthly repayments required. Terms and conditions apply see www.ozdesignfurniture.com.au for more information.