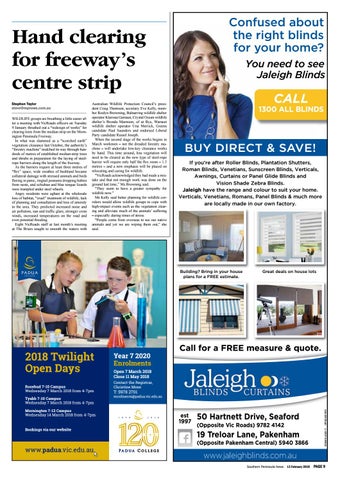 WILDLIFE groups are breathing a little easier after a meeting with VicRoads officers on Tuesday 9 January thrashed out a “redesign of works” for clearing trees from the median strip on the Mornington Peninsula Freeway. In what was slammed as a “scorched earth” vegetation clearance last October, the authority’s “forestry machine” mulched its way through hundreds of metres of established median-strip trees and shrubs in preparation for the laying of steelrope barriers along the length of the freeway. As the barriers require at least three metres of “flex” space, wide swathes of bushland became collateral damage with stressed animals and birds fleeing in panic, ringtail possums dropping babies from nests, and echidnas and blue tongue lizards were trampled under steel wheels. Angry residents were aghast at the wholesale loss of habitat, “cruel” treatment of wildlife, lack of planning and consultation and loss of amenity to the area. They predicted increased noise and air pollution, sun and traffic glare, stronger cross winds, increased temperatures on the road and even potential flooding. Eight VicRoads staff at last month’s meeting at The Briars sought to smooth the waters with

Australian Wildlife Protection Council’s president Craig Thomson, secretary Eve Kelly, member Roslyn Browning, Balnarring wildlife shelter operator Klarissa Garnaut, Crystal Ocean wildlife shelter’s Brenda Marmion, of at Rye, Warneet wildlife shelter operator Una Merrick, Greens candidate Paul Saunders and endorsed Liberal Party candidate Russel Joseph. When the second stage of the works begins in March workmen – not the dreaded forestry machine – will undertake low-key clearance works by hand. This time around, less vegetation will need to be cleared as the new type of steel-rope barrier will require only half the flex room – 1.5 metres – and a new emphasis will be placed on relocating and caring for wildlife. “VicRoads acknowledged they had made a mistake and that not enough work was done on the ground last time,” Ms Browning said. “They seem to have a greater sympathy for wildlife now.” Ms Kelly said better planning for wildlife corridors would allow wildlife groups to cope with high-impact events such as the vegetation clearing and alleviate much of the animals’ suffering – especially during times of stress. “People come from overseas to see our native animals and yet we are wiping them out,” she said.