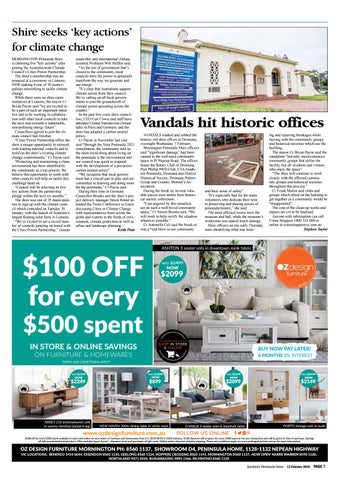 Shire seeks ‘key actions’ for climate change MORNINGTON Peninsula Shire is choosing five “key actions” after joining the Australia-wide Climate Council’s Cities Power Partnership. The shire’s membership was announced at a ceremony in Lismore, NSW making it one of 70 municipalities networking to tackle climate change. While there were no shire representatives at Lismore, the mayor Cr Bryan Payne said “we are excited to be a part of such an important initiative and to be working in collaboration with other local councils to take the next step towards a sustainable, non-polluting energy future”. Councillors agreed to join the climate council last October. “Cities Power Partnership offers the shire a unique opportunity to network with leading national councils and to build on the shire’s existing climate change commitments,” Cr Payne said. “Protecting and maintaining a clean environment has been identified by the community as a top priority. We believe this opportunity to work with other councils will help us tackle this challenge head on. “Council will be selecting its five key actions from the partnership pledge within the next six months.” The shire was one of 35 municipalities to sign up with the climate council which coincided on Tuesday 30 January with the launch of Australia’s largest floating solar farm in Lismore. “We’re excited to see a record number of councils jumping on board with the Cities Power Partnership,” climate

councillor and international climate scientist Professor Will Steffen said. “As the tier of government that’s closest to the community, local councils have the power to genuinely transform the way we generate and use energy. “It’s clear that Australians support climate action from their council. We’re calling on all local governments to join the groundswell of climate action spreading across the country.” In the past few years shire councillors, CEO Carl Cowie and staff have attended United Nations-run climate talks in Paris and Germany and the shire has adopted a carbon neutral policy. Cr Payne in November last year said “through the Your Peninsula 2021 consultation, the community told us the most loved thing about living on the peninsula is the environment and our council was quick to respond with the development of a pro-active carbon neutral policy”. “We recognise that local government has a crucial part to play and are committed to learning and doing more for the peninsula,” Cr Payne said. During their time in Germany Councillor Brooks and the shire’s project delivery manager Derek Rotter attended the Twins Conference in Essen discussing Cities in Climate Change with representatives from across the globe and experts in the fields of environment, climate protection as well as urban and landscape planning. Keith Platt

and their sense of safety”. “It’s especially bad for the many volunteers who dedicate their time to preserving and sharing pieces of peninsula history,” she said. The most affected rooms were the museum and hall, while the museum’s workroom was spared much damage. Shire officers on site early Thursday were identifying what was miss-

ing and repairing breakages while liaising with the community groups and historical societies which use the building. The mayor Cr Bryan Payne said the vandalism “not only inconveniences community groups that utilise the facility, but all residents and visitors who enjoy the space”. “The shire will continue to work closely with the affected community groups and historical societies throughout this process.” Cr Frank Martin said clubs and groups which relied on the building to get together as a community would be “disappointed”. The cost of the clean-up works and repairs are yet to be finalised. Anyone with information can call Crime Stoppers 1800 333 000 or online at crimestoppersvic.com.au Stephen Taylor

$100 off for every $500 spent available in-store and online on new orders of furniture and homewares from 6-2-2018 till 05-3-2018 inclusive. $100 discount will be given for every $500 spent in the one transaction and will be given at time of purchase. Savings off full recommended retail prices. Offer excludes Super Savers*, clearance stock and purchases off gift cards. Online orders discount excludes shipping. Terms and conditions apply see www.ozdesignfurntiure.com.au for more information.