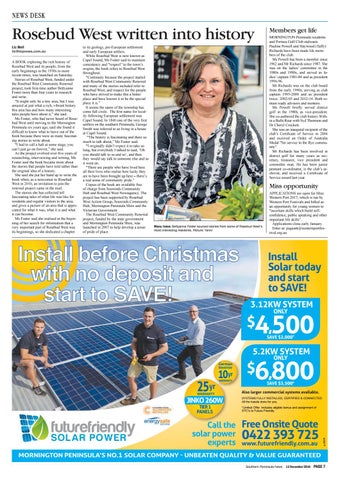 Rosebud West written into history Liz Bell liz@mpnews.com.au A BOOK exploring the rich history of Rosebud West and its people, from the early beginnings in the 1930s to more recent times, was launched on Saturday. Stories of Rosebud West, funded under the Rosebud West Community Renewal project, took first-time author Bettyanne Foster more than four years to research and write. “It might only be a tiny area, but I was amazed at just what a rich, vibrant history this area has and how many interesting tales people have about it,” she said. Ms Foster, who had never heard of Rosebud West until moving to the Mornington Peninsula six years ago, said she found it difficult to know what to leave out of the book because there were so many fascinating stories to write about. “I had to call a halt at some stage, you can’t just go on forever,” she said. As the project evolved over five years of researching, interviewing and writing, Ms Foster said the book became more about the stories that people have told rather than the original idea of a history. She said she put her hand up to write the book when, as a newcomer to Rosebud West in 2010, an invitation to join the renewal project came in the mail. The stories she has collected tell fascinating tales of what life was like for residents and regular visitors to the area, and gives a picture of an area that is appreciated for what it was, what it is and what it can become. Ms Foster said she realised at the beginning of her search for information that a very important part of Rosebud West was its beginnings, so she dedicated a chapter

to its geology, pre-European settlement and early European settlers. While Rosebud West is now known as Capel Sound, Ms Foster said to maintain consistency and “respect” to the town’s origins, the book refers to Rosebud West throughout. “Continuity because the project started with Rosebud West Community Renewal and many of the stories included refer to Rosebud West; and respect for the people who have strived to make this a better place and have known it to be the special place it is.” It seems the name of the township has come full circle. The first name for locality following European settlement was Capel Sound. In 1840 one of the very first settlers on the southern Peninsula, George Smith was referred to as living in a house at Capel Sound. “The history is fascinating and there so much to talk about,” Ms Foster said. “I originally didn’t expect it to take so long, but everybody I talked to said, ‘Oh you should talk to so and so’, and then they would say talk to someone else and so it went on. “There are people who have lived here all their lives who realise how lucky they are to have been brought up here – there’s a real sense of community pride.” Copies of the book are available free of charge from Seawinds Community Hub and Rosebud West Newsagency. The project has been supported by Rosebud West Action Group, Seawinds Community Hub, Mornington Peninsula Shire and the Victorian Government. The Rosebud West Community Renewal project, funded by the state government and Mornington Peninsula Shire, was launched in 2007 to help develop a sense of pride of place.

Members get life MORNINGTON Peninsula residents and Portsea Golf Club stalwarts Pauline Powell and Haywood (Taffy) Richards have been made life members of the club. Ms Powell has been a member since 1962 and Mr Richards since 1987. She was on the ladies’ committee in the 1980s and 1990s, and served as ladies’ captain 1981-84 and as president 1994-96. Mr Richards was on the club board from the early 1990s, serving as club captain 1995-2000 and as president twice: 2002-05 and 2012-14. Both remain ready advisors and mentors. Ms Powell briefly served district golf in the 1980s as vice-president. She co-authored the club history Within a Bulls Roar with Syd Thomson and Dr Cheryl Crockett. She was an inaugural recipient of the club’s Certificate of Service in 2004 and received an Order of Australia Medal “for service to the Rye community”. Mr Richards has been involved in district golf for many years as secretary, treasurer, vice president and committee man. He has been junior pennant co-ordinator, is the club’s archivist, and received a Certificate of Service award last year.

Many tales: Bettyanne Foster sourced stories from some of Rosebud West’s most interesting residents. Picture: Yanni

Install before Christmas with no deposit and start to SAVE!

APPLICATIONS are open for Miss Western Port 2017, which is run by Western Port Festivals and billed as an opportunity for young women to “ascertain skills which build selfconfidence, public speaking and other important life skills”. Applications close early January. Enter at: pageant@westernportfestival.org.au