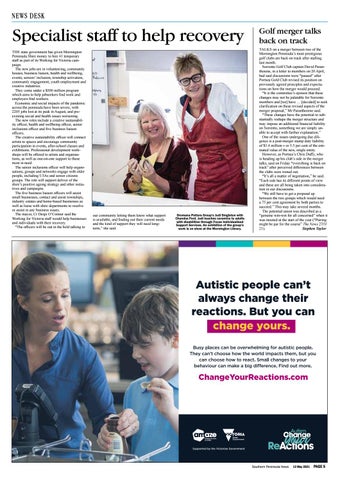 Golf merger talks back on track

THE state government has given Mornington Peninsula Shire money to hire 41 temporary staff as part of its Working for Victoria campaign. The new jobs are in volunteering, community houses, business liaison, health and wellbeing, events, seniors’ inclusion, township activation, community engagement, youth employment and creative industries. They come under a $500 million program which aims to help jobseekers find work and employers find workers.  Economic and social impacts of the pandemic across the peninsula have been severe, with 2205 jobs lost at its peak in August, and preexisting social and health issues worsening. The new roles include a creative sustainability officer, health and wellbeing officer, senior inclusions officer and five business liaison officers. The creative sustainability officer will connect artists to spaces and encourage community participation in events, after-school classes and exhibitions. Professional development workshops will be offered to artists and organisations, as well as one-on-one support to those most in need. The senior inclusions officer will help organisations, groups and networks engage with older people, including U3As and senior citizens groups. The role will support deliver of the shire’s positive ageing strategy and other initiatives and campaigns. The five business liaison officers will assist small businesses, contact and assist townships, industry estates and home-based businesses as well as liaise with shire departments to resolve or assist in any business issues. The mayor, Cr Despi O’Connor said the Working for Victoria staff would help businesses and individuals with their recovery. “The officers will be out in the field talking to

TALKS on a merger between two of the Mornington Peninsula’s most prestigious golf clubs are back on track after stalling last month. Sorrento Golf Club captain David Paranthoiene, in a letter to members on 20 April, had said discussions were “paused” after Portsea Gold Club revised its position on previously agreed principles and expectations on how the merger would proceed. “It is the committee’s opinion that these changes may not be palatable for Sorrento members and [we] have … [decided] to seek clarification on these revised aspects of the merger proposal,” Mr Paranthoiene said. “These changes have the potential to substantially reshape the merger structure and may impose an additional financial liability on Sorrento, something we are simply unable to accept with further explanation.” One of the issues undergoing due diligence is a post-merger stamp duty liability of $1.4 million – or 5.5 per cent of the estimated value of the new, single entity. However, as Portsea’s Chris Duffy, who is heading up his club’s side in the merger talks, said on Friday “everything is back on track” after perceived differences between the clubs were ironed out. “It’s all a matter of negotiation,” he said. “Each side has its different points of view and these are all being taken into consideration in our discussions. “We still have to get a proposal up between the two groups which would need a 75 per cent agreement by both parties to succeed.” This may take several months. The potential union was described as a “genuine win-win for all concerned” when it was mooted at the start of the year (“Pairing might be par for the course” The News 27/1/ 21). Stephen Taylor

our community letting them know what support is available, and finding out their current needs and the kind of support they will need longterm,” she said.

Dromana Potters Group’s Judi Singleton with Chandos Ford. Judi teaches ceramics to adults with disabilities through Focus Individualised Support Services. An exhibition of the group’s work is on show at the Mornington Library.