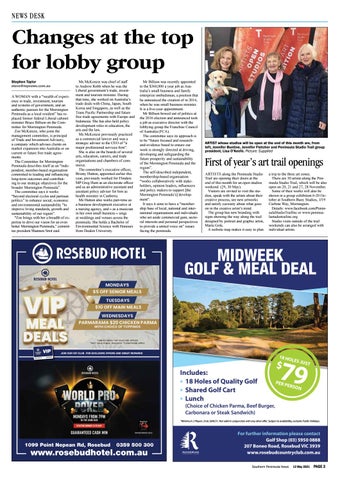 Changes at the top for lobby group Stephen Taylor steve@mpnews.com.au A WOMAN with a “wealth of experience in trade, investment, tourism and systems of government, and an authentic passion for the Mornington Peninsula as a local resident” has replaced former federal Liberal cabinet minister Bruce Billson on the Committee for Mornington Peninsula. Zoe McKenzie, who joins the management committee, is principal of Trade and Investment Advisory, a company which advises clients on market expansion into Australia or on current or future free trade agreements. The Committee for Mornington Peninsula describes itself as an “independent, member-based organisation committed to leading and influencing long-term outcomes and contributing to our strategic objectives for the broader Mornington Peninsula”. The committee says it works “beyond electoral cycles and partisan politics” to enhance social, economic and environmental sustainability “to improve living standards, growth and sustainability of our region”. “Zoe brings with her a breadth of expertise to drive our vision for an even better Mornington Peninsula,” committee president Shannon Smit said.

Ms McKenzie was chief of staff to Andrew Robb when he was the Liberal government’s trade, investment and tourism minister. During that time, she worked on Australia’s trade deals with China, Japan, South Korea and Singapore, as well as the Trans Pacific Partnership and future free trade agreements with Europe and Indonesia. She has also held policy development roles in education, the arts and the law. Ms McKenzie previously practiced as a commercial lawyer and was a strategic adviser to the CEO of “a major professional services firm”. She is also on the boards of several arts, education, careers, and trade organisations and chambers of commerce. The committee’s executive officer, Briony Hutton, appointed earlier this year, previously worked for Flinders MP Greg Hunt as an electorate officer and as an administrative assistant and assistant policy adviser for him as health minister in Canberra. Ms Hutton also works part-time as a business development executive at a nursing agency, and – as a musician in her own small business – sings at weddings and venues across the peninsula. She holds a Bachelor of Environmental Science with Honours from Deakin University.

Mr Billson was recently appointed to the $360,000 a year job as Australia’s small business and family enterprise ombudsman, a position that he announced the creation of in 2014, when he was small business minister. It is a five-year appointment. Mr Billson bowed out of politics at the 2016 election and announced took a job as executive director with the lobbying group the Franchise Council of Australia (FCA). The committee says its approach is to be “future focused and researchand-evidence based to ensure our work is strongly directed at driving, developing and safeguarding the future prosperity and sustainability of the Mornington Peninsula and the region”. The self-described independent, membership-based organisation “works collaboratively with stakeholders, opinion leaders, influencers and policy makers to support [the Mornington Peninsula’s] development”. It says it aims to have a “membership base of local, national and international organisations and individuals who set aside commercial gain, sectoral interests and personal perspectives to provide a united voice on” issues facing the peninsula.

ARTIST whose studios will be open at the end of this month are, from left, Jennifer Buntine, Jennifer Fletcher and Peninsula Studio Trail group president, Lisa O’Keefe. Picture: Supplied

First of year’s art trail openings ARTISTS along the Peninsula Studio Trail are opening their doors at the end of this month for an open studios weekend (29, 30 May). Visitors are invited to visit the studios, speak with the artists about their creative process, see new artworks and satisfy curiosity about what goes on in the creative artist’s mind. The group has new branding with signs showing the way along the trail designed by portrait and graphic artist, Marta Gola. A website map makes it easy to plan

a trip to the three art zones. There are 30 artists along the Peninsula Studio Trail, which will be also open on 20, 21 and 27, 28 November. Some of their works will also be shown in a group exhibition 6-20 October at Southern Buoy Studios, 1/19 Carbine Way, Mornington. Details: www.facebook.com/PeninsulaStudioTrailInc or www.peninsulastudiotrailinc.org Studio visits outside of the trail weekends can also be arranged with individual artists.

*Minimum 2 Players. Ends 30/6/21. Not valid in conjunction with any other offer. Subject to availability, excludes Public Holidays.