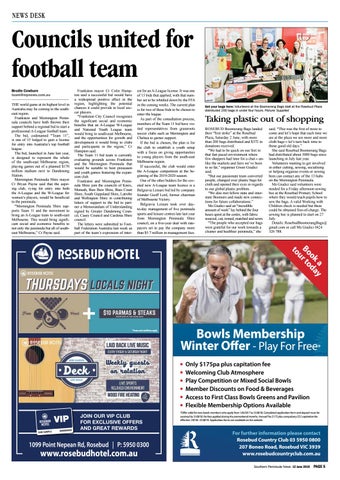 Councils united for football team Brodie Cowburn team@mpnews.com.au THE world game at its highest level in Australia may be coming to the southeast region. Frankston and Mornington Peninsula councils have both thrown their support behind a regional bid to start a professional A-League football team. The bid, codenamed “Team 11”, is one of 15 lodged to gain a license for entry into Australia’s top football league. The bid, launched in June last year, is designed to represent the whole of the south-east Melbourne region, playing games out of a planned $170 million stadium next to Dandenong Station. Mornington Peninsula Shire mayor Cr Bryan Payne said that the aspiring club, vying for entry into both the A-League and the W-League for women’s players, would be beneficial to the peninsula. “Mornington Peninsula Shire supports Team 11 and the movement to bring an A-League team to south-east Melbourne. This would bring significant social and economic benefits to not only the peninsula but all of southeast Melbourne,” Cr Payne said.

Frankston mayor Cr Colin Hampton said a successful bid would have a widespread positive effect in the region, highlighting the potential chances it could provide to local soccer players. “Frankston City Council recognises the significant social and economic benefits that an A-League W-League and National Youth League team would bring to south-east Melbourne, and the opportunities for growth and development it would bring to clubs and participants in the region,” Cr Hampton said. The Team 11 bid team is currently evaluating grounds across Frankston and the Mornington Peninsula that would be suitable to host preseason and youth games featuring the expansion club. Frankston and Mornington Peninsula Shire join the councils of Knox, Monash, Baw Baw Shire, Bass Coast Shire, South Gippsland Shire, Latrobe and Wellington Shire in contributing letters of support to the bid to partner a Memorandum of Understanding signed by Greater Dandenong Council, Casey Council and Cardinia Shire council. The letters were submitted to Football Federation Australia last week as part of the team’s expression of inter-

est for an A-League license. It was one of 15 bids that applied, with that number set to be whittled down by the FFA in the coming weeks. The current plan is for two of these bids to be chosen to enter the league. As part of the consultation process, members of the Team 11 bid have visited representatives from grassroots soccer clubs such as Mornington and Chelsea to garner support. If the bid is chosen, the plan is for the club to establish a youth setup with a focus on giving opportunities to young players from the south-east Melbourne region. If successful, the club would enter the A-League competition at the beginning of the 2019-2020 season. One of the other bidders for the coveted new A-League team licence is a Belgravia Leisure bid led by company founder Geoff Lord, former chairman of Melbourne Victory. Belgravia Leisure took over dayto-day management of five peninsula sports and leisure centres late last year from Mornington Peninsula Shire council, on a five-year deal with ratepayers set to pay the company more than $5.7 million in management fees.

Get your bags here: Volunteers at the Boomerang Bags stall at the Rosebud Plaza distributed 200 bags in under four hours. Picture: Supplied

Taking plastic out of shopping ROSEBUD Boomerang Bags landed their “first strike” at the Rosebud Plaza, Saturday 2 June, with more than 200 bags distributed and $372 in donations received. “We had to be quick on our feet in that fast paced environment where few shoppers had time for a chat – unlike the markets and fairs we’ve been to so far,” organiser Gwen Giudici said. “But our passionate team converted people, changed over plastic bags for cloth and opened their eyes in regards to our global plastic problem. “We also met fellow state and interstate Boomers and made new connections for future collaborations.” Ms Giudici said an “incredible amount of work” lay behind the four hours spent at the centre, with fabric sourced, cut, ironed, matched and sewn. “The people who accepted our bags were grateful for our work towards a cleaner and healthier peninsula,” she

said. “This was the first of more to come and let’s hope that each time we are at the plaza we see more and more cloth bags – let’s turn back time to those good old days.” She said Rosebud Boomerang Bags had distributed about 3000 bags since launching in July last year. Volunteers wanting to get involved in either cutting, sewing, socialising or helping organise events or sewing bees can contact any of the 13 hubs on the Mornington Peninsula. Ms Giudici said volunteers were needed for a Friday afternoon sewing bee at the Rosebud Primary School where they would teach pupils how to sew the bags. A valid Working with Children check is needed but these could be obtained free-of-charge. The sewing bee is planned to start on 27 July. Details: RosebudBoomerangBags@ gmail.com or call Ms Giudici 0424 326 788.