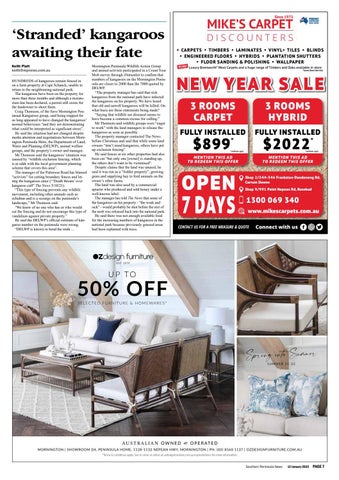 ‘Stranded’ kangaroos awaiting their fate Keith Platt keith@mpnews.com.au HUNDREDS of kangaroos remain fenced in on a farm property at Cape Schanck, unable to return to the neighbouring national park. The kangaroos have been on the property for more than three months and although a moratorium has been declared, a permit still exists for the landowner to shoot them. Craig Thomson, of the Save Mornington Peninsual Kangaroos group, said being trapped for so long appeared to have changed the kangaroos’ normal behaviours “and they are demonstrating what could be interpreted as significant stress”. He said the situation had not changed despite media attention and negotiations between Mornington Peninsula Shire, the Department of Land, Water and Planning (DELWP), animal welfare groups, and the property’s owner and manager. Mr Thomson said the kangaroos’ situation was caused by “wildlife exclusion fencing, which is at odds with the local government planning scheme that covers this area”. The manager of the Patterson Road has blamed “activists” for cutting boundary fences and letting the kangaroos enter (“‘Death threats’ over kangaroo cull” The News 5/10/21). “This type of fencing prevents any wildlife movement, including other animals such as echidnas and is a scourge on the peninsula’s landscape,” Mr Thomson said. “We know of no one who has or who would cut the fencing and do not encourage this type of vandalism against private property.” He said the DELWP’s official estimate of kangaroo number on the peninsula were wrong. “DELWP is known to bend the truth …

Mornington Peninsula Wildlife Action Group and animal activists participated in a Count Your Mob survey through iNaturalist to confirm that numbers of kangaroos on the Mornington Peninsula are closer to 2000 than the 7000 quoted by DELWP. “The property manager has said that sick kangaroos from the national park have infected the kangaroos on his property. We have heard that old and unwell kangaroos will be killed. On what basis are these statements being made? “Saying that wildlife are diseased seems to have become a common excuse for culling.” Mr Thomson said wildlife groups were “eager to work” with the land managers to release the kangaroos as soon as possible. The property manager contacted The News before Christmas and said that while some land owners “don’t mind kangaroos, others have put up exclusion fencing”. He said fences at six other properties had also been cut “but only one [owner] is standing up, the others don’t want to be victimised”. Despite claims that the land was unused, he said it was run as a “fodder property”, growing grass and supplying hay to feed animals on the owner’s other farms. The land was also used by a commercial apiarist who produced and sold honey under a well-known label. The manager has told The News that some of the kangaroos on his property - “the weak and sick” - would probably be shot before the rest of the mob was released back into the national park. He said there was not enough available food for the increasing numbers of kangaroos in the national park because previously grassed areas had been replanted with trees.