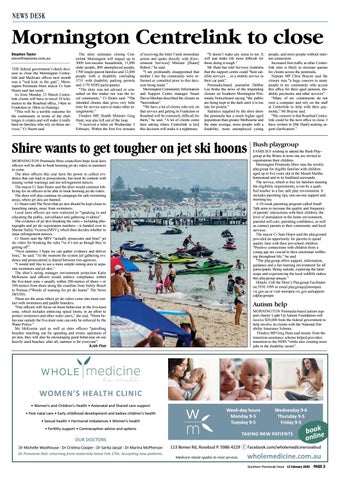 Mornington Centrelink to close Stephen Taylor steve@mpnews.com.au THE federal government’s shock decision to close the Mornington Centrelink and Medicare offices next month was a “real kick in the guts”, Mornington Peninsula Shire mayor Cr Sam Hearn said last week. As from Monday 23 March Centrelink clients will have to travel 24 kilometres to the Rosebud office, 14km to Frankston or 18km to Hastings. “This will be a terrible outcome for the community in terms of the challenges it creates and will make it really hard on families who rely on those services,” Cr Hearn said.

The shire estimates closing Centrelink Mornington will impact up to 3000 low-income households, 11,000 older people, 800 unemployed people, 1700 single-parent families and 12,000 people with a disability (including 3731 with disability parking permits and 1170 NDIS participants). “The shire was not advised or consulted on this matter nor was the local community,” Cr Hearn said. “The intended closure date gives very little time for service users to make other arrangements.” Flinders MP, Health Minister Greg Hunt, was also left out of the loop. “I received a letter on Wednesday 5 February. Within the first five minutes

of receiving the letter I took immediate action and spoke directly with [Government Services] Minister [Stuart] Robert,” he said. “I am profoundly disappointed that neither I nor the community were informed or consulted prior to this decision being made.” Mornington Community Information and Support Centre manager Stuart Davis-Meehan described the closure as “horrendous”. “We have a lot of clients who rely on that service and getting to Frankston or Rosebud will be extremely difficult for them,” he said. “A lot of clients come here asking where Centrelink is [so] this decision will make it a nightmare.

“It doesn’t make any sense to me. It will just make life more difficult for those doing it tough.” Mr Hunt has told Services Australia that the support centre could “host satellite services ... or a mobile service in their car park”. Peninsula-based journalist Debbie Lee broke the news of the impending closure on Southern Mornington Peninsula Noticeboard saying “the public are being kept in the dark until it is too late for protest.” Statistics supplied by the shire show the peninsula has a much higher aged population than greater Melbourne and the state average; more people with a disability; more unemployed young

Shire wants to get tougher on jet ski hoons MORNINGTON Peninsula Shire councillors hope local laws officers will be able to book hooning jet ski riders in summers to come. The shire officers this year have the power to collect evidence that can lead to prosecutions, but must be content with issuing verbal warnings and not infringement notices. The mayor Cr Sam Hearn said the shire would continue lobbying for its officers to be able to book hooning jet ski riders. The shire will also continue its campaign for safe swimming areas, where jet skis are banned. Cr Hearn told The News that jet skis should be kept closer to launching ramps, away from swimmers. Local laws officers are now restricted to “speaking to and educating the public, surveillance and gathering evidence”. The evidence of jet skis breaking the rules – including photographs and jet ski registration numbers - is handed over to Marine Safety Victoria (MSV), which then decides whether to issue infringement notices. Cr Hearn said the MSV “actually prosecutes and fines” jet ski riders for breaking the rules “so it’s not as though they’re getting off”. “Next summer, I hope we can gather evidence and deliver fines,” he said. “At the moment the system [of gathering evidence and prosecution] is shared between two agencies. “I would still like to see a more simple zoning area to separate swimmers and jet skis.” The shire’s acting manager environment protection Katie McKenzie said officers would enforce compliance within the five-knot zone – usually within 200-metres of shore – or 500-metres from shore along the coastline from Safety Beach to Portsea (“Words of warning for jet ski hoons” The News 28/1/20). These are the areas where jet ski riders come into most contact with swimmers and paddle boarders. “Our officers will focus on hoon behaviour in the five-knot zone, which includes enforcing speed limits, in an effort to protect swimmers and other water users,” she said. “Hoon behaviour outside the five-knot zone can only be enforced by the Water Police.” Ms McKenzie said as well as shire officers “patrolling beaches watching out for speeding and erratic operation of jet skis, they will also be encouraging good behaviour on our heavily used beaches: after all, summer is for everyone”. Keith Platt

people, and more people without internet connection. Increased foot traffic at other Centrelink sites is likely to increase queues for clients across the peninsula. Nepean MP Chris Brayne said the closure was “a huge concern to many people in my community who access this office for their aged pension, disability payments, and other services”. “Many of my constituents do not own a computer and rely on the staff at Centrelink to help with their payments,” Mr Brayne said. “My concern is that Rosebud Centrelink could be the next office to close. I have written to [Mr Hunt] seeking urgent clarification.”

Bush playgroup FAMILIES wishing to attend the Bush Playgroup at the Briars in term one are invited to registrations their children. Mornington Peninsula Shire runs the weekly playgroup for eligible families with children aged up to five years old at the Mount Martha homestead and in its bushland surrounds. The service, which is free for families meeting the eligibility requirements, is run by a qualified teacher in a fun, safe play environment. It includes parenting tips, one-on-one support and morning tea. A 10-week parenting program called Small Talk aims to increase the quality and frequency of parents’ interactions with their children; the level of stimulation in the home environment; parental self-care; parenting confidence, as well as connect parents to their community and local services. The mayor Cr Sam Hearn said the playground provided an opportunity for parents to spend quality time with their pre-school children. “Positive connections with children from a young age are crucial to their emotional wellbeing throughout life,” he said. “The playgroup offers support, information, guidance and a fun learning environment for all participants. Being outside, exploring the landscape and experiencing the local wildlife makes this playgroup unique.” Details: Call the Shire’s Playgroup Facilitator on 5950 1099 or email playgroup@mornpen. vic.gov.au or visit mornpen.vic.gov.au/supportedplaygroups.