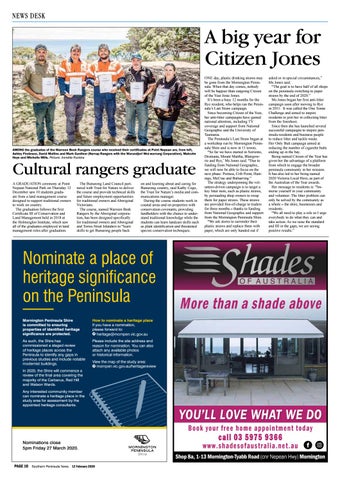 A big year for Citizen Jones

AMONG the graduates of the Warreen Beek Rangers course who received their certificates at Point Nepean are, from left, Ashley Firebrace, David Mullins and Mark Gardiner (Narrap Rangers with the Wurundjeri Woi-wurrung Corporation), Malcolm Hoye and Michelle Mills. Picture: Annette Ruzicka

Cultural rangers graduate A GRADUATION ceremony at Point Nepean National Park on Thursday 12 December saw 10 students graduate from a land management course designed to support traditional owners to work on country. The graduation follows the first Certificate III of Conservation and Land Management held in 2018 at the Holmesglen Institute, which saw all of the graduates employed in land management roles after graduation.

on and learning about and caring for Bunurong country, said Kathy Cogo, the Trust for Nature’s media and communications manager. During the course students work in coastal areas and on properties with conservation covenants, providing landholders with the chance to understand traditional knowledge while the students can learn landcare skills such as plant identification and threatened species conservation techniques.

How to nominate a heritage place If you have a nomination, please forward to: heritage@mornpen.vic.gov.au

As such, the Shire has commissioned a staged review of heritage places across the Peninsula to identify any gaps in previous studies and include notable modernist buildings.

Please include the site address and reason for nomination. You can also attach any available photos or historical information.

In 2020, the Shire will commence a review of the final area covering the majority of the Cerberus, Red Hill and Watson Wards.

ONE day, plastic drinking straws may be gone from the Mornington Peninsula. When that day comes, nobody will be happier than outgoing Citizen of the Year Josie Jones. It’s been a busy 12 months for the Rye resident, who helps run the Peninsula’s Last Straw campaign. Since becoming Citizen of the Year, her anti-litter campaigns have gained national attention, including TV coverage and support from National Geographic and the University of Tasmania. The Peninsula’s Last Straw began at a workshop run by Mornington Peninsula Shire and is now in 11 towns. “So far we have started in Sorrento, Dromana, Mount Martha, Blairgowrie and Rye,’ Ms Jones said. “Due to funding from National Geographic, we will now be able to focus on the next phase: Portsea, Crib Point, Hastings, McCrae and Balnarring.” The strategy underpinning the volunteer-driven campaign is to target a key litter item, such as plastic straws, by persuading shop owners to swap them for paper straws. These straws are provided free-of-charge to traders for three months – thanks to funding from National Geographic and support from the Mornington Peninsula Shire. “We ask stores to surrender their plastic straws and replace them with paper, which are only handed out if

asked or in special circumstances,” Ms Jones said. “The goal is to have half of all shops on the peninsula switching to paper straws by the end of 2020.” Ms Jones began her first anti-litter campaign soon after moving to Rye in 2011. It was called the One Tonne Challenge and aimed to inspire residents to join her in collecting litter from the foreshore. Since then she has launched several successful campaigns to inspire peninsula residents and business people to reduce litter and tackle waste. Her Only Butt campaign aimed at reducing the number of cigarette butts ending up in the bay. Being named Citizen of the Year has given her the advantage of a platform from which to engage the broader peninsula community in her mission. It has also led to her being named 2020 Victoria Local Hero, as part of the Australian of the Year awards. Her message to residents is: “Immerse yourself in your community and volunteer. The litter problem can only be solved by the community as a whole – the shire, businesses and residents. “We all need to play a role so I urge everybody to do what they can and take action. As we raise the standard and fill in the gaps, we are seeing positive results.”

More than a shade above

View the map of the study area: mornpen.vic.gov.au/heritagereview

Any interested community member can nominate a heritage place in the study area for assessment by the appointed heritage consultants.