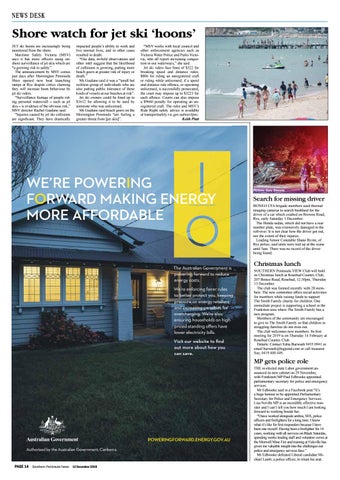 impacted people’s ability to work and live normal lives, and in other cases resulted in death. “Our data, in-field observations and other intel suggest that the likelihood of collisions is growing, putting more beach goers at greater risk of injury or death.” Ms Gualano said it was a “small but reckless group of individuals who are also putting public tolerance of these kinds of vessels at our beaches at risk”. Jet ski owners could be fined up to $1612 for allowing it to be used by someone who was unlicensed. Ms Gualano said beach goers on the Mornington Peninsula “are feeling a greater threat from [jet skis]”.

“MSV works with local council and other enforcement agencies such as Victoria Water Police and Parks Victoria, who all report increasing congestion in our waterways,” she said. Jet ski riders face fines of $322 for breaking speed and distance rules; $806 for riding an unregistered craft or riding while unlicensed; if a speed and distance rule offence, or operating unlicensed, is successfully prosecuted, the court may impose up to $3223 for each offence. Courts can also impose a $9660 penalty for operating an unregistered craft. The rules and MSV’s Ride Right safety advice is available at transportsafety.vic.gov.au/msv/pwc Keith Platt

The Australian Government is powering forward to reduce energy costs. We’re enforcing fairer rules to better protect you, keeping pressure on energy retailers and increasing penalties for overcharging. We’re also ensuring households on high priced standing offers have lower electricity bills. Visit our website to find out more about how you can save.

Search for missing driver BONEO CFA brigade members used thermal imaging cameras to search bushland for the driver of a car which crashed on Browns Road, Rye, early Saturday 1 December. The Honda sedan, which did not have a rear number plate, was extensively damaged in the roll-over. It is not clear how the driver got out, nor the extent of their injuries. Leading Senior Constable Shane Byrne, of Rye police, said units were tied up at the scene until 5am. There was no record of the driver being found.

Christmas lunch SOUTHERN Peninsula VIEW Club will hold its Christmas lunch at Rosebud Country Club, 207 Boneo Road, Rosebud, 12.30pm, Thursday 13 December. The club was formed recently with 28 members. The new committee offers social activities for members while raising funds to support The Smith Family charity for children. One immediate project is supporting a school in the Frankston area where The Smith Family has a new program. Members of the community are encouraged to give to The Smith Family so that children in struggling families do not miss out. The club welcomes new members. Its first meeting for 2019 is on Thursday 14 February at Rosebud Country Club. Details: Contact Edna Burwash 9455 0941 or email burwash@bigpond.com or call treasurer Sue, 0419 400 449.

THE re-elected state Labor government announced its new cabinet on 29 November, with Frankston MP Paul Edbrooke appointed parliamentary secretary for police and emergency services. Mr Edbrooke said in a Facebook post “it’s a huge honour to be appointed Parliamentary Secretary for Police and Emergency Services. Lisa Neville MP is an incredibly effective minister and I can’t tell you how much I am looking forward to working beside her. “I have worked alongside ambos, SES, police officers and firefighters for a long time. I know what it’s like for first responders because I have been one myself. Having been a firefighter for 14 years, working with all services on Black Saturday, spending weeks leading staff and volunteer crews at the Morwell Mine Fire and training at Fiskville has given me valuable insight into the challenges our police and emergency services face.” Mr Edbrooke defeated Liberal candidate Michael Lamb, a police officer, to retain his seat.