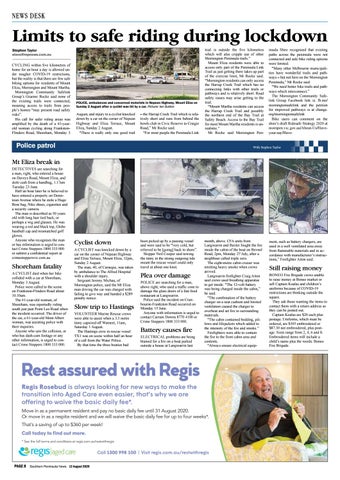 Limits to safe riding during lockdown Stephen Taylor steve@mpnews.com.au CYCLING within five kilometres of home for an hour a day is allowed under tougher COVID-19 restrictions, but the reality is that there are few safe biking options for residents of Mount Eliza, Mornington and Mount Martha. Mornington Community Safelink Group’s Graeme Rocke said none of the existing trails were connected, meaning access to trails from people’s homes “may present road safety risks”. His call for safer riding areas was amplified by the death of a 41-yearold woman cycling along FrankstonFlinders Road, Shoreham, Monday 3

POLICE, ambulances and concerned motorists in Nepean Highway, Mount Eliza on Sunday 2 August after a cyclist was hit by a car. Picture: Ian Button

August, and injury to a cyclist knocked down by a car on the corner of Nepean Highway and Eliza Terrace, Mount Eliza, Sunday 2 August. “There is really only one good trail

– the Harrap Creek Trail which is relatively short and runs from behind the bowls club in Civic Reserve to Craigie Road,” Mr Rocke said. “For most people the Peninsula Link

trail is outside the five kilometres which will also cripple use of other Mornington Peninsula trails.” Mount Eliza residents were able to access only part of the Peninsula Link Trail as just getting there takes up part of the exercise limit, Mr Rocke said. “Mornington residents can only access the Harrap Creek Trail which has no connecting links with other trails or pathways and is relatively short. Road safety issues may arise getting to the trail. “Mount Martha residents can access the Harrap Creek Trail and possibly the northern end of the Bay Trail at Safety Beach. Access to the Bay Trail for most Mount Martha residents is unrealistic.” Mr Rocke said Mornington Pen-

insula Shire recognised that existing paths across the peninsula were not connected and safe bike riding options were limited. “Many other Melbourne municipalities have wonderful trails and pathways – but not here on the Mornington Peninsula,” Mr Rocke said. “We need better bike trails and pathways which interconnect.” The Mornington Community Safelink Group Facebook link is: fb.me/ morningtonsafelink and the petition for improved pathways is at change. org/morningtonsafelink Bike users can comment on the shire’s draft Ridesafe Strategy 2020 at mornpen.vic.gov.au/About-Us/Haveyour-say/Have-

Mt Eliza break in DETECTIVES are searching for a man, right, who entered a house on Daveys Road, Mount Eliza, and stole cash from a handbag, 1.17am Tuesday 23 June. Half an hour later he is believed to have entered a property on Denistoun Avenue where he stole a Hugo Boss bag, Nike shoes, cigarettes and a security camera. The man is described as 50 years old with long hair tied back, or perhaps a wig and glasses. He was wearing a red and black top, Globe baseball cap and mismatched golf gloves. Anyone who recognises the man or has information is urged to contact Crime Stoppers 1800 333 000 or submit a confidential report at crimestoppersvic.com.au

Shoreham fatality A CYCLIST died when her bike collided with a car at Shoreham, Monday 3 August. Police were called to the scene on Frankston-Flinders Road about 10.10am. The 41-year-old woman, of Shoreham, was reportedly riding south just past Point Leo Road when the incident occurred. The driver of the car, a 61-year-old Mont Albert woman, was assisting police with their inquiries. Anyone who saw the collision, or who has dash-cam footage or any other information, is urged to contact Crime Stoppers 1800 333 000.

Cyclist down A CYCLIST was knocked down by a car on the corner of Nepean Highway and Eliza Terrace, Mount Eliza, 12pm, Sunday 2 August. The man, 40, of Carnegie, was taken by ambulance to The Alfred Hospital with a shoulder injury. Sergeant Jeremy Michau, of Mornington police, said the Mt Eliza man driving the car was charged with failing to give way and handed a $289 penalty notice.

Slow trip to Hastings VOLUNTEER Marine Rescue crews were able to assist when a 3.3 metre tinny capsized off Warneet, 11am, Saturday 1 August. The Hastings crew in rescue vessel TX1 was on scene within half an hour of a call from the Water Police. By that time the three boaties had

been picked up by a passing vessel and were said to be “very cold, but relieved to be [going] back to shore”. Skipper Neil Cooper said towing the tinny in the strong outgoing tide meant the rescue vessel could only travel at about one knot.

Plea over damage POLICE are searching for a man, above right, who used a traffic cone to damage the glass doors of a fast food restaurant at Langwarrin. Police said the incident on Cranbourne-Frankston Road occurred on Monday 15 June. Anyone with information is urged to contact Carrum Downs 8770 4100 or Crime Stoppers 1800 333 000.

month, above. CFA units from Langwarrin and Baxter fought the fire inside the cabin of the boat on Bevnol Road, 2pm, Monday 27 July, after a neighbour called triple zero. The eight-metre cabin cruiser was emitting heavy smoke when crews arrived. Langwarrin firefighter Craig Aiton said crews used breathing apparatus to get inside. “The 12-volt battery was being charged inside the cabin,” he said. “The combination of the battery charger on a seat cushion and limited ventilation caused the charger to overheat and set fire to surrounding materials. “The cabin contained bedding, pillows and lifejackets which added to the intensity of the fire and smoke.” Firefighters were able to contain the fire to the front cabin area and contents. “Always ensure electrical equip-

Rest assured with Regis Regis Rosebud is always looking for new ways to make the transition into Aged Care even easier, that’s why we are offering to waive the basic daily fee*.

Call today to find out more. * See the full terms and conditions at regis.com.au/restwithregis

ment, such as battery chargers, are used in a well ventilated area away from flammable materials and in accordance with manufacturer’s instructions,” Firefighter Aiton said.

Still raising money BONEO Fire Brigade crews unable to raise money at Boneo market or sell Captain Koalas and children’s uniforms because of COVID-19 restrictions are thinking outside the square. They ask those wanting the items to contact them with a return address so they can be posted out. Captain Koalas are $20 each plus postage. Uniforms, which must be ordered, are $105 embroidered or $87.50 not embroidered, plus postage. Sizes range from 2, 4, 6 and 8. Embroidered items will include a child’s name plus the words: Boneo Fire Brigade.