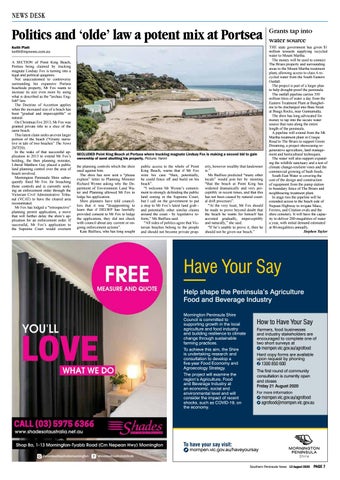 Politics and ‘olde’ law a potent mix at Portsea

THE state government has given $1 million towards supplying recycled water to Mount Martha. The money will be used to connect The Briars property and surrounding areas to the Mount Martha treatment plant, allowing access to class A recycled water from the South Eastern Outfall. The project is part of a larger plan to help drought-proof the peninsula. The outfall pipeline carries 350 million litres of water a day from the Eastern Treatment Plant at Bangholme to be discharged into Bass Strait at Boags Rocks, near Gunnamatta. The shire has long advocated for money to tap into the secure water source that runs along the entire length of the peninsula. A pipeline will extend from the Mt Martha treatment plant in Craigie Road to The Briars to support Green Dreaming, a project showcasing regenerative agriculture, land management and horticultural techniques. The water will also support expanding the wildlife sanctuary and a test of climate change-resilient vines and the commercial growing of bush foods. South East Water is covering the cost of the design and construction of equipment from the pump station to boundary fence of The Briars and neighbouring treatment plant. In stage two the pipeline will be extended across to the beach side of Nepean Highway to irrigate Mace, Ferrero, and Citation ovals and the shire cemetery. It will have the capacity to deliver 200-megalitres of water a year, with initial demand estimated at 80-megalitres annually. Stephen Taylor

A SECTION of Point King Beach, Portsea being claimed by trucking magnate Lindsay Fox is turning into a legal and political quagmire. Not unaccustomed to controversy surrounding his expansive Portsea beachside property, Mr Fox wants to increase its size even more by using what is described as the “archaic English“ law. The Doctrine of Accretion applies when the increased size of a beach has been “gradual and imperceptible” or natural. On Christmas Eve 2013, Mr Fox was granted private title to a slice of the same beach. This latest claim seeks an even larger portion of the beach (“Grainy narrative in tale of two beaches” The News 20/7/20). In the wake of that successful application in 2013 to extend Mr Fox’s holding, the then planning minister, Liberal Matthew Guy placed a public land planning control over the area of beach involved. Mornington Peninsula Shire subsequently fined Mr Fox for breaching those controls and is currently seeking an enforcement order through the Victorian Civil Administrative Tribunal (VCAT) to have the cleared area reconstituted. Mr Fox has lodged a “retrospective” planning permit application, a move that will further delay the shire’s application for an enforcement order. If successful, Mr Fox’s application to the Supreme Court would overturn

SECLUDED Point King Beach at Portsea where trucking magnate Lindsay Fox is making a second bid to gain ownership of sand abutting his property. Picture: Yanni the planning controls which the shire used against him. The shire has now sent a “please explain” letter to Planning Minister Richard Wynne asking why the Department of Environment Land Water and Planning allowed Mr Fox to lodge his application. Shire planners have told councillors that it was “disappointing to learn that if DELWP has lawfully provided consent to Mr Fox to lodge the application, they did not check with council about any current or ongoing enforcement actions”. Kate Baillieu, who has long sought

public access to the whole of Point King Beach, warns that if Mr Fox wins his case “then, potentially, he could fence off and build on his beach”. “I welcome Mr Wynne’s commitment to strongly defending the public land zoning in the Supreme Court, but I call on the government to put a stop to Mr Fox’s latest land grab and potentially other similar claims around the coast - by legislative reform,” Ms Baillieu said. “All sides of politics agree that Victorian beaches belong to the people and should not become private prop-

erty, however wealthy that landowner is.” Ms Baillieu predicted “many other locals” would join her by insisting “that the beach at Point King has widened dramatically and very perceptibly in recent times, and that this has not been caused by natural coastal drift processes”. “At the very least, Mr Fox should be made to prove beyond doubt that the beach he wants for himself has accreted gradually, imperceptibly and naturally,” she said. “If he’s unable to prove it, then he should not be given our beach.”

Have Your Say Help shape the Peninsula’s Agriculture Food and Beverage Industry Mornington Peninsula Shire Council is committed to supporting growth in the local agriculture and food industry and building resilience to climate change through sustainable farming practices. To achieve this aim, the Shire is undertaking research and consultation to develop a five-year Food Economy and Agroecology Strategy. The project will examine the region’s Agriculture, Food and Beverage Industry at an economic, social and environmental level and will consider the impact of recent shocks, such as COVID-19, on the economy.

How to Have Your Say Farmers, food businesses and industry stakeholders are encouraged to complete one of two short surveys at

Hard copy forms are available upon request by phoning

To have your say visit: