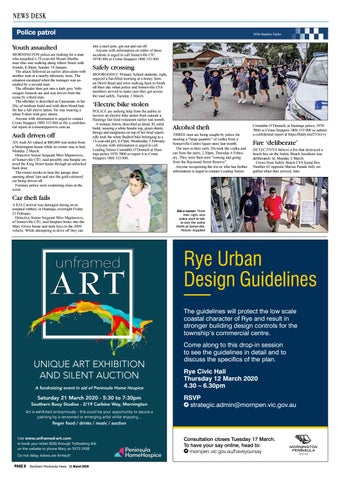 NEWS DESK Police patrol Youth assaulted MORNINGTON police are looking for a man who assaulted a 19-year-old Mount Martha man who was walking along Albert Street with friends, 8.30pm, Sunday 19 January. The attack followed an earlier altercation with another man at a nearby takeaway store. The situation escalated when the teenager was assaulted by a second man. The offender then got into a dark grey Volkswagen Amarok ute and was driven from the scene by a third man. The offender is described as Caucasian, in his 20s, of medium build and with short blond hair. He has a full sleeve tattoo. He was wearing a white T-shirt with grey shorts. Anyone with information is urged to contact Crime Stoppers 1800 333 000 or file a confidential report at crimestoppersvic.com.au

Audi driven off AN Audi A6 valued at $80,000 was stolen from a Mornington house while its owner was in bed, Monday 2 March. Detective Senior Sergeant Miro Majstorovic, of Somerville CIU, said possibly one burglar entered the King Street house through an unlocked back door. The owner awoke to hear the garage door opening about 5am and saw the gold-coloured car being driven off. Forensic police were examining clues at the scene.

Safely crossing MOOROODUC Primary School students, right, enjoyed a fun-filled morning at a honey farm on Derril Road and were walking back to finish off their day when police and Somerville CFA members arrived to make sure they got across the road safely, Tuesday 3 March.

‘Electric bike stolen POLICE are seeking help from the public to recover an electric bike stolen from outside a Hastings fast food restaurant earlier last month. A woman, below, described as about 30, solid build, wearing a white hoodie top, green shorts, thongs and sunglasses on top of her head reportedly took the white Budtrol bike belonging to a 15-year-old girl, 8.47pm, Wednesday 5 February. Anyone with information is urged to call Leading Senior Constable O’Donnell at Hastings police 5970 7800 or report it to Crime Stoppers 1800 333 000.

Alcohol theft THREE men are being sought by police for stealing a “large quantity” of vodka from a Somerville Centro liquor store last month. The men in their early 20s took the vodka and ran from the store, 2.50pm, Thursday 6 February. They were then seen “coming and going from the Raymond Street Reserve”. Anyone recognising the trio or who has further information is urged to contact Leading Senior

Car theft fails A KIA Carnival was damaged during an attempted robbery in Hastings, overnight Friday 21 February. Detective Senior Sergeant Miro Majstorovic, of Somerville CIU, said burglars broke into the Mary Grove house and stole keys to the 2009 vehicle. While attempting to drive off they ran

Did a runner: Three men, right, who police want to talk to over the vodka thefts at Somerville. Picture: Supplied

Come along to this drop-in session to see the guidelines in detail and to discuss the specifics of the plan. Rye Civic Hall Thursday 12 March 2020 4.30 – 6.30pm RSVP strategic.admin@mornpen.vic.gov.au

Art is exhibited anonymously - this could be your opportunity to secure a painting by a renowned or emerging artist whilst enjoying...

finger food / drinks / music / auction Visit www.unframed-art.com to book your ticket ($30) through TryBooking link on the website or phone Mary on 5973 2438 Do not delay, tickets are limited!!

Consultation closes Tuesday 17 March. To have your say online, head to: mornpen.vic.gov.au/haveyoursay