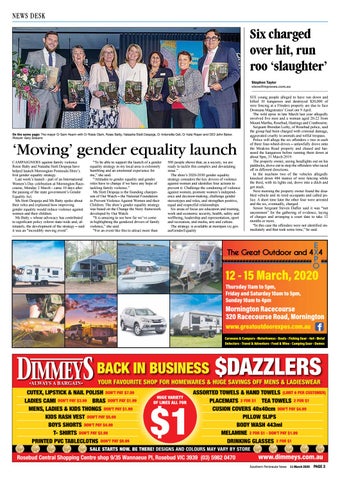 “To be able to support the launch of a gender equality strategy in my local area is extremely humbling and an emotional experience for me,” she said. “Attitudes to gender equality and gender roles have to change if we have any hope of tackling family violence.” Ms Stott Despoja is the founding chairperson of Our Watch – the National Foundation to Prevent Violence Against Women and their Children. The shire’s gender equality strategy was based on the Change the Story framework developed by Our Watch. “It is amazing to see how far we’ve come in highlighting the gendered drivers of family violence,” she said. “For an event like this to attract more than

500 people shows that, as a society, we are ready to tackle this complex and devastating issue.” The shire’s 2020-2030 gender equality strategy considers the key drivers of violence against women and identifies four actions to prevent it: Challenge the condoning of violence against women; promote women’s independence and decision-making; challenge gender stereotypes and roles, and strengthen positive, equal and respectful relationships Six areas of focus are education and training, work and economic security, health, safety and wellbeing, leadership and representation, sport and recreation, and media, arts and culture. The strategy is available at mornpen.vic.gov. au/GenderEquality

SIX young people alleged to have run down and killed 10 kangaroos and destroyed $20,000 of wire fencing at a Flinders property are due to face Dromana Magistrates’ Court om 9 April. The wild spree in late March last year allegedly involved five men and a woman aged 20-22 from Mount Martha, Rosebud, Hastings and Cranbourne. Sergeant Brendan Leihy, of Rosebud police, said the group had been charged with criminal damage, aggravated cruelty to animals and wilful trespass. Police will allege the six offenders – two in each of three four-wheel-drives – unlawfully drove onto the Meakins Road property and chased and harassed the kangaroos before running them down at about 9pm, 31 March 2019. The property owner, seeing headlights out on his paddocks, drove out to stop the offenders who raced off in different directions. In the mayhem two of the vehicles allegedly knocked down 484 metres of wire fencing while the third, with its lights out, drove into a ditch and got stuck. Next morning the property owner found the disabled vehicle and its tired occupants and called police. A short time later the other four were arrested and the six, eventually, charged. Senior Sergeant Steven Duffee said it was “not uncommon” for the gathering of evidence, laying of charges and arranging a court date to take 12 months or more. “In this case the offenders were not identified immediately and that took some time,” he said.

HUGE VARIETY OF LINES ALL FOR

SALE STARTS NOW. BE THERE! DESIGNS AND COLOURS MAY VARY BY STORE