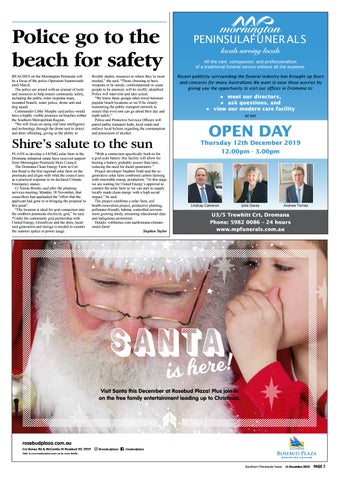 Police go to the beach for safety BEACHES on the Mornington Peninsula will be a focus of the police Operation Summersafe until March. The police are armed with an arsenal of tools and resources to help ensure community safety, including the public order response team, mounted branch, water police, drone unit and dog squad. Commander Libby Murphy said police would have a highly visible presence on beaches within the Southern Metropolitan Region. “We will focus on using real time intelligence and technology through the drone unit to detect and deter offending, giving us the ability to

flexibly deploy resources to where they’re most needed,” she said. “Those choosing to have weapons or be unruly, confrontational or cause people to be alarmed, will be swiftly identified. Police will intervene and take action. “We know these groups often travel between popular beach locations so we’ll be closely monitoring the public transport network to ensure that everyone can go about their day and night safely.” Police and Protective Services Officers will patrol public transport hubs, local roads and enforce local bylaws regarding the consumption and possession of alcohol.

Shire’s salute to the sun

PLANS to develop a 4.85MG solar farm in the Dromana industrial estate have received support from Mornington Peninsula Shire Council. The Dromana Clean Energy Farm in Collins Road is the first regional solar farm on the peninsula and aligns with what the council sees as a practical response to its declared Climate Emergency stance. Cr Simon Brooks said after the planning services meeting, Monday 18 November, that councillors had applauded the “effort that the applicant had gone to in bringing the proposal to this point”. “The location is ideal for grid connection into the southern peninsula electricity grid,” he said. “Under the community grid partnership with United Energy, GreenSync and the shire, localised generation and storage is needed to counter the summer spikes in power usage.

mornington locals serving locals All the care, compassion, and professionalism of a traditional funeral service without all the expense. Recent publicity surrounding the funeral industry has brought up fears and concerns for many Australians.We want to ease these worries by giving you the opportunity to visit our offices in Dromana to:

• meet our directors, • ask questions, and • view our modern care facility at our

Visit Santa this December at Rosebud Plaza! Plus join in on the free family entertainment leading up to Christmas.

Refer to www.rosebudplaza.com.au for more details.