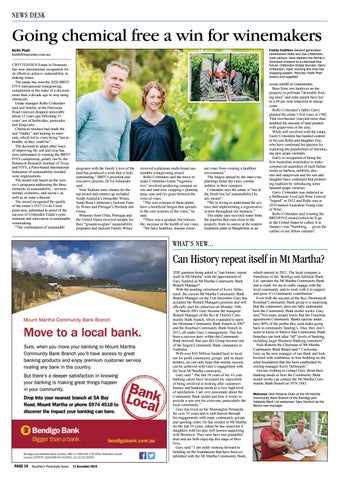 Going chemical free a win for winemakers Keith Platt keith@mpnews.com.au CRITTENDEN Estate in Dromana has won international recognition for its efforts to achieve sustainability in making wines. The estate has won the 2020 BRIT/ FIVS international winegrowing competition in the wake of a decision more than a decade ago to stop using chemicals. Estate manager Rollo Crittenden said soil fertility at the Harrisons Road vineyard dropped noticeably about 12 years ago following 25 years’ use of herbicides, pesticides and fungicides. Chemical residues had made the soil “chalky” and lacking in nutrients, which led to vines being “not as healthy as they could be”. The decision to adopt other ways of improving the soil and crop has now culminated in winning the BRIT/ FIVS competition, jointly run by the Botanical Research Institute of Texas and FIVS, a Paris-based international federation of sustainability-minded wine organisations. The award was based on the winery’s programs addressing the three elements of sustainability - environmental, economic, and social – as well as its wine’s flavour. The award recognised the quality of the estate’s 2017 Cri de Coeur pinot noir, submitted as proof of the success of Crittenden Estate’s commitment and innovation in sustainable winemaking. “The combination of sustainable

received a platinum multi-brand sustainable winegrowing award. Rollo Crittenden said the move to make Crittenden Estate “regenerative” involved producing compost on site and inter-row cropping – planting peas, oats and rye grass between the rows of vines. “The root systems of these plants have a beneficial fungus that spreads to the root systems of the vines,” he said. “There was a gradual, but noticeable, increase in the health of our vines. “We have healthier, disease resist-

ant vines from creating a healthier environment.” The fungus spread by the inter-vine plantings helps the vines combat mildew in their canopies. Crittenden says the estate is “not at the finish line [of sustainability] by any means”. “We’re trying to understand the science and implementing a regenerative system throughout our business.” The estate uses recycled water from the pipeline that runs close to the property from its source at the eastern treatment plant in Bangholme to an

ocean outfall at Gunnamatta. Bees from two beehives on the property to pollinate “desirable fruiting trees” and solar panels have led to a 60 per cent reduction in energy costs. Rollo Crittenden’s father Garry planted the estate’s first vines in 1982. That two-hectare vineyard more than doubled the amount of land planted with grapevines in the area. While still involved with the estate, Garry Crittenden has handed control to his son Rollo and daughter Zoe, who have continued his passion for exploring the possibilities of introducing new grape varietals. Garry is recognised of being the first Australian winemaker to make commercial quantities of such Italian wines as barbera, nebbilio, docetto and sangiovese and his son and daughter have continued that pioneering tradition by introducing some Spanish grape varieties. Garry Crittenden was inducted as a Melbourne Food and Wine Festival “legend” in 2012 and Rollo was in 2010 named Australian Young Gun of Wine. Rollo Crittenden said winning the BRIT/FIVS award (which he’ll go to the United States to collect it in January) was “humbling … given the calibre of our fellow entrants”.

Can History repeat itself in Mt Martha? THE question being asked is “can history repeat itself in Mt Martha” with the appointment of Gary Sanford as Mt Martha Community Bank Branch Manager? With the pending retirement of Kerry Debenardi the current Mt Martha Community Bank Branch Manager on the 31st December Gary has accepted the Branch Managers position and will officially start his induction on Monday 16th. In March 2001 Gary became the inaugural Branch Manager of the Rye & District Community Bank branch, which expanded to open the Dromana Community Bank branch in 2007 and the Rosebud Community Bank branch in 2013, all under Gary’s management. This has been a success story within the Community Bank network that saw this Group become one of the largest Community Bank companies in Australia. With over $10 Million funded back to local not for profit community groups and its shareholders, we can only hope that similar success can be achieved with Gary’s engagement with the local Mt Martha community. Gary said “ The last 18 years of my 43 year banking career have increased my enjoyment of being involved in looking after customers finance and banking needs to a very high level of satisfaction. I am very passionate about the Community Bank model and how it works to provide a win win for everyone, particularly the local community.” Gary has lived on the Mornington Peninsula for over 55 years and is well known through his engagements with many community groups and sporting clubs. He has resided in Mt Martha for the last 29 years, where he has raised his 4 daughters with his also well known supporting wife Bronwyn. They now have two grandchildren and are both enjoying this stage of their lives. Gary said “ I am really looking forward to building on the foundations that have been established with the Mt Martha Community Bank,