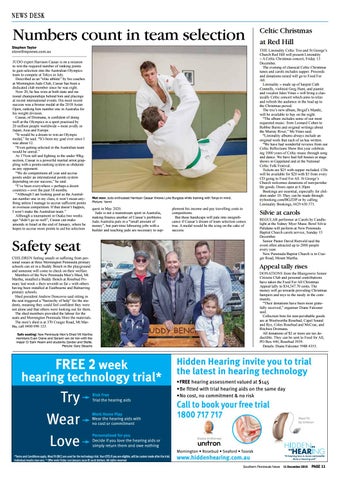 Numbers count in team selection Stephen Taylor steve@mpnews.com.au JUDO expert Harrison Cassar is on a mission to win the required number of ranking points to gain selection into the Australian Olympics team to compete at Tokyo in July. Described as an “elite athlete” by his coaches at Mornington Judo Club, Cassar has been a dedicated club member since he was eight. Now 20, he has wins at both state and national championships behind him and placings at recent international events. His most recent success was a bronze medal at the 2018 Asian Open, ranking him number one in Australia for his weight division. Cassar, of Dromana, is confident of doing well at the Olympics in a sport practised by 20 million people worldwide – most avidly in Japan, Asia and Europe. “It would be a dream to win an Olympic medal,” he said. “It’s been my goal ever since I was about 12. “Even getting selected in the Australian team would be unreal.” At 175cm tall and fighting in the under 90kg section, Cassar is a powerful martial artist grappling with a points-ranking system as obdurate as any opponent. “We do competitions all year and accrue points under an international points system depending on our success,” he said. “I’ve been everywhere – perhaps a dozen countries – over the past 18 months. “Although I am looking good as the Australian number one in my class, it won’t mean anything unless I manage to accrue sufficient points in overseas competition. If that doesn’t happen, I won’t make the Australian team.” Although a tournament in Osaka two weeks ago “didn’t go so well”, Cassar can make amends in Israel at the end of January, where he hopes to accrue more points to aid his selection

quest in May 2020. Judo is not a mainstream sport in Australia, making finance another of Cassar’s problems. Judo Australia puts in a “small amount of money”, but part-time labouring jobs with a builder and teaching judo are necessary to sup-

plement his income and pay travelling costs to competitions. But these handicaps will pale into insignificance if Cassar’s dream of team selection comes true. A medal would be the icing on the cake of success.

Safety seat CHILDREN feeling unsafe or suffering from personal issues at three Mornington Peninsula primary schools can sit in a Buddy Bench in the playground and someone will come to check on their welfare. Members of the New Peninsula Men’s Shed, Mt Martha, installed a Buddy Bench at Rosebud Primary last week – their seventh so far – with others having been installed at Eastbourne and Balnarring primary schools. Shed president Andrew Doncovio said sitting in the seat triggered a “hierarchy of help” for the students, meaning they could feel confident they were not alone and that others were looking out for them. The shed members provided the labour for the seats and Mornington Peninsula Shire the materials. The men’s shed is at 370 Craigie Road, Mt Martha, call 0400 090 123.

THE Liminality Celtic Trio and St George’s Church Red Hill will present Liminality ~ A Celtic Christmas concert, Friday 13 December. The evening of classical Celtic Christmas tunes and carols includes supper. Proceeds and donations raised will go to Food For All. Liminality – made up of harpist Cath Connelly, violinist Greg Hunt, and pianist and vocalist Jules Vines – will bring a classically Celtic concert which aims to relax and refresh the audience in the lead up to the Christmas period. The trio’s new album, Brigid’s Mantle, will be available to buy on the night. “The album includes some of our most requested music: from Leonard Cohen to Robbie Burns and original writings about the Murray River,” Ms Vines said. “Liminality albums always include an original work that each of us has written. “We have had wonderful reviews from our Celtic Reflections Show this year celebrating 1000 years of Celtic music through song and dance. We have had full houses at stage shows in Gippsland and at the National Celtic Folk Festival. Tickets are $25 with supper included. CDs will be available for $20 with $5 from every CD going to Food For All. St George’s Church welcomes donations of non-perishable goods. Doors open at 6.30pm Bookings are essential, especially for children under 10. They can be made through trybooking.com/BGZDP or by calling Liminality Bookings, 0429 650 571.

Appeal tally rises DONATIONS from the Blairgowrie Senior Citizens Club and personal contributions have taken the Food For All Christmas Appeal tally to $34,547.70 cents. The money will go towards providing Christmas hampers and toys to the needy in the community. “Their donations have been most gratefully received,” organiser Diane Falconer said. Collection bins for non-perishable goods are at Woolworths Rosebud, Capel Sound and Rye, Coles Rosebud and McCrae, and Ritchies Dromana. All donations of $2 or more are tax deductible. They can be sent to Food for All, PO Box 440, Rosebud 3939. Details: Diane Falconer 5988 4353.

Hidden Hearing invite you to trial the latest in hearing technology • FREE hearing assessment valued at $145 • Be fitted with trial hearing aids on the same day • No cost, no commitment & no risk

*Terms and Conditions apply. Moxi Fit (RIC) are used for the technology trial. Your (ITE) if you are eligible, will be custom made after the trial. Individual results may vary. ^ Offer ends Friday 31st January 2020 © 2018 Unitron. All rights reserved