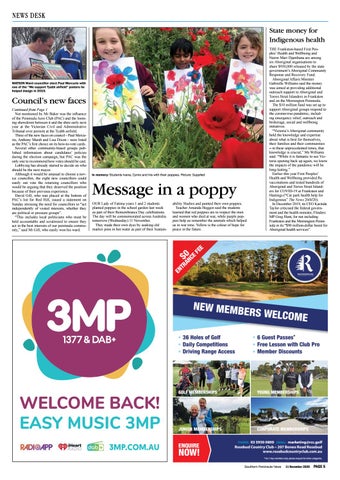 WATSON Ward councillor elect Paul Mercurio with one of the “We support Tyabb airfield” posters he helped design in 2019.

THE Frankston-based First Peoples’ Health and Wellbeing and Nairm Marr Djambana are among six Aboriginal organisations to share $930,000 released by the state government’s Aboriginal Community Response and Recovery Fund. Aboriginal Affairs Minister Gabrielle Williams said the money was aimed at providing additional outreach support to Aboriginal and Torres Strait Islanders in Frankston and on the Mornington Peninsula. The $10 million fund was set up to support Aboriginal groups respond to the coronavirus pandemic, including emergency relief, outreach and brokerage, social and wellbeing initiatives. “Victoria’s Aboriginal community hold the knowledge and expertise about what is best for themselves, their families and their communities – in these unprecedented times, that knowledge is crucial,” Ms Williams said. “While it is fantastic to see Victoria opening back up again, we know the impacts of the pandemic will be long-lasting.” Earlier this year First Peoples’ Health and Wellbeing provided flu vaccinations and tested hundreds of Aboriginal and Torres Strait Islanders for COVID-19 at Frankston and Hastings (“Car park health help for Indigenous” The News 20/4/20). In December 2019, its CEO Karinda Taylor criticised the federal government and the health minister, Flinders MP Greg Hunt, for not including Frankston and the Mornington Peninsula in its “$90 million-dollar boost for Aboriginal health services”.

In memory: Students Ivana, Cynric and Iris with their poppies. Picture: Supplied

Message in a poppy OUR Lady of Fatima years 1 and 2 students planted poppies in the school garden last week as part of their Remembrance Day celebrations. The day will be commemorated across Australia tomorrow (Wednesday) 11 November. They made their own dyes by soaking old marker pens in hot water as part of their Sustain-

ability Studies and painted their own poppies. Teacher Amanda Heggen said the students learned that red poppies are to respect the men and women who died at war, while purple poppies help us remember the animals which helped us in war time. Yellow is the colour of hope for peace in the future.

Continued from Page 1 Not mentioned by Mr Baker was the influence of the Peninsula Aero Club (PAC) and the looming showdown between it and the shire early next year at the Victorian Civil and Administrative Tribunal over permits at the Tyabb airfield. Three of the new faces on council - Paul Mercurio, Anthony Marsh and Lisa Dixon - were listed as the PAC’s first choice on its how-to-vote cards. Several other community-based groups published information about candidates’ policies during the election campaign, but PAC was the only one to recommend how votes should be cast. Lobbying has already started to decide on who should be the next mayor. Although it would be unusual to choose a novice councillor, the eight new councillors could easily out vote the returning councillors who would be arguing that they deserved the position because of their previous experience. David Gill, who was placed at the bottom of PAC’s list for Red Hill, issued a statement on Sunday stressing the need for councillors to “act independently of vested interests, whether they are political or pressure groups”. “This includes local politicians who must be held accountable and scrutinised to ensure they act in the best interests of our peninsula community,” said Mr Gill, who easily won his ward.