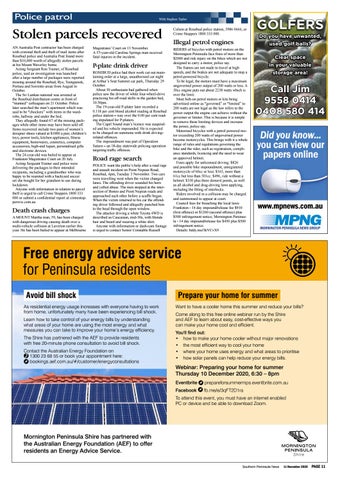 AN Australia Post contractor has been charged with criminal theft and theft of mail items after Rosebud police and Australia Post found more than $10,000 worth of allegedly stolen parcels at his Mount Waverley home. Acting Sergeant Ron Trainer, of Rosebud police, said an investigation was launched after a large number of packages were reported missing around the Rosebud, Rye, Tootgarook, Portsea and Sorrento areas from August to October. The Sri Lankan national was arrested at the Rosebud distribution centre in front of “stunned” colleagues on 21 October. Police later searched the man’s apartment which was said to be “chockers” with items in the wardrobe, hallway and under the bed. They allegedly found 67 of the missing packages while other items may have been sold off. Items recovered include two pairs of women’s designer shoes valued at $1000 a pair, children’s toys, power tools, kitchen appliances, fitness equipment, homewares, cosmetics, computer accessories, high-end liquor, personalised gifts and electronic devices. The 24-year-old was bailed to appear at Frankston Magistrates Court on 20 July. Acting Sergeant Trainer said police were delivering the packages to their intended recipients, including a grandmother who was happy to be reunited with a backyard soccer set she bought for her grandson to use during lockdown. Anyone with information in relation to parcel theft is urged to call Crime Stoppers 1800 333 000 or submit a confidential report at crimestoppersvic.com.au

RIDERS of bicycles with petrol motors on the Mornington Peninsula face fines of more than $2000 and risk injury on the bikes which are not designed to carry a motor, police say. The frames are not made to travel at high speeds, and the brakes are not adequate to stop a petrol-powered bicycle. To be legal, the motors must have a maximum ungoverned power output of 200 watts or less. A 50cc engine puts out about 2238 watts which is over the limit. Most bolt-on petrol motors or kits being advertised online as “governed” or “limited” to 200 watts are not legal as the law refers to the power output the engine can achieve without the governor or limiter. This is because it is simple to remove these limiting devices and increase the power, police say. Motorised bicycles with a petrol powered motor exceeding 200 watts of ungoverned power become motorcycles. This brings with it a whole range of rules and regulations governing the bike and the rider, such as registration, compliance standards, licencing and the need to wear an approved helmet. Fines apply for unlicensed driving: $826 and possible bike impoundment, unregistered motorcycle of 60cc or less: $165, more than 61cc but less than 501cc: $496, ride without a helmet: $330 plus three demerit points, as well as all alcohol and drug-driving laws applying, including the fitting of interlocks. Riders involved in a collision may be charged and summonsed to appear at court. Council fees for breaching the local laws: Frankston - 14 day impound/release fee $910 (first offence) or $1260 (second offence) plus $500 infringement notice; Mornington Peninsula - 14 day impound/release fee $450 plus $500 infringement notice. Details: bddy.me/3kVCvX9

Death crash charges A MOUNT Martha man, 59, has been charged with dangerous driving causing death over a multi-vehicle collision at Laverton earlier this year. He has been bailed to appear at Melbourne

P-plate drink driver ROSEBUD police had their work cut out maintaining order at a large, unauthorised car night at Arthur’s Seat Summit car park, Thursday 29 October. About 30 enthusiasts had gathered when police saw the driver of white four-wheel-drive practicing his off-road skills in the garden bed, 10.50pm. The 19-year-old P-plater later recorded a 0.118 per cent blood alcohol reading at Rosebud police station – way over the 0.00 per cent reading stipulated for P-platers. The Capel Sound man’s licence was suspended and his vehicle impounded. He is expected to be charged on summons with drink drivingrelated offences. The impoundment was part of Operation Saturn – an 18-day statewide policing operation targeting traffic offences.

Road rage search POLICE want the public’s help after a road rage and assault incident on Point Nepean Road, Rosebud, 4pm, Tuesday 3 November. Two cars were travelling west when the victim changed lanes. The offending driver sounded his horn and yelled abuse. The men stopped at the intersection of Boneo and Point Nepean roads and approached each other before a scuffle began. When the victim returned to his car the offending driver followed and allegedly punched him to the head through the open window. The attacker driving a white Toyota 4WD is described as Caucasian, mid-30s, with blonde hair and beard and wearing a white shirt. Anyone with information or dash-cam footage is urged to contact Senior Constable Russell

GOLFERS Do you have unwanted, used golf balls? Clear space in your valuable storage area! area!

Free energy advice service for Peninsula residents Avoid bill shock As residential energy usage increases with everyone having to work from home, unfortunately many have been experiencing bill shock. Learn how to take control of your energy bills by understanding what areas of your home are using the most energy and what measures you can take to improve your home’s energy efficiency. The Shire has partnered with the AEF to provide residents with free 20-minute phone consultation to avoid bill shock. Contact the Australian Energy Foundation on 1300 23 68 55 or book your appointment here: bookings.aef.com.au/#/customer/energyconsultations

Prepare your home for summer Want to have a cooler home this summer and reduce your bills? Come along to this free online webinar run by the Shire and AEF to learn about easy, cost-effective ways you can make your home cool and efficient. You&#39;ll find out: • how to make your home cooler without major renovations • the most efficient way to cool your home • where your home uses energy and what areas to prioritise • how solar panels can help reduce your energy bills.

To attend this event, you must have an internet enabled PC or device and be able to download Zoom.