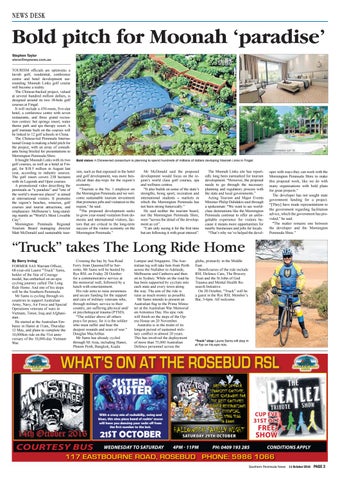 Bold pitch for Moonah ‘paradise’ Stephen Taylor steve@mpnews.com.au TOURISM officials are optimistic a lavish golf, residential, conference centre and hotel development surrounding Moonah Links golf course will become a reality. The Chinese-backed project, valued at several hundred million dollars, is designed around its two 18-hole golf courses at Fingal. It will include a 450-room, five-star hotel, a conference centre with seven restaurants, and three grand recreation centres: hot springs resort, water theme park and spa therapy resort. A golf institute built on the courses will be linked to 12 golf schools in China. The Chinese-led Peninsula International Group is making a bold pitch for the project, with an array of consultants being briefed for presentations to Mornington Peninsula Shire. It bought Moonah Links with its two golf courses, as well as a hotel at Fingal, for $18.5 million in August last year, according to industry sources. The golf resort covers 238 hectares with its Legends and Open courses. A promotional video describing the peninsula as “a paradise” and “one of the world’s must-see places” is aimed at international visitors. It promotes the region’s beaches, wineries, golf courses and tourist attractions, and emphasises Melbourne’s long-standing mantle as “World’s Most Liveable City”. Mornington Peninsula Regional Tourism Board managing director Matt McDonald said sustainable tour-

Bold vision: A Chinese-led consortium is planning to spend hundreds of millions of dollars devloping Moonah Links in Fingal.

ism, such as that espoused in the hotel and golf development, was more beneficial than day-trips for the region’s economy. “Tourism is the No. 1 employer on the Mornington Peninsula and we welcome sustainable tourism investment that promotes jobs and visitation to the region,” he said. “The proposed development seeks to grow year-round visitation from domestic and international visitors, factors that are critical to the long-term success of the visitor economy on the Mornington Peninsula.”

Mr McDonald said the proposed development would focus on the region’s world class golf courses, spa and wellness centres. “It also builds on some of the state’s strengths, being sport, recreation and international students – markets in which the Mornington Peninsula has not been strong historically.” He said neither the tourism board, nor the Mornington Peninsula Shire, were “across the detail of the development as yet”. “I am only seeing it for the first time but am following it with great interest”.

The Moonah Links site has reportedly long been earmarked for tourism development. “However, the proposal needs to go through the necessary planning and regulatory process with the state and local governments.” Acting Tourism and Major Events Minister Philip Dalidakis said through a spokesman: “We want to see worldclass destinations like the Mornington Peninsula continue to offer an unforgettable experience for visitors because it means more opportunities for nearby businesses and jobs for locals. “That’s why we’ve helped the devel-

oper with ways they can work with the Mornington Peninsula Shire to make this proposal work, like we do with many organisations with bold plans for great projects.” The developer has not sought state government funding for a project. “[They] have made representations to the government regarding facilitation advice, which the government has provided,” he said. “The matter remains one between the developer and the Mornington Peninsula Shire.”

“Truck” takes The Long Ride Home By Barry Irving FORMER SAS Warrant Officer, 68-year-old Laurie “Truck” Sams, holder of the Star of Courage medal, has embarked on an epic cycling journey called The Long Ride Home. And one of his stops will be the Southern Peninsula. Mr Sams is cycling through six countries to support Australian Army, Navy, Air Force and Special Operations veterans of wars in Vietnam, Timor, Iraq and Afghanistan. He started at the Australian Embassy in Hanoi at 11am, Thursday 12 May, and plans to complete the 10,000km ride on the 51st anniversary of the 10,000-day Vietnam War.

Crossing the bay by Sea Road Ferry from Queenscliff to Sorrento, Mr Sams will be hosted by Rye RSL on Friday 28 October for a commemorative service at the memorial wall, followed by a lunch with entertainment. His ride aims to raise awareness and secure funding for the support and care of military veterans who, through military service to their country, are suffering physical and/ or psychological trauma (PTSD). “The soldier above all others prays for peace, for it is the soldier who must suffer and bear the deepest wounds and scars of war:” Douglas MacArthur. Mr Sams has already cycled through SE Asia, including Hanoi, Phnom Penh, Bangkok, Kuala

Lumpur and Singapore. The Australian leg will take him from Perth across the Nullabor to Adelaide, Melbourne and Canberra and then on to Sydney. While on the road he has been supported by cyclists into each state and every town along the way. The aim of the ride is raise as much money as possible. Mr Sams intends to present an Australian flag to the Prime Minister at the Australian War Memorial on Armistice Day. His epic ride will finish on the steps of the Opera House on 20 November. Australia is in the midst of its longest period of sustained military conflict in almost 20 years. This has involved the deployment of more than 75,000 Australian Defence personnel across the

With a crazy mix of rockabilly, swing and blues, this nine piece band of rockin’ musos will have you dancing your socks off from WKHÀUVWQXPEHUWRWKHODVW

globe, primarily in the Middle East. Beneficiaries of the ride include RSL Defence Care, The Bravery Trust and the St John of God Trauma and Mental Health Research Initiative. On 28 October, “Truck” will be a guest in the Rye RSL Member’s Bar, 5-6pm. All welcome.

“Truck” stop: Laurie Sams will stop in at Rye on his epic ride.

DRESS UP IN YOUR SPOOKIEST COSTUME. PRIZE GIVEAWAYS FOR THE BEST COSTUMES DINNER RESERVATIONS ARE ESSENTIAL. CALL 5986 1066 TO BOOK