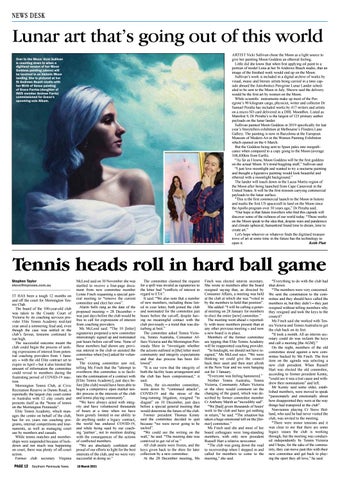 Lunar art that’s going out of this world ARTIST Vicki Sullivan chose the Moon as a light source to give her painting Moon Goddess an ethereal feeling. Little did she know that when first applying oil paint to a portrait of model Lena at her St Andrews Beach studio, that an image of the finished work would end up on the Moon. Sullivan’s work is included in a digital archive of works by visual, music and literary artists being carried in a time capsule aboard the Astrobiotics Peregrine Lunar Lander scheduled to be sent to the Moon in July. Sheww said the delivery would be the first art by women on the Moon. While scientific instruments make up most of the Peregrine’s 90 kilogram cargo, physicist, writer and collector Dr Samuel Peralta has included works by 417 writers and artists on a micro SD card delivered in a DHL MoonBox. Listed as Manifest 9, Dr Peralta’s is the largest of 125 primary author payloads on the lunar lander. Sullivan painted Moon Goddess in 2019 specifically for last year’s Storytellers exhibition at Melbourne’s Flinders Lane Gallery. The painting is now in Barcelona at the European Museum of Modern Art in the Women Painting Exhibition which opened on the 6 March. But the Goddess being sent to Spain pales into insignificance when compared to a copy going to the Moon (average 348,400km from Earth). “As far as I know, Moon Goddess will be the first goddess on the actual Moon. It’s mind boggling stuff,” Sullivan said. “I just love moonlight and wanted to try a nocturne painting and thought a figurative painting would look beautiful and ethereal with a moonlight background.” The lander will touch down in the Lacus Mortis region of the Moon after being launched from Cape Canaveral in the United States. It will be the first mission carrying commercial payloads to the lunar surface. &quot;This is the first commercial launch to the Moon in history and marks the first US spacecraft to land on the Moon since the Apollo program over 50 years ago,” Dr Peralta said. “Our hope is that future travellers who find this capsule will discover some of the richness of our world today. “These works on the Moon speak to the idea that, despite wars and pandemics and climate upheaval, humankind found time to dream, time to create art.” Let&#39;s hope whoever or whatever finds the digitised treasure trove of art at some time in the future has the technology to open it. Keith Platt

Over to the Moon: Vicki Sullivan is counting down to when a digitised version of her Moon Goddess painting (above) will be involved in an historic Moon landing. She is pictured at her St Andrews Beach studio with her Birth of Venus painting of Grace Farriss (daughter of INXS member Andrew Farris) commissioned for Grace’s upcoming solo Album.

Tennis heads roll in hard ball game Stephen Taylor steve@mpnews.com.au IT HAS been a tough 12 months on and off the court for Mornington Tennis Club. The board of the 100-year-old club was taken to the County Court of Victoria by its coaching services provider Elite Tennis Academy mid-last year amid a simmering feud and, even though the case was settled in the club’s favour, tensions continued to run high. The successful outcome meant the club could begin the process of seeking expressions of interest from potential coaching providers from 1 January – with the old Elite contract set to expire in April – but it also limited the amount of information the committee could reveal to members during the frustrating period of COVID-19 inaction. Mornington Tennis Club, at Civic Recreation Reserve in Dunns Road, is reportedly the largest clay court centre in Australia with 12 clay courts and presents itself as the “home of tennis on the Mornington Peninsula”. Elite Tennis Academy, which manages the centre on behalf of the club, has for six years run coaching programs, internal competitions and tournaments, as well as managing court use by members and casuals. While tennis matches and memberships were suspended because of lockdown and not much was happening on court, there was plenty of off-court action. Former club secretary Virginia

McLeod said on 30 November she was startled to receive a four-page document from new committee member Lynne Finch requesting a special general meeting to “remove the current committee and elect her own”. Alarm bells rang as the date of the proposed meeting – 28 December – was just days before the club would be free to call for expressions of interest from coaching providers. Ms McLeod said: “The 10 [letter] signatories proposed a new committee interestingly signed up and nominated just hours before cut-off time. None of these members had shown any previous interest in the club or assisted the committee when [we] asked for volunteers.” The existing committee saw red, telling Ms Finch that the “attempt to overthrow this committee is to facilitate the continuation of a contract with [Elite Tennis Academy], just days before [the club] would have been able to begin a competitive open market tender process in the interests of the club and tennis playing community”. “We have always acted with integrity and have volunteered thousands of hours at a time when we have been grossly limited in our ability to do anything under a legacy contract, the world has endured COVID-19, and while being sued by our coaching ‘partner’, not to mention dealing with the consequences of the actions of conflicted members. “We are absolutely confident and proud of our efforts to fight for the best interests of the club, and we were very successful in doing so.” 10 March 2021

The committee claimed the request for a spill was invalid as signatories to the letter had “conflicts of interest in regard to ETA”. It said: “We also note that a number of new members, including those listed in your letter, both joined the club and nominated for the committee just hours before the cut-off, despite having no meaningful contact with the club previously – a trend that was disturbing at best.” The committee asked Tennis Victoria, Tennis Australia, Consumer Affairs Victoria and the Mornington Peninsula Shire to “investigate whether the actions outlined in [the] letter meet community and integrity expectations and that due process has been followed”. “It is our view that the integrity of both the facility lease arrangement and the club has been compromised,” it said. Then, the six-member committee, worn down by “continued attacks”, COVID-19 and the stress of the long-running litigation, resigned “in disgust” on 10 December, just days before a special general meeting that would determine the future of the club. Former president Thomas Kenny said the committee decided to quit because “we were never going to be sacked”. “We could see the writing on the wall,” he said. “The meeting date was contrived to get rid of us.” All club assets were frozen, and the keys given back to the shire for later collection by a new committee. At the 28 December meeting, Ms

Finch was elected interim secretary. She wrote to members after the board resigned saying that, as directed by Consumer Affairs, a meeting was held at the club at which she was “voted in by the members to hold that position”. She added: “I will be calling a general meeting on 28 January for members to elect the entire [new] committee.” The meeting went ahead – reportedly with more members present than at any other previous meeting – and now a new board is in place. Members of the former committee are tipping that Elite Tennis Academy will be reappointed coaching provider. “In hindsight, we should not have resigned,” Ms McLeod says. “We were thinking we could give the council back their asset and then start afresh in the New Year and we were hanging out for 1 January. “Everyone was feeling hammered.” Neither Tennis Australia, Tennis Victoria, Community Affairs Victoria or the shire would comment on the changing of the guard, which was described by former committee member Cr Anthony Marsh as “incredibly sad”. “We [had] given thousands of hours&#39; work to the club and have got nothing in return,” he said. “The situation has taken a huge emotional toll on the [former] committee.” Ms Finch said she and most of her board colleagues were long-standing members, with only new president Russell Hart a relative newcomer. “The club was going down the road to receivership when I stepped in and called for members to come to the meeting,” she said.

“Everything to do with the club had shut down. “The members were very concerned. We sent the constitution to the committee and they should have called the members in, but they didn’t – they just resigned without telling members why they resigned and took the keys to the council? Ms Finch said she worked with Tennis Victoria and Tennis Australia to get the club back on its feet. “It took a month. All an interim secretary could do was reclaim the keys and call a meeting [the AGM].” On the night, members of the old committee stood against a new committee backed by Ms Finch. The first item on the agenda was selecting a new club president. When Russell Hart was elected the old committee, according to former president Kenny, “could see it was a lost cause and withdrew their nominations” and left. Mr Kenny said some older, established members, were moved to speak “passionately and emotionally about how disappointed they were at the way things had transpired at the club”. Non-tennis playing Cr Steve Holland, who said he had never visited the club, was invited to the meeting. “There were minor tensions and it was clear to me that there are some legacy issues the club is working through, but the meeting was conducted independently by Tennis Victoria and I hope, for the sake of the community, they can move past this with their new committee and get back to playing the sport they all love,” he said.