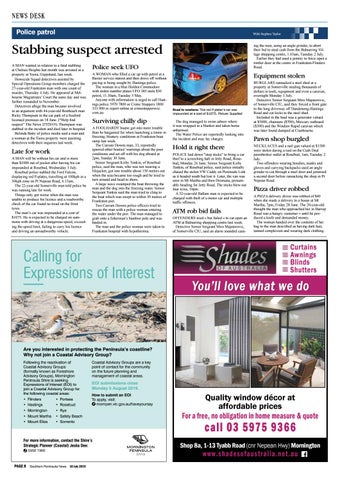 Stabbing suspect arrested A MAN wanted in relation to a fatal stabbing at Chelsea Heights last month was arrested at a property at Toora, Gippsland, last week. Homicide Squad detectives assisted by Special Operations Group members charged the 27-year-old Frankston man with one count of murder, Thursday 4 July. He appeared at Melbourne Magistrates’ Court the same day and was further remanded to November. Detectives allege the man became involved in an argument with 44-year-old Bonbeach man Ricky Thompson in the car park of a Seaford licensed premises on 18 June. (“Help find suspect” The News 2/7/2019). Thompson was stabbed in the incident and died later in hospital. Belinda Batty of police media said a man and a woman at the Toora property were assisting detectives with their inquiries last week.

Late for work A MAN will be without his car and is more than $1000 out of pocket after having his car impounded at Rosebud, Wednesday 3 July. Rosebud police nabbed the Ford Falcon, displaying red P-plates, travelling at 100kph in a 50kph zone on Pt Nepean Road, 6.15am. The 22-year-old Somerville man told police he was running late for work. Things only got worse when the man was unable to produce his licence and a roadworthy check of the car found no tread on the front tyres. The man’s car was impounded at a cost of $1075. He is expected to be charged on summons with driving at a dangerous speed, exceeding the speed limit, failing to carry his licence and driving an unroadworthy vehicle.

ing the men, using an angle grinder, to abort their bid to steal cash from the Balnarring Village shopping centre, 1.45am, Tuesday 2 July. Earlier they had used a jemmy to force open a timber door at the centre in Frankston-Flinders Road.

Police seek UFO A WOMAN who filled a car up with petrol at a Baxter service station and then drove off without paying is being sought by Hastings police. The woman in a blue Holden Commodore with stolen number plates UFO 385 stole $30 petrol, 11.30am, Tuesday 5 May. Anyone with information is urged to call Hastings police 5970 7800 or Crime Stoppers 1800 333 000 or report online at crimestoppersvic. com.au

Surviving chilly dip A FOOLHARDY boatie got into more trouble than he bargained for when launching a tinnie in freezing, blustery conditions at Frankston boat ramp last week. The Carrum Downs man, 33, reportedly ignored other boaties’ warnings about the poor conditions and set off with his dog aboard at 2pm, Sunday 30 June. Senior Sergeant Kirby Tonkin, of Rosebud police, said the man, who was not wearing a lifejacket, got into trouble about 150 metres out when the seas became too rough and he tried to turn around and head to shore. A large wave swamped the boat throwing the man and the dog into the freezing water. Senior Sergeant Tonkin said the man tried to cling to the boat which was swept to within 30 metres of Frankston pier. Two Carrum Downs police officers tried to rescue the man with a police woman entering the water under the pier. The man managed to grab onto a fisherman’s bamboo pole and was hauled in. The man and the police woman were taken to Frankston hospital with hypothermia.

Calling for Expressions of Interest

Road to nowhere: This red P-plater’s car was impounded at a cost of $1075. Picture: Supplied

The dog managed to swim ashore where it was wrapped in a blanket and taken home unharmed. The Water Police are reportedly looking into the incident and may lay charges.

Hold it right there POLICE laid down “stop sticks” to bring a car thief to a screeching halt in Jetty Road, Rosebud, Monday 24 June. Senior Sergeant Kirby Tonkin, of Rosebud police, said police initially chased the stolen VW Caddy on Peninsula Link as it headed south but lost it. Later, the van was seen in Mt Martha and then Dromana, presumably heading for Jetty Road. The sticks blew out four tyres, 10pm. A 32-year-old Hallam man is expected to be charged with theft of a motor car and multiple traffic offences.

BURGLARS ransacked a steel shed at a property at Somerville stealing thousands of dollars in tools, equipment and even a caravan, overnight Monday 1 July. Detective Senior Sergeant Miro Majstorovic, of Somerville CIU, said they forced a front gate to the long driveway off Dandenong-Hastings Road and cut locks to the steel shed. Included in the haul was a generator valued at $5000, chainsaw ($700), Mercury outboard ($500) and the Windsor Rapid caravan which was later found dumped at Cranbourne.

Pawn shop burgled NECKLACES and a nail gun valued at $1500 were stolen during a raid on the Cash Deal pawnbroker outlet at Rosebud, 1am, Tuesday 2 July. Two offenders wearing hoodies, masks and gloves and carrying backpacks used an angle grinder to cut through a steel door and jemmied a second door before ransacking the shop in Pt Nepean Road.

Pizza driver robbed A PIZZA delivery driver was robbed of $40 when she made a delivery to a house at Mt Martha, 7pm, Friday 28 June. The 20-year-old thought the man who approached her in Harrop Road was a hungry customer – until he produced a knife and demanded money. The woman handed over the contents of her bag to the man described as having dark hair, tanned complexion and wearing dark clothing.

Coastal Advisory Groups are a key point of contact for the community on the future planning and management of coastal areas.