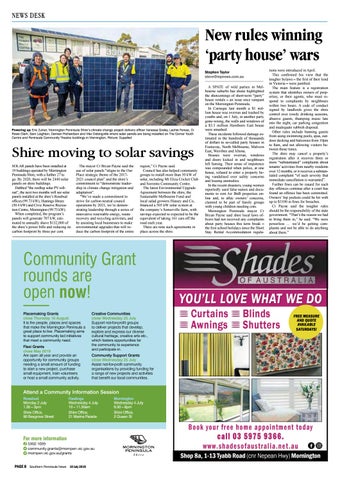 Shire moving to solar savings SOLAR panels have been installed at 19 buildings operated by Mornington Peninsula Shire, with a further 27 to go. By 2020, there will be 2440 solar panels on shire buildings. Dubbed “the rooftop solar PV rollout”, the next two months will see solar panels installed at the shire’s Rosebud offices (99.73 kW), Hastings library (50.4 kW) and Civic Reserve Recreation Centre, Mornington (99.73 kW). When completed, the program’s panels will generate 707 kW, estimated to annually shave $132,000 of the shire’s power bills and reducing its carbon footprint by three per cent.

The mayor Cr Bryan Payne said the use of solar panels “aligns to the Our Place strategic theme of the 20172021 council plan” and the shire’s commitment to “demonstrate leadership in climate change mitigation and adaptation”. “We’ve made a commitment to strive for carbon neutral council operations by 2021, we’re demonstrating leadership through a series of innovative renewable energy, waste recovery and recycling activities, and by assisting local businesses to make environmental upgrades that will reduce the carbon footprint of the entire

region,” Cr Payne said. Council has also helped community groups to install more than 50 kW of solar, including Mt Eliza Cricket Club and Sorrento Community Centre. The latest Environmental Upgrade Agreement between the shire, the Sustainable Melbourne Fund and local salad growers Hussey and Co, financed a 505 kW solar system at the company’s Somerville farm, with savings expected to expected to be the equivalent of taking 161 cars off the road each year. There are nine such agreements in place across the shire.

Community Grant rounds are open now! Placemaking Grants close Thursday 16 August It is the people, places and spaces that make the Mornington Peninsula a great place to live. Placemaking aims to support community led initiatives that meet a community need. Flexi Grants close May 2019 Are open all year and provide an opportunity for community groups needing a small amount of funding to start a new project, purchase small equipment, train volunteers or host a small community activity.

A SPATE of wild parties in Melbourne suburbs has shone highlighted the shotcomings of short-term “party” house rentals – an issue once rampant on the Mornington Peninsula. In Carnegie last month a $1 million house was overrun and trashed by youths and, on 1 July, in another party gone-wrong, the walls and windows of a $3.5 million Hawthorn East house were smashed. These incidents followed damage estimated in the hundreds of thousands of dollars to so-called party houses in Footscray, North Melbourne, Malvern East, Werribee and Altona. Houses were overrun, windows and doors kicked in and neighbours left fuming. Their sense of impotence was compounded when police, at one house, refused to enter a property being vandalised over safety concerns and leasing anomalies. In the recent disasters, young women reportedly used false names and documents to rent Air BnB properties online and, to allay owners’ concerns, claimed to be part of family groups with young children needing cots. Mornington Peninsula mayor Cr Bryan Payne said shire local laws officers had not received any complaints about party houses this term break – the first school holidays since the Short Stay Rental Accommodation regula-

tions were introduced in April. This confirmed his view that the tougher bylaws – the first of their kind in Victoria – were justified. The main feature is a registration system that identifies owners of properties, or their agents, who must respond to complaints by neighbours within two hours. A code of conduct signed by landlords gives the shire control over rowdy drinking sessions, abusive guests, thumping music late into the night, car parking congestion and inadequate rubbish disposal. Other rules include banning guests from using swimming pools, spas, outdoor decking and balconies from 10pm to 8am, and not allowing visitors between those times. The shire may cancel a property’s registration after it receives three or more “substantiated” complaints about tenants’ activities from nearby residents over 12 months, or it receives a substantiated complaint “of such severity that immediate cancellation is warranted”. Further fines can be issued for each day offences continue after a court has found an offence has been committed. Owners’ hip pockets could be hit with up to $3100 in fines for breaches. Cr Payne said the tougher rules should be the responsibility of the state government. “That’s the reason we had to bring them in,” he said. “We were powerless … we’d be getting complaints and not be able to do anything about them.”