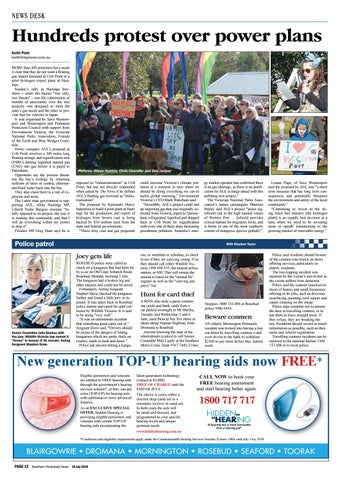 Hundreds protest over power plans Keith Platt keith@mpnews.com.au MORE than 400 protesters have made it clear that they do not want a floating gas import terminal at Crib Point or a pilot hydrogen export plant at Hastings. Sunday’s rally at Hastings foreshore – under the banner “one rally, two threats” - was the culmination of months of uncertainty over the two projects: one designed to meet the state’s gas needs and the other to provide fuel for vehicles in Japan. It was organised by Save Westernport and Westernport and Peninsula Protection Council with support from Environment Victoria, the Victorian National Parks Association, Friends of the Earth and Blue Wedges Coalition. Power company AGL’s proposal at Crib Point involves a 300 metre long floating storage and regasification unit (FSRU) turning liquefied natural gas (LNG) into gas before it is piped to Pakenham. Opponents say the process threatens the bay’s ecology by returning millions of litres of cooled, chlorinesterilised water back into the bay. They also claim there is a risk of explosion and noise. The Labor state government is supporting AGL, while Hastings MP, Liberal Neale Burgess remains “totally opposed to its project, the way it is treating this community and that I will do everything within my power to stop it”. Flinders MP Greg Hunt says he is

Pictures: Alison Hoelzer, Chris Chandler and Don Juniper opposed to “industrialisation” at Crib Point, but has not directly responded when asked by The News if he defines AGL’s floating gas terminal as “industrialisation”. The proposal by Kawasaki Heavy Industries to build a pilot plant at Hastings for the production and export of hydrogen from brown coal is being backed by $50 million each from the state and federal governments. “These dirty coal and gas proposals

could increase Victoria’s climate pollution at a moment in time when we should be doing everything we can to tackle global warming,” Environment Victoria’s CEO Mark Wakeham said. “Incredibly, AGL’s project could end up importing gas that was originally extracted from Victoria, piped to Queensland, refrigerated, liquefied and shipped back to Crib Point for regasification with every one of these steps increasing greenhouse pollution. Australia’s ener-

Louise Page, of Save Westernport said the proposal by AGL was “a short term measure that has long term consequences and potentially threatens the environment and safety of the local community”. “Continuing to invest in the dying fossil fuel industry [the hydrogen plant] is an equally bad decision at a time when we need to be investing more in rapidly transitioning to the growing market of renewable energy.”

Senior Constable Julia Starkey with the joey. Wildlife Victoria has named it “Drewy” in honour of its rescuer, Acting Sergeant Stephen Drew.

gy market operator has confirmed there is no gas shortage, so there is no justification for AGL to barge ahead with this polluting new project.” The Victorian National Parks Association’s nature campaigner Shannon Hurley said AGL’s project “poses significant risk to the high natural values of Western Port … [which] provides critical habitat for migratory birds, and is home to one of the most southerly extents of mangrove species globally”.

ROSEBUD police were called to check on a kangaroo that had been hit by a car on Old Cape Schanck Road, Rosebud, Monday morning 2 July. The kangaroo had a broken leg and other injuries and could not be saved. Fortunately, Acting Sergeant Stephen Drew checked the kangaroo further and found a little joey in its pouch. It was taken back to Rosebud police station and cared for until collected by Wildlife Victoria. It is said to be doing “very well”. “It was an unfortunate accident that something good came out of,” Sergeant Drew said. “Drivers should be aware of the dangers of hitting kangaroos which are pretty thick on country roads at dusk and dawn.” Police ask anyone hitting a kanga-

roo, or wombats or echidnas, to check to see if they are carrying young. If so they should call either Wildlife Victoria 1300 094 535, the nearest police station, or 000. This will ensure the animal is listed on the “animal hit” register as well as the “carrying any joeys” list.

Hunt for card thief A MAN who stole a purse containing credit and bank cards from a car parked overnight in Mt Martha, Tuesday and Wednesday 5 and 6 June, used them to buy five items at shops along Nepean Highway from Dromana to Rosebud. Anyone knowing the man or his whereabouts is asked to call Senior Constable Matt Caddy at the Southern Metro Crime Team 9767 7440, Crime

Beware conmen AN elderly Mornington Peninsula resident was tricked into having a tree cut down by travelling conmen – and even driven to the bank to withdraw $2500 to pay them before they started work.

Police said residents should beware of the conmen who knock on doors offering services, particularly to elderly residents. The tree-lopping incident was reported by the victim’s son-in-law as the victim suffers from dementia. Police said the conmen knocked on doors of homes and small businesses offering to do jobs, such as driveway resurfacing, painting, roof repairs and carpet cleaning on the cheap. Police urge residents not to answer the door to travelling conmen, or to ask them to leave straight away. If they refuse, they are breaking the law. Residents should record as much information as possible, such as their name and vehicle registration. Travelling conmen incidents can be reported to the national hotline 1300 133 408 or to local police.

latest generation technology (valued at $3,000) FREE OF CHARGE until the END OF JULY.