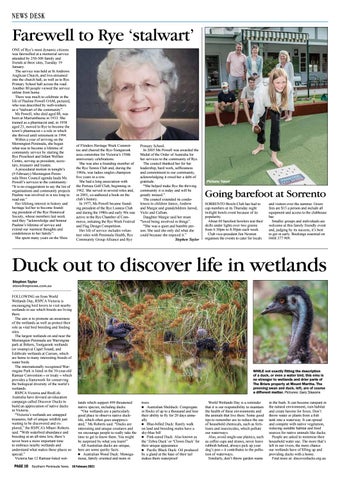 Farewell to Rye ‘stalwart’ ONE of Rye’s most dynamic citizens was farewelled at a memorial service attended by 250-300 family and friends at three sites, Tuesday 19 January. The service was held at St Andrews Anglican Church, and live-streamed into the church hall, as well as to Rye Primary School hall across the road. Another 80 people viewed the service online from home. There was much to celebrate in the life of Pauline Powell OAM, pictured, who was described by well-wishers as a “stalwart of the community”. Ms Powell, who died aged 88, was born at Murrumbeena in 1933. She trained as a pharmacist and, in 1958 aged 25, moved to Rye to become the town’s pharmacist – a role in which she thrived until retirement in 1994. Within a year of arriving on the Mornington Peninsula, she began what was to become a lifetime of community service by starting the Rye Preschool and Infant Welfare Centre, serving as president, secretary, treasurer and trustee. A procedural motion in tonight’s (9 February) Mornington Peninsula Shire Council agenda lauds Ms Powell’s services to the community: “It is no exaggeration to say the list of organisations and community projects Pauline was involved in is too long to read out.” Her lifelong interest in history and heritage led her to become founding president of the Rye Historical Society, whose members last week said they “acknowledge and honour Pauline’s lifetime of service and extend our warmest thoughts and condolences to her family”. She spent many years on the Shire

of Flinders Heritage Week Committee and chaired the Rye-Tootgarook area committee for Victoria’s 150th anniversary celebrations. She was also a founding member of the Rye Tennis Club and, during the 1960s, was ladies singles champion five years in a row. She had a long association with the Portsea Golf Club, beginning in 1962. She served in several roles and, in 2001, co-authored a book on the club’s history. In 1977, Ms Powell became founding president of the Rye Lioness Club and during the 1980s and early 90s was active in the Rye Chamber of Commerce, initiating the Rye Week Festival and Flag Design Competition. Her life of service includes volunteer roles with Peninsula Health, Rye Community Group Alliance and Rye

Primary School. In 2005 Ms Powell was awarded the Medal of the Order of Australia for her services to the community of Rye. The council thanked her for her leadership, hard work, selflessness and commitment to our community, acknowledging it owed her a debt of gratitude. “She helped make Rye the thriving community it is today and will be greatly missed.” The council extended its condolences to children Janice, Andrew and Margie and grandchildren Jarrod, Vicki and Callum. Daughter Margie said her mum “loved being involved in things”. “She was a quiet and humble person. She said she only did what she could because she enjoyed it.” Stephen Taylor

Going barefoot at Sorrento SORRENTO Bowls Club has had to cap numbers at its Thursday night twilight bowls event because of its popularity. About 60 barefoot bowlers test their skills under lights over two greens from 6.30pm to 8.30pm each week. Club vice-president Jim Newton organises the events to cater for locals

and visitors over the summer. Green fees are $15 a person and include all equipment and access to the clubhouse bar. Smaller groups and individuals are welcome at this family friendly event and, judging by its success, it’s best to get in early. Bookings essential on 0468 377 909.

Duck out to discover life in wetlands Stephen Taylor steve@mpnews.com.au FOLLOWING on from World Wetlands Day, RSPCA Victoria is encouraging bird lovers to visit nearby wetlands to see which breeds are living there. The aim is to promote an awareness of the wetlands as well as protect their role as vital bird breeding and feeding sites. The largest wetlands on and near the Mornington Peninsula are Warringine park at Bittern, Tootgarook wetlands (or swamp) at Capel Sound, and Edithvale wetlands at Carrum, which are home to many interesting breeds of water birds. The internationally recognised Warringine Park is listed in the 50-year-old Ramsar Convention – or treaty – which provides a framework for conserving the biological diversity of the world’s wetlands. RSPCA Victoria and BirdLife Australia have devised an education campaign called Discover Ducks to build an appreciation of native ducks in Victoria. “Victoria’s wetlands are untapped treasures, full of unique wildlife just waiting to be discovered and explored,” the RSPCA’s Mhairi Roberts said. “With waterbird abundance and breeding at an all-time low, there’s never been a more important time to embrace nearby wetlands and understand what makes these places so special.” Victoria has 12 Ramsar-listed wet-

WHILE not exactly fitting the description of a duck, or even a water bird, this emu is no stranger to wetlands and drier parts of The Briars property at Mount Martha. The preening swan and duck, left, are of course a different matter. Pictures: Gary Sissons lands which support 499 threatened native species, including ducks. “Our wetlands are a particularly good place to observe native ducklife, which often goes unappreciated,” Ms Roberts said. “Ducks are interesting and unique creatures and we encourage people to really take the time to get to know them. You might be surprised by what you learn!” All Australian ducks are unique, here are some quirky facts: n Australian Wood Duck: Monogamous, family oriented and nests in

trees Australian Shelduck: Congregate in flocks of up to a thousand and lose their ability to fly for 20 days annually n Blue-billed Duck: Rarely walk on land and breeding males have a sky-blue bill n Pink-eared Duck: Also known as the ‘Zebra Duck’ or ‘Clown Duck’ for their unique appearance n Pacific Black Duck: Oil produced by a gland at the base of their tail makes them waterproof n

World Wetlands Day is a reminder that it is our responsibility to maintain the health of these environments and the animals that live there. Some good tips to remember are to reduce the use of household chemicals, such as fertilisers and insecticides, which pollute our waterways. Also, avoid single-use plastics, such as coffee cups and straws, never leave rubbish behind, always pick up your dog’s poo – it contributes to the pollution of waterways. Similarly, don’t throw garden waste

in the bush. It can become rampant in the natural environment, ruin habitat and create havens for foxes. Don’t throw water or plants from a fish tank into a waterway. It can spread and compete with native vegetation, reducing suitable habitat and food sources for native animals like ducks. People are asked to minimise their household water use. The more that’s left in our rivers, the more chance our wetlands have of filling up and providing ducks with a home. Find more at: discoverducks.org.au