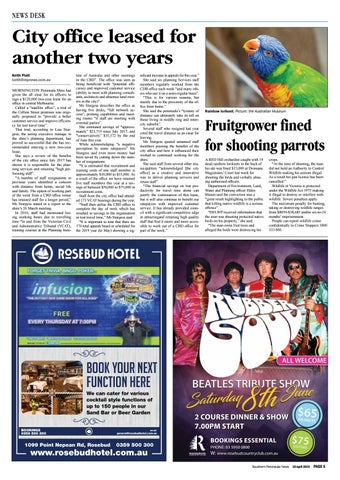 City office leased for another two years Keith Platt keith@mpnews.com.au MORNINGTON Peninsula Shire has given the all clear for its officers to sign a $120,000 two-year lease for an office in central Melbourne. Called a “satellite office”, a trial of the Collins Street premises was originally proposed to “provide a better customer service and improve efficiency for lost travel time”. That trial, according to Lisa Sturgess, the acting executive manage in the shire’s planning department, has proved so successful that she has recommended entering a new two-year lease. She says a review of the benefits of the city office since July 2017 has shown it is responsible for the planning services unit retaining “high performing staff”. “A number of staff resignations in previous years identified a concern with distance from home, social life and family. The option of working part of the week from a CBD office venue has retained staff for a longer period,” Ms Sturgess stated in a report to the shire’s 26 March meeting. In 2016, staff had mentioned losing working hours due to travelling time “to and from the Victorian Civil and Administrative Tribunal (VCAT), training courses at the Planning Insti-

tute of Australia and other meetings in the CBD”. The office was seen as being beneficial with “potential efficiency and improved customer service (ability to meet with planning consultants, architects and absentee land owners in the city)”. Ms Sturgess describes the office as having five desks, “full network access”, printing capabilities and meeting rooms “if staff are meeting with external parties”. She estimated savings of “approximately” $23,715 since July 2017, and “conservatively” $35,572 by the end of June this year. While acknowledging “a negative perception by some ratepayers” Ms Sturgess said even more money had been saved by cutting down the number of resignations. “It is estimated that recruitment and training costs of one staff member is approximately $10,000 to $15,000. As a result of the office we have retained five staff members this year at a savings of between $50,000 to $75,000 in recruitment costs. Staff from the city office had attended 173 VCAT hearings during the year. “Staff then utilise the CBD office to complete the day of work which has resulted in savings to the organisation in lost travel time,” Ms Sturgess said. “It is important to note that there are 174 total appeals heard or scheduled for the 2019 year (to May) showing a sig-

nificant increase in appeals for this year.” She said six planning Services staff members regularly worked from the CDB office each week “and many others who use it on a semi-regular basis”. “This is for various reasons, but mainly due to the proximity of the office from home.” She said the peninsula’s “tyranny of distance can ultimately take its toll on those living in middle ring and innercity suburbs”. Several staff who resigned last year cited the travel distance as an issue for leaving. Ms Sturgess quoted unnamed staff members praising the benefits of the city office and how it influenced their wished to continued working for the shire. She said staff from several other municipalities “acknowledged [the city office] as a creative and innovative way to deliver planning services and retain staff”. “The financial savings on lost productivity for travel time alone can justify the continuation of this lease, but it will also continue to benefit our ratepayers with improved customer service. It has already provided council with a significant competitive edge in attractingand retaining high quality staff that find it easier and more accessible to work out of a CBD office for part of the week.”

Fruitgrower fined for shooting parrots A RED Hill orchardist caught with 19 dead rainbow lorikeets in the back of his ute was fined $15,000 at Dromana Magistrates’ Court last week for shooting the birds and verbally abusing authorised officers. Department of Environment, Land, Water and Planning officer Haley Mason said the conviction was a “great result highlighting to the public that killing native wildlife is a serious offence”. “DELWP received information that the man was shooting protected native birds on his property,” she said. “The man owns fruit trees and alleged the birds were destroying his

crops. “At the time of shooting, the man did not hold an Authority to Control Wildlife making his actions illegal. As a result his gun licence has been cancelled.” Wildlife in Victoria is protected under the Wildlife Act 1975 making it illegal to destroy or interfere with wildlife. Severe penalties apply. The maximum penalty for hunting, taking or destroying wildlife ranges from $8059-$38,685 and/or six-to-24 months’ imprisonment. People can report wildlife crime confidentially to Crime Stoppers 1800 333 000.